Eggs Now Hottest Item to be Smuggled into U.S. from Mexico

Eggs Now Hottest Item to be Smuggled into U.S. from Mexico 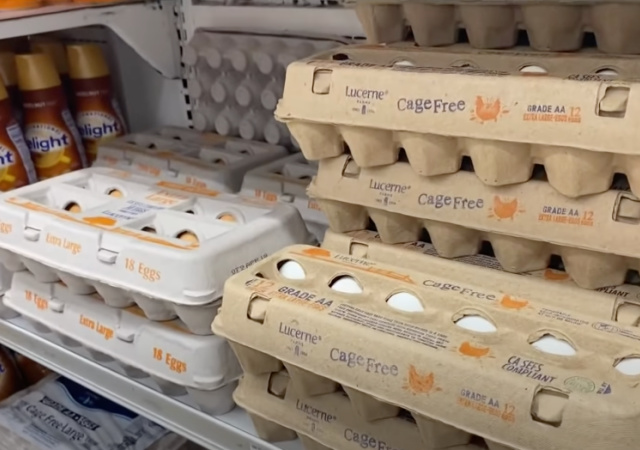 Legal Insurrection readers will recall that I reported on the serious egg shortages in the country this June, caused mainly by the spread of a severe type of avian flu paired with Bidenflation.

However, with challenges come opportunities. So rather than limiting themselves to the smuggling of drugs or illegal immigrants, smugglers are now bringing in eggs.

Traffickers are attempting to sneak thousands of Mexican “huevos” across the border per week after skyrocketing prices have made them a hot commodity, costing up to $8 per dozen in certain parts of America.

Customs and Border Protection (CBP) said they saw an uptick of 108% in egg seizures in the last three months of 2022, according to Border Report and violators end up having to shell out for a fine of up to $10,000.

Customs officers have seen many more cases “where the eggs were not declared and then discovered during an inspection,” CBP spokesman Roger Maier told the Post.

“When that happens the eggs are seized and the individual is assessed a $300 civil penalty,” he said, adding the $10,000 charge is only usually applied to repeat offenders or “commercial size imports.”

The San Diego Field Office has recently noticed an increase in the number of eggs intercepted at our ports of entry. As a reminder, uncooked eggs are prohibited entry from Mexico into the U.S. Failure to declare agriculture items can result in penalties of up to $10,000. pic.twitter.com/ukMUvyKDmL

U.S. regulators, farmers, and industry have often argued in recent years about the power of top agriculture firms to set prices and drive up what consumers pay for groceries, such as when the price of beef skyrocketed in 2021.

The latest concern is eggs, whose price was up 138% in December from a year prior, to $4.25 a dozen, according to the Bureau of Labor Statistics.

The U.S. Department of Agriculture (USDA) has pointed to a record outbreak of avian flu as a reason for the high prices. But the nation’s antitrust regulator should also examine record-high profits at the top egg company, said Farm Action on Thursday in a letter to FTC chair Lina Khan.

Cal-Maine Foods, which controls 20% of the retail egg market, reported quarterly sales up 110% and gross profits up more than 600% over the same quarter in the prior fiscal year, according to a late December filing with the Securities and Exchange Commission.

In the filing, the company pointed to decreased egg supply nationwide due to avian flu driving up prices as a reason for its record sales. The company has had no positive avian flu tests on any of its farms.

Instead of smuggling or complaining about prices, Americans are now raising their own chickens. A company that rents chicken says their business is now booming.

“Even if you buy the premium eggs at the store, the fresh eggs direct from your backyard will be superior every time,” says Jenn Tompkins of Armstrong County, co-founder of Rent the Chicken.

The rental price for the whole season can be as low as $500, so you do the math on how much you spend on eggs.

“I think they are really a delight in addition to the fact, of course, unlike our darling dogs and cats, they actually lay breakfast for us,” says Danovich.

Americans eat on the average over 280 eggs each year. Few foods are as perfect in their nutritional value, and those who can match supply with demand will clearly do well.

Lots of backyard chickens going on in Texas
Unfortunately I have 2 pits with high prey drive and live next to about 7 acres of raccoons, coyotes etc, little wilderness in the city, but my neighbors all
Lost their chickens to the coons, just slaughtered them, and they had them enclosed, guess they dug tunnels

I couldn’t bare that

My 2 pits , God was with them
That night, killed a monster water moc in my backyard, have a creek, I mean a monster, literally tore him in half

They should have been bitten and dead.

They tag teamed him from the wound on his neck, one held him there while the other literally tore him in half

If they’re like everthing else that is smuggled from there you better check what’s inside.

Smuggled eggs are good, not bad. The law is idiotic. “I have eggs. They need eggs. I can make a profit taking the eggs from here to there.”

Half the right and all of the left won’t like it but economics is filled with paradoxical effects.

Smuggling eggs across the border, huh? Why is this making me think of the “watch smuggling scene” in Pulp Fiction?

Is that the same as the old joke about smuggling wheelbarrows?

The latest concern is eggs, whose price was up 138% in December from a year prior, to $4.25 a dozen, according to the Bureau of Labor Statistics.

Locally here, the price to restaurants for eggs by the case is up about 4x that, as of this past week.

Funny, here the price has dropped significantly in the past week or so. It’s still crazy high, but not as high as it was two weeks ago.

I’m seeing weird price n availability differences across commodities, sources,
customers, n supply chains. A bunch of stuff that used to be broadly uniform, and consistent over time is become neither.

Variability seems to be the new normal. It’s like the whole supply web of formerly centrally orchestrated, efficient markets is encountering local variations and new information. We are finding out that supply webs *were* centrally orchestratable because people at the granular doing nodes were adapting locally.

Bird flu in our carefully regulated industrial ag is un-possible. This is why we keep out eggs from the hinterlands, and ban those dirty, dirty citizens from growing their own chickens. They have no idea what they’re doing. Things just spread. It’ll jump from one to the next, then we’ll have soaring prices and crashing availability.

This is the same reason we orchestrate n regulate supply chains and imports. Can’t have stuff just corking up…

What’s that? That’s exactly what’s happening? And we have all that authoritah?

So, all this industrial-farming, supply chain big-braining, regulation against personal chickening and USDA processing n treatment mandates we have is in principle so prices are low n consistent, supply stable, the herd n product healthy, and the ability to produce robust and resilient.

We’re getting none of that. It’s like the proclaiming and meddling is the point.

There are regs against personal chickening?! I mean other than local noise ordinances, which have nothing to do with agriculture or preventing disease.

Eggs have a long shelf life, especially if they are from your own chickens, t least 6 months. I had a flock of 54 2 years ago. Production of eggs drop in the winter, even stop. So it is best to have aa large number in the summer, we slaughter all the males when they hit appropriate size, either freezing or canning them. The idea is to produce enough eggs in the summer to cover use in winter. I have found it is better to process hens come winter.

For people living in the city, the number of chickens you can have are limited, usually 6, and many prohibit roosters. Personally I think it is good for people to rise from the call of roosters.

Non-responsive. I specifically said “other than local noise ordinances, which have nothing to do with agriculture or preventing disease.”.

Again, those are local ordinances that have nothing to do with agriculture or preventing disease, and thus cannot be what we are talking about.

“…other than local noise ordinances, which have nothing to do with agriculture or preventing disease.”

Happens all the time, including about chickens, with the rational of protecting agriculture system, or preventing disease. State, county, city or town. Friends were remodeling their chicken accommodations at city direction a couple years ago. They don’t sell anything to anybody, but some ag-guys about “health.”

Tnere’s a candidate researched paper on this to be had; not on my agenda right now to do it

Off the top of my head say city, county, or state that hit the news in my state, from say, one year before The Time of The ‘Rona touched on: chickens, mini pigs, and goats; honey, milk, eggs, and cheese; from state, county, and city.

They’re having issues with home gardening, too, including taking shots at roadside produce stands, or even give-aways.

Brilliant move by the smugglers: bringing in product almost everyone wants as well as maybe garnering a little sympathy from the American public for when the Feds harass them.

I knew something was up when I heard a rooster crowing one morning two houses down from mine.

Then, one evening, he showed up near my front yard. “Cock-a-doodle-do!” he greeted me.

“Are you sure you know what you’re looking for? I have seen no hens near my house…”

“Cock-a-doodle-do!” He continued to my neighbor’s yard.

I wonder if the HOA has any rules against his kind….

We did some looking into backyard poultry and decided to take a slightly different approach by raising ducks. While there are some considerations that are different with ducks vs chickens, I believe we have seen the advantage. The breed we chose is very cold weather hearty (below zero doesn’t phase them), lays consistently throughout the year. Production does not fall off as is seen with chickens. The product? larger eggs, robust taste we think is superior to chickens, and less susceptible to some predators. Look into this alternative, you just might be surprised.

I agree with your comments except that I like the taste of chicken meat, but not duck meat. When I was young I split a cow with an another family, but as I got older, I now eat very little beef. Besides, chickens are easy to raise, if you can keep coyotes, raccoons and possums away, I used a bunch of dog kennel 6′ x 10′ panels and a PVC Hoop House canopy with netting over the runs. I even caught one racoon who got tangled in the netting, others in live traps, 15 in one season. I had a black friend whom I gave all racoons, possums and large snapping turtles to. He butchered them here and I put the remains into maggot buckets where flies lay their eggs and larva crawl out, hungry chicken waiting to consume them,

Funny, isn’t it, that we have no eggs because of some supposed bird flu yet Mexico is awash with so many eggs that they’re being smuggled across. Hmmmmm.