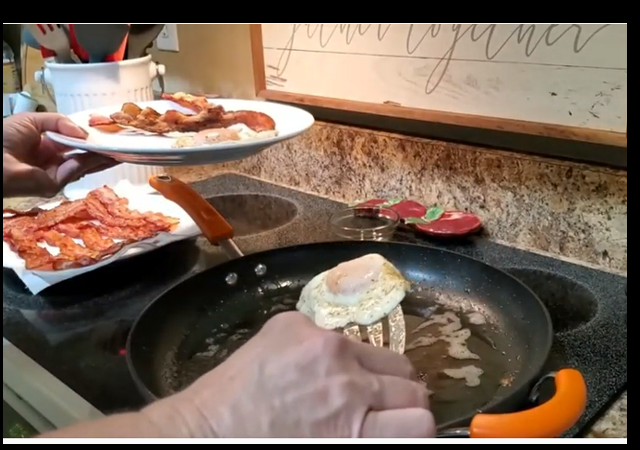 Legal Insurrection readers know I am a big fan of eggs, which are loaded with nutrition vital to health.

As I noted in a previous post, there is a serious avian flu pandemic that is killing off millions of our nation’s poultry supply. Reports are now surfacing about a massive increase in the cost of eggs.

For example, the latest report of the Producer Price Index, which shows how inflation is affecting business owners and producers, indicates the highest jump in the cost of eggs among the items in monitors.

The largest jump in food prices were for “eggs for fresh use,” where costs for businesses to supply their products and package them for everyday shoppers rose 161.3%. It was the only food item with a triple digit increase in price listed in the PPI.

This means that the eggs used by bakers, fry cooks, and even on breakfast menus for fast-food joints are much more expensive compared to April 2021. The price for consumers was up too, with eggs 22.6% more expensive than in April 2021.

The Department of Agriculture’s Food Price Outlook for 2022 also looks grim for those of us who love omelettes and eggs-over-easy.

This situation has not been helped by a massive fire that killed tens of thousands of chickens in Minnesota.

According to Forsman Farms website, the farm started in 1918, and now the fourth-generation family farm sells more than three million eggs a day to some of the nation’s largest retailers.

“Overnight, a fire destroyed one of our barns at our Howard Lake farm. No one was injured and we are grateful that first responders were quickly on scene to put out the fire. Unfortunately, chickens were lost because of the fire. We are evaluating the extent of the damage – which appears to be confined to a single structure – as well as investigating the cause of the fire,” a Forsman Farms spokesperson said.

Additionally, the Russia-Ukraine war has resulted in price rises in fertilizer and other costs associated with egg production. Sweden and the United Kingdom are both reporting that production is being cut and that an egg shortage is possible.

Wheat, a key ingredient in chicken feed, has almost doubled in price because Russia and Ukraine produce about 30% of the global supply.

Farmers are calling for a 40p increase in the cost of a dozen eggs to meet the rising costs.

Speaking of Christmas, it will be interesting to see just how much a turkey will cost by the time we reach the 2022 holiday season. That is, if there is poultry available to buy. Under the Biden administration, you can’t make any assumptions.

The difference between 1929 and today is that in 1929, people who were broke had character, knew common sense, and were devoted to their families. Most of the population was eligible for the military. People working in government were patriotic. Men were men, women were women. People went to work. Pedophiles were killed.

Here in 2022, there Antifa and BLM maniacs working at the behest of the democrat party. People working in government are wholly corrupt, stupid and/or treasonous. Families are broken, few people have common sense, 75 percent of the population is ineligible for the military (meaning: they’re either fat, have criminal records, mutilated with tattoos, nuts, etc.). Pedophiles are in charge of our schools.

Biden will be the last president of the United States as 50 states.

Don’t worry, Brandon has his best LGBTQ+++ and BIPOC specialists working on it. They’ve been working on a cure for white supremacy for over a year.

May they rot in hell

Time for junk yard dogs on every property amd more

In 2020 there were 300 million people facing chronic Starvation.

In 2025 there will be 1.5 Billion people facing chronic Starvation.

Lack of Fertilizer is the 5th Horseman of the Apocalypse.

Make sure that property has a large garden and hidden stores of food.

The Davos crowd is trying to kill us.

How long before some return the favor?

For the many here who clearly don’t know what you are referring to;

And that is just a very superficial overview. Klaus Schwab isn’t just some “college professor” living in astonishing wealth overseeing panel discussions among the elites in government, industry, education and entertainment. He is the grandson of an important WWII Nazi industrialist whose son (Klaus’ father) was also a Nazi enthusiast. Go to the WEF website and explore their founding and mission statements. This is the Fourth Reich being launched and one of their fundamental beliefs is that the world is horribly over-populated.

The video is a good start to introduce anyone to what is going on. The last meeting held a couple of weeks ago began with a statement by Fuhrer Schwab declaring that all in attendance (the royal “we”) are running the world. It’s all there. Ignore at your own peril.

It’s good we made it through Easter first.

It’s a crap time to read this news. Something got into our henhouse last night, ate the head clean off our rooster, and wasted all the girls just for spite. It’s weasel-like behavior but there are no weasels in our region. Don’t even know how it is getting in. Happened to us once before around 2016. Last month, we were smothering in eggs. Not so much now.

Bobcat. Got ‘im on video.
One more thing to worry about.
Probably not an Antifa member, but nothing is certain anymore.

As the article points out, there are reasons other than the general inflation why the price of eggs (and chicken) is high.

And, yes, it’s better to have expensive eggs (price rationing) than not to have eggs at all (government-imposed rationing). Especially if you bake foods at home that require them. Although one would think hoarding would be self-limiting due to the limited shelf-life of fresh eggs.

Nonetheless inflation in the price of many foodstuffs is higher than most (all?) Americans have ever seen it. I keep reading that food inflation is “only” ten percent or so, yet many of the foods I buy have inflated to 150-200% of what they cost a year ago- not rare food specialties, but everyday items such as frozen fish, fresh meats, even canned beans are all far over 10%

Please don’t hoard food. Hoarding ensures there will not be enough to go around.

Don’t be that guy who buys a pallet full of Gold Medal Flour and stores it in the garage next to the SEVEN Dust.

Please don’t buy that extra bag of bread flour, even though it might not be on the shelf next week. I saw this coming a mile away but could not be bothered to plan ahead or make sure my family gets fed. If my family is starving, yours should as well.

Eggs that don’t need to be fresh, such as for hard boiling for breakfast, last for months in the refrigerator. You can buy months ahead if you find a deal.

“self-limiting due to the limited shelf-life of fresh eggs.”
Store-bought eggs, perhaps, because the FDA requires them to be washed.
Home-laid eggs, unwashed, will keep perfectly fine for six months or more, at least in our climate. If it doesn’t stink when you crack it, it’s fine.
You can also freeze eggs if you know what you’re doing.

So strange to read about your chicken woes and now about storing eggs. I was just watching a video yesterday from a homesteader who was water glassing eggs for shelf storage. Can’t be done with store-bought, though. I wish I could keep chickens (sans the bobcats), but not in this residential area. Sigh.

I heard about the water glassing, I may try that.

There are a lot of videos on it, but my favorite is homesteader Becky at Acre Homestead. She’s just delightful, very young and new to homesteading, and super excited about everything she does. Here’s her water glassing vid: https://youtu.be/uRQs_A6SuCI

If I were going to try it, I would watch all the vids on it and read up on it, but I find this stuff fascinating and would love to live on a homestead so I do it vicariously through her and a couple others I like to follow.

My daughter has been experimenting with different ways of preserving eggs, so far, doing well.

free range can last a LOT longer than store bought stuff.
I leave some out (albeit in cool dry place) for a about 10 days before hard boiling.
rest of the 2+ dozen I get each week in fridge usually after day 3 of laying and can last 3 weeks in fridge easy enough if needed.
blood condition (genetic) I need to eat eggs so since friends that have hens give me free eggs may as well eat them.
#OrangeYolksMatter

Eggs are not the only thing that have gone up. I saw today that peanuts have soared in price and Beer nuts are insanely expensive!

Fortunately, deer nuts are still under a buck.

Liberalism is a peculiar institution.

Much of the price increase is because the dollar was devalued. Stop blaming this stuff on the war.

What a stupid comment. The dollar has been strong, idiot.

The dollar is near a 5 year high against the Euro and Yen; and up several percent against where it has traded against the Yuan for most of the last year. While the government management of the economy has been incompetent, by the Administration, Congress and the Fed, it is all relative. The USA still appears to be the “best house in a bad neighborhood”.

It’s all about relative interest rates, at least for the convertible currencies. The markets are expecting the Fed to raise rates faster than the EU, and Japan has made clear that it won’t raise rates, so the yen is getting clobbered.

Wait till you gas up for the 4th of July weekend.

For those who don’t remember the gas crisis of the 70s there was a hugely popular vehicle accessory back then – the lockable fuel tank cap.

Get yours now before the rush.

My vehicles today have been coming with insane, flimsy plastic add-on gadgets that must be used to insert fuel using anything other than a strictly engineered fuel-pump nozzle, and even the nozzles have been a bitch to get in. Using the add-on attachment with a jerrycan, you can get your fuel spillage down to under 20%. I think if Detroit could build hymens into them, they would. THey’re so hard to get fuel into, I’m hoping they’re practically impossible to get fuel out of.

Try slipping a length of half inch surgical tubing into the tank. If you can do it so can they.

At my grocery store the cost of buying 18 eggs has nearly doubled. I never thought about the price of eggs until now.

Just last summer, Safeway was offering them for 25-50¢/dozen on sale.