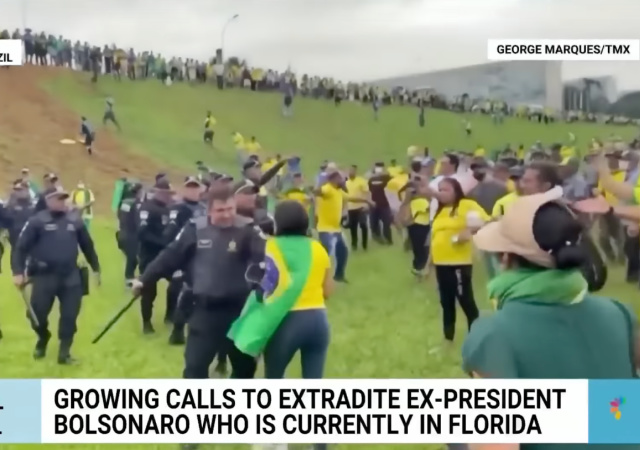 White House national security adviser Jake Sullivan said the administration had not received a request from Brazil to extradite Bolsonaro:

“We’re not, as far as I know, in direct contact with Bolsonaro, so I can’t speak definitively about his whereabouts,” White House national security adviser Jake Sullivan told reporters Monday of the former leader, who is in Florida after spending New Year’s Eve with former President Donald Trump. “We have not, as of now, received any official requests from the Brazilian government related to Bolsonaro,” Sullivan added.

Visa issues are governed “by legal modalities,” according to Sullivan, deferring to the State Department. But if the U.S. were to receive a request, it would be treated “seriously,” he said. In the meantime, there are no plans for President Joe Biden to speak with Brazilian President Luiz Inacio Lula da Silva.

Bolsonaro blamed his defeat on “a software bug.” He left Brazil for Florida during his last days in office and before President Luiz Inacio Lula da Silva took office.

President Joe Biden condemned the riots but hasn’t said anything about Bolsonaro in Florida.

Nearly 2 years to the day the US Capitol was attacked by fascists, we see fascist movements abroad attempt to do the same in Brazil.

We must stand in solidarity with @LulaOficial’s democratically elected government. 🇧🇷

The US must cease granting refuge to Bolsonaro in Florida. https://t.co/rzsZl9jwZY

Two years ago our Capitol was attacked by fanatics, now we are watching it happen in Brazil.

Solidarity with Lula and the Brazilian people.

Democracies around the world must stand united to condemn this attack on democracy.

Bolsonaro should not be given refuge in Florida.

I stand with @LulaOficial and Brazil’s democratically elected government. Domestic terrorists and fascists cannot be allowed to use Trump’s playbook to undermine democracy.

Bolsonaro must not be given refuge in Florida, where he’s been hiding from accountability for his crimes. https://t.co/ywOCTMgRxM

I condemn the assault on democracy and on the peaceful transfer of power in Brazil. Brazil’s democratic institutions have our full support and the will of the Brazilian people must not be undermined. I look forward to continuing to work with @LulaOficial.

The Brazilian Army is attempting to keep the two sides apart. Sending Bolsonaro to Brazil to be at Lula’s mercy is a very bad idea unless you want a hot war. Let things settle.

Democrats would suddenly discover an immigrant they don’t want here.

The real third-world tyrants in America expose themselves.

The Dems inner Stalin oozes out. No one is allowed to contest a Leftist/Communist “victory”.

He can always re-enter across the Mexican border.

I was about to type the same thing!

They many have
Got to
Him..like Abe

I wish north korea would demand extradition of obama when repubs are in office.

They’re a bunch of wannabe authoritarians who will soon be stripped of their assigned committees.

we have no extradition treaty with Brazil.