“an investigation of the 574 violent riots in 2020 that included looting, property damage, injuries to 2000 police officers, and to determine if participants communicated across state lines” 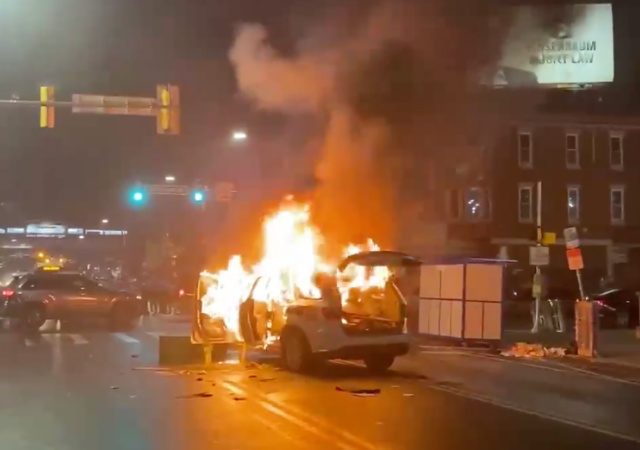 The National Police Association wants Republicans to investigate the BLM/Antifa riots of 2020 if they retake control of Congress. It’s an excellent idea and would be good for the country.

People who participated on January 6th have been punished extremely harshly while the left has skated after riots that went on for months and caused billions in damage and multiple deaths.

.@GOPLeader Renewing our request, based on our @Rasmussen_Poll for an investigation of the 574 violent riots in 2020 that included looting, property damage, injuries to 2000 police officers, and to determine if participants communicated across state lines. https://t.co/aDQjyKh5qS pic.twitter.com/JxLiQPbEpL

Republican leaders should listen to this:

Most Voters Want Congress to Investigate the 574 Violent Riots in 2020 that resulted in over 2,000 injured police officers as well as the January 6th riot at the US Capitol

A new national telephone and online survey taken by Rasmussen Reports, sponsored by the National Police Association, finds that 66% of Likely U.S. Voters think Congress should investigate the violent riots that engulfed the United States in 2020. Twenty one percent (21%) say no. Thirteen (13%) are not sure.

Additionally, the poll found a majority of likely voters believe:

It’ll be fun to watch Biden, and other Democrats denounce this after spending two years talking about threats to our democracy.

Sen. Marco Rubio, R-Fla., is up for reelection this cycle and is calling for an investigation into the protests of the summer of 2020.

He says if Republicans win control of Congress, they will work to launch investigations into the protests the nation saw in the summer of 2020 following the fatal police shooting of Breonna Taylor and the murder of George Floyd.

Members of the GOP are comparing this to the Jan. 6 House committee’s investigation into the Capitol riots. The National Desk’s Fact Check Team is exploring what’s behind Rubio’s calls and what it could mean for protestors.

Rubio says there has been no accountability for who was behind them and “how much political rhetoric lent itself to it.”

Democrats set a precedent for this with the January 6th Committee.

You know what they say about payback.

I wish them good luck getting past the Democrats, maybe in January they have a chance.

If Kevin McCarthy becomes Speaker (or Squeaker), forget it.

If he does become Speaker, it will be the signal that the Republicans aren’t serious, that it’s “business as usual”, and that the voters will strip the GOP of their control of the House in 2024.

Jordan (or anyone with a spine) for Speaker!

Fully investigating the riots, while worthwhile, would be a time consuming process. If they’re committing to this I hope whoever is on this committee is prepared to spend most of this term, and likely the next sifting through the data.

The FBI *should* be investigating these crimes with a lot of vigor because the rioters focused on law enforcement and governmental organizations across multi-state areas. They *should* have confidential informants inside these criminal nests that *should* be intercepting communications between violent conspirators in multiple states and building legal cases to put them away in federal prison for years. Their financial links *should* be scrutinized to track back to their funders, and a proper RICO case *should* result.

But no. There’s a bunch of trespassers in DC who deserve hundreds of agents and tens of thousands of man-hours devoted to putting them in prison instead.

I suspect a number of ‘right-wing’ media reporters and book-writers have a much better idea of who is behind the BLM/Antifa/anarchists and their tactics that practically any agent in the FBI.

I rather expect that it was the FBI providing the means of communication and the finances.

This x 1000. The only reason BLM and Klantifa operate with impunity is because they have tacit approval of the DoJ and the thugs at the FBI.

Revenge would be sweet, but let’s get the individuals we know are responsible by their negligent complicity out of the positions of public trust if still in them, Public shaming and ridicule may have to suffice. There are too many achievable legislative and executive demands and too little time, just a fact of life. I’d prefer frog marching, tar and feathers, and a return of the public stock.

It’s not like they actually do anything useful there anyhow. Most of them don’t even read anything before voting on it. At least this would have SOME value as opposed to most of what we overpay them for.

And do you blame them? democrats routinely author one, two, three, four thousand page legislative bills. All the better to hide the pork barrel spending. Until that practice ends who realistically has a chance to read a complete bill and fully understand its ramifications.

I for one think there should be a permanent standing rule/order whereby the full House must attend a complete reading from beginning to end of every bill that comes up for final vote. No exceptions. Everyone must attend. Nobody is allowed to leave the room until the reading is complete. Perhaps that would end the practice of authoring these massive legislative bills that nobody has time to read or comprehend. But I doubt it.

Not the members’ time, though. Staffers.

Might need to expand the committee staff. And perhaps try to find people to staff it who aren’t part of the political establishment.

Investigate and impeach congressmen that supported it. Or eject them. Whatever the Constitution provides.

The 21% saying “no” are probably the rioters.

The only question is how to deal with Democrats. If it is the Jan 6th style the investigation loses all credibility if it isn’t then the Democrats will do everything in their power to undermine from within.

Complete transparency. The communists have no defense against that.

Thank you, Danny. You’ve perfectly demonstrated the cuckish indecision of the GOPe for the last 30 years. I’m sure Mitch and the gals will come through this time.

It’s wrong to compare any (possibly) legitimate hearings to the January 6 dog and pony show.

Investigations are racist! or something pathetic like that as squealed from the screeching lefties.

Also, I’m not at all enthused by this. It sounds like the perfect political theater opportunity for the gop to get nothing done while giving the appearance of doing something. They need to pass good common sense bills and force Biden into full exposure by making him veto bills with widespread support.

The only way I’d be in support is if they used this to deplatform Soros et al. because that would be the only meaningful accomplishment to be made from this.

The GOP would have to grow some balls which McCarthy and Bitch McConnell have amply demonstrated they don’t have.

“and to determine if participants communicated across state lines”
You could determine that they all had suitcase nukes, and the FBI still isn’t going to give you a tumble.

I’m going to have to disagree with that 66%. We don’t need another politicized Congressional investigation. We know damned well what happened, who incited it, who sponsored it, who covered for it in the press. For the good of the republic, we need to stop using such platforms for political reprisals. That’s what voting is for, and I hope that, in the coming week, those responsible get properly humbled for what they’ve done.

I saw a chat board post where a guy congratulated antifa and the FBI for their successful false-flag operation on Jan 6 a few days later. This ish is what we’re up against. Radical revolutionaries openly operating with impunity while decent folks get years in the slammer.

IMO time would be much better spent on an investigation of the Covid Respose.

Focus on collaboration with media,.academia and tech to suppress dissent. Figure out who knew what and when then make them explain why they misrepresented the data. Root out and expose every bad actor in the Fed Govt.

Then set limits on emergency. powers and reinforce that the Constitution doesn’t go away just because a bureaucrat says boo.

Hell, set limits on emergency powers *first*. Also, introduce legislation to put some teeth into the constitutional retirement that the federal government guarantee to each state a republican form of government.

With a DHS, an FBI, a fully-baked surveillance state, and the rest, these aren’t questions.

Congress should force out the answers, and investigate why we have to ask.