Prime Minister Ulf Kristersson appears unmoved by the anger of eco-activists. Meanwhile, Germany dismantles a windfarm to make room for a coal mine. 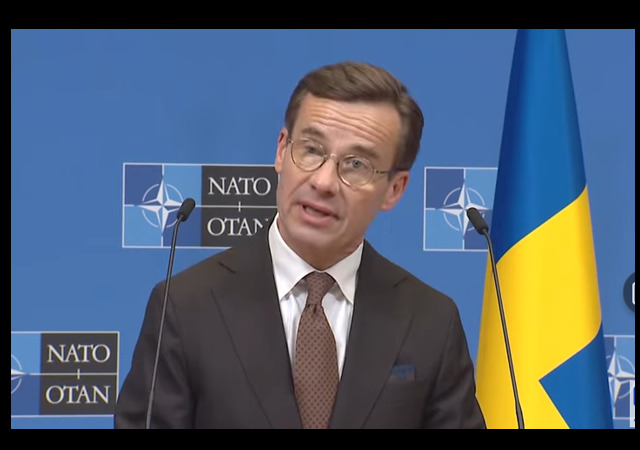 That right-center government has been busy, too. It rejected the inanity of “zero-emissions” restrictions, pushed for the construction of nuclear power plants, and ended the restructured bureaucracy, so there is no longer a stand-alone Ministry of Environment.

This week, the coalition agreed a positive stance towards nuclear energy and indicated its intention to construct new power station reactors, reported Euronews, while Bloomberg reported that the nationalist Sweden Democrats do not support the country’s goal of net-zero emissions by 2045.

On Tuesday, new Prime Minister Ulf Kristersson, leader of the Moderate party, named his Cabinet and appointed Christian Democrat leader Ebba Busch as the new Minister for Energy, Business and Industry, and Liberal politician Romina Pourmokhtari as the Minister of Climate and Environment, with Pourmokhtari working under Busch rather than leading her own ministry.

Leader of Sweden’s Green Party Per Bolund said the country would have no dedicated environment ministry for the first time in 35 years, Euronews reported.

Interestingly, Sweden’s Environmental Protection Agency was one of the first in the world after being established in 1967. The environmental bureaucrats that have grown powerful and well-funded in the intervening years are unhappy with the move. Green justice activist politicians are also upset.

Pär Holmgren, a Swedish Green Party MEP, said, “expect huge cuts in green funding leading to a devastating impact on climate policies that we, the Greens, worked so hard to put in place.”

Isabella Lövin, chairperson of the board at the Stockholm Environmental Institute and herself a former minister of environment, said that green issues in Sweden had been “set back 35 years”.

It’s not the first time that environmental issues in Sweden have been handled by other ministries.

Before the first dedicated environment ministry was established in 1987, the Ministry of Agriculture and then the combined Ministry of Environment and Energy dealt with those policy matters.

I suspect the new Swedish government is not too concerned with the complaints of the eco-activists.

I may have found my newest crush. https://t.co/r06R0goioX

As if this isn’t already enough good news for the Swedish people and those who like civilization, there is more. The climate cultists of Extinction Rebellion are furious.

Two countries in Europe have now scrapped key eco departments in recent years. The UK in 2019 and its climate change department and Sweden its environment ministry last week. This is not normal political to-and-fro. It signals the defining conflict of 21st century politics. 🧵

Wait until Extinction Rebellion finds out what is happening in Germany!

A wind farm is being dismantled in western Germany to make way for an expansion of an open-pit lignite coal mine in a “paradoxical” situation highlighting the current prioritization of energy security over clean energy in Europe’s biggest economy.

The dismantling of at least one wind turbine at the wind farm close to the German coal mine Garzweiler, operated by energy giant RWE, has already started. RWE says that lignite, or brown coal, has been mined from the Garzweiler coalfields for over 100 years.

RWE also said at the end of September that three of its lignite-fired coal units that were previously on standby would return to the electricity market on schedule in October.

“The three lignite units each have a capacity of 300 megawatts (MW). With their deployment, they contribute to strengthening the security of supply in Germany during the energy crisis and to saving natural gas in electricity generation,” RWE said last month.

These are indeed hopeful signs that the era of destructive, bureaucratic eco-activism is nearing its end.

Something tells me we won’t see any climate warriors gluing themselves to the blades of wind turbines. Common sense prevails when it comes to self preservation. Destroying artwork is much more “productive”!

That made me snort-laugh. What a lovely image that would be!

Maybe they will glue themselves to ABBA

I’d actually enjoy seeing that wind turbine being fired up.

If not gluing themselves, how about being glued?

“The climate cultists of Extinction Rebellion are furious”
Maybe they will glue themselves to a candle factory.

Or a fireworks factory.

So the world is finally going from “woke” to “waking up” in the face of the contrived climate hysteria.

I think the coal still in the ground in Germany is more productive than the wind farm in the way.

Fuck around and find out is a good policy.

Hope it doesn’t impact the supply of Sweedish fish.

The left is always banging on about how we need to be more like Sweden, right? So now here’s an example from Sweden for us actually to follow!

If the Swedish Chef from The Muppet Show were here, he would say “Der nerf de berda voorf vun du herfshnerder ein luftfahana” which is an old Swedish proverb about a fish that stinks when consumed, much to the disdain to the consumer.

It is amazing how the prospect of freezing to death and a bad economy focuses the mind on the need for a little Global Warming.

It’s quite enlightening as to how the cultists see the light when their heat and light is turned off. Climate stuff is great when your sipping a latte but not so much when you don a coat and mittens to huddle over a game Yahtzee

Sweden was also notably the nation that said no to the covid insanity.