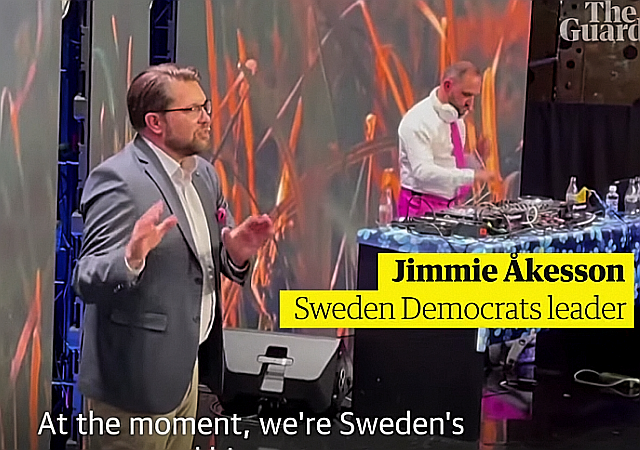 “Prime Minister Magdalena Andersson will officially resign from her post on Thursday, after she accepted defeat in a close-fought election, handing victory to the four-party right-wing opposition bloc, and giving them the first go at forming a new government,” the French TV channel Euro News reported.

Prime Minister Andersson acknowledged that the right-wing opposition has managed to win a majority in a narrowly contested election. The right-wing bloc had a “narrow majority, but a majority nonetheless,” she noted Thursday.

This is the first time in Sweden Democrats’ 34-year history that they will be part of a government.

The news agency Reuters summed up the party’s agenda:

The Sweden Democrats aim to make Sweden the European Union’s toughest on immigration policy including legislation making it possible to deny people seeking asylum based on religious or LGBTQ grounds.

The party wants to slash economic benefits for immigrants and give more powers to police, including zones in troubled areas allowing searches without concrete suspicion of a crime.

The right-wing party’s rise to power has shocked Europe’s political and media establishment. “In Sweden, a bastion of tolerance, a nationalist and anti-immigrant party is on the cusp of joining a right-wing coalition in government,” Germany’s government-run Deutsche Welle commented.

Others worried Sweden could abandon the European woke project and turn to its national and cultural roots. Left-wing British newspaper The Guardian lamented that the new government might usher in “a period where Swedishness and loyalty to Swedish values defined from above would be of central importance and would permeate school and university courses, libraries, culture, and the civil service.”

The New York Times and The Washington Post were equally dismayed. The NTY pondered how “anti-immigration Sweden Democrats beat out more moderate right-wing parties in a country famed for liberal governance.” The right-wing victory “promises to upend … country’s reputation as a haven for progressive, pluralistic ideals,” the WaP0 wrote.

The anti-immigration Sweden Democrats beat out more moderate right-wing parties in a country famed for liberal governance. It is the latest example of the right’s staying power across Europe.

Germany’s Alternative für Deutschland (AfD) party was among the first to congratulate its “sister party,” the Sweden Democrats. The election result is a “turning point for the Scandinavian country,” the AfD declared. “Excessive crime and unchecked migration have made the Swedes reconsider that the Social Democrats, who have been in power for a long time, no longer make politics in the interest of ordinary Swedes,” the German opposition party added.

I wish we had a Right Wing led coalition.

We would, if the Libertarians weren’t primarily engaged in throwing a monkey wrench into the machinery.

I would like to be hopeful about this, but history has taught me that “right wing” in the context of the EU usually means “slightly to the right of Bernie Sanders”.

Sweden’s leftists rejected Bernie Sanders socialism as too far left and told him that he’s an idiot. (the second is a Swedish political scientist)

Sweden does have more social safety net structure than we do, but they are not woke and they are not into a bunch of giveaways the way you might think (unless you count free healthcare in the same vein as universal basic income).

Americans are smart enough about it too, which is why he can’t win a Dem primary, even in a party of grifters.

If they’re smart they’ll follow through with that immigration policy and really crack down on their “migrants.”

You guys had better hurry.

It’s a big year for Sweden: join NATO and crack down on illegal aliens.

Is it just me, or does anyone else think that the guy in the pink pants & tie and the white headphones looks like a DJ?

In a gay strip club, yes he does

Given that he is running.an audio board, it is entirely possible he IS a DJ at other times.

1) Remember that it is a 4 party coalition. Getting a coherent set of policies and holding it together is going to be more than passing difficult. If they do not hold together, the coalition can collapse and there will be new elections.

2) As you can see from the European press coverage, it is a good assumption that the EU and Leftist parties across Europe will try to bring the Swedish government down.

3) Nevertheless, it is the first electoral crack in the Leftist rule in Sweden.

Something tells me Swedish right wing is kind of left wing. Oh, I know what it is.

I’ve been there. Kind of.

I spent summers in the Santa Cruz mountains I wouldn’t trade for anything..

Right-wing as in libertarian in the American sphere of reference? The conventional left-right orientation is an archaic residual reference and does not reflect an actual governing spectrum.

It had a heart transplant. Which wasn’t exactly the point.

Guess Swedes have finally had enough of their women being raped and cities turned into ghettos by the Muslims and the people that let them in.
Good for them

Make immigrants subsist on a diet of Surströmming.

A few years ago Vijeta(?) posted a two-part youtube documentary video about the Swedish Social Democratic Party 1930 through to about the 1950’s detailing its links to forced-eugenics programs in Sweden and abroad. I can’t find the video via LI search or guessing at names and scrolling the results. Anyone here remember what I’m talking about?

Literally. Planned parenthood. Is that not straight up declaring your enthusiasm for eugenics?

“In Sweden, a bastion of tolerance…”
Bastions of tolerance are not all that rare.
A vulture’s gut is one. A septic tank is another.

Good for Sweden. They are now leading the way in Europe.