Pennsylvania? It Could be Nevada That Flips the Senate and Give Republicans Control

Pennsylvania? It Could be Nevada That Flips the Senate and Give Republicans Control

The gubernatorial race is also dead even. Maybe Nevada will soon go all red. 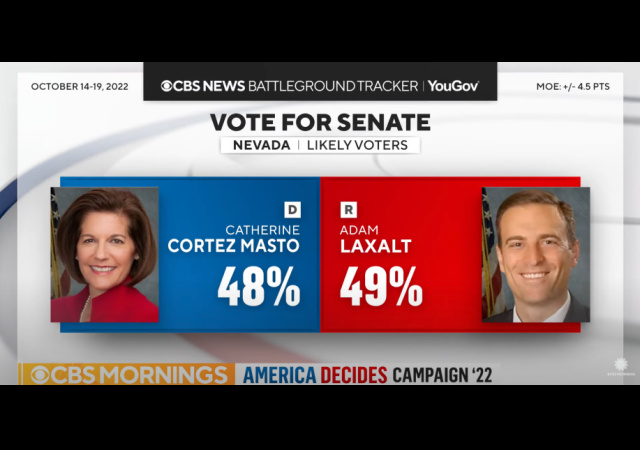 The hot topic is John Fetterman and Dr. Mehmet Oz in Pennsylvania. That is the race that could flip the Senate!

How about Nevada? The Democrats are panicking, so they President Barack Obama will campaign for incumbent Democrat Sen. Catherine Cortez Masto in November.

Obama will be visiting the state on Nov. 1 in Las Vegas and will be joined by Cortez Masto and Democratic Gov. Steve Sisolak, as well as other statewide Democrat elected officials.

“President Obama will join Senator Cortez Masto, Governor Sisolak, and the Democratic ticket to energize supporters and encourage Nevadans to take advantage of the final days of early voting ahead of the midterm election,” a press release announcing Obama’s visit states.

President Obama knows how important this election is for our families – it's time for all of us to step up, volunteer and get out the vote this November.

Looking forward to welcoming you back to Nevada, @BarackObama!https://t.co/2x6urhoM8H

Cook Political Report has had the race as a toss-up since November 2021.

The Democrats continue to be obsessed with social issues, especially abortion. But Nevada, a state that relies on tourism, took a hard hit during the COVID pandemic:

In a state where the tourism industry was rocked by the COVID pandemic, most voters say their finances were impacted by the pandemic and the measures taken to fight it. Three in four report higher prices now being difficult, including four in 10 who say it’s been a hardship, slightly higher than the percentage for voters nationally. Added to this, Nevada has among the highest gas prices in the country, and most say that it’s impacting their families, including half who say the hike in the price of gas is having a “a lot” of impact.

Republicans have led on the issue of the economy and inflation in other Senate battleground contests, and we see that here: Laxalt has an advantage over Cortez Masto on voters who prioritize those issues, which are the top concerns in the state.

Again. People care the most about their paychecks, jobs, security, and providing for their families. Just because the feminists make the most noise with their squeaky voices doesn’t mean everyone is obsessed with abortion. 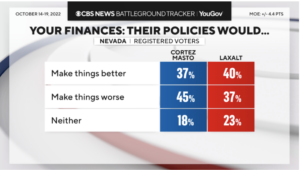 By the way, the Nevada gubernatorial race is just as close as the senate race:

The race is currently dead even, with incumbent Democrat Steve Sisolak and Republican challenger Joe Lombardo each at 48% in vote preference.

Steve Sisolak receives a net positive, if not particularly strong, approval rating for the job he’s doing as governor. And most Nevada voters generally like how he handles himself personally, especially when compared to Lombardo.

Voters think Sisolak will support policies that will protect abortion access, but Lombardo, who is the Clark County sheriff, has an advantage on the issue of crime. More voters think he would keep them safe from crime than say that about Sisolak.

0bama is like a dog turd stuck on the shoe of America. No matter how much we scrape, we just can’t get rid of the stench.

Look on the bright side: Obama had the shortest electoral coat-tails of any president I can recall. He’s almost as flawless a contrary indicator as George W. Bush was. If he’s out campaigning for Democrats, that’s a very good sign.

As long as we get control so we can slow this insanity. I figured the internals have bene telling the left they are boned, that’s why the sudden push for power.

No, biden didn’t. The cheating was widespread and included Nevada, probably occurring in 2016 as well.

OK, it is within the margin of Democrat fraud. That is good. But is it good enough? Will the Republicans/Independents in Nevada fight for an honest vote count? And if the Republicans won’t, what good are they with their tactic of pre-emptive surrender.

Well, he won’t be owing McConnell any favors if he does win.

It doesn’t matter if we take the House. The fix is already in:

It might not be worth the trouble, especially if Joe doesn’t get the message to step aside.

“Nevada is a blue state, even though the presidential elections have been close.”

Nevada is yet one more example of a state full of conservatives bullied by a single big, blue city. The illegals in the “Service Workers Union” vote reliably and and never challenged.

Interesting. It seems to me if Democrats really are worried about a toss up race in NV then it’s likely they have conceded that 1) every GOP incumbent is likely to win (i e. Johnson in WI is safe, MO, OK, AL will stay GOP) 2) they are going to lose 3 of these 4 – Vance v Ryan in OH, Fetterman v Oz in PA, Budd v Beasley in NC, and Walker v Warnock in GA, finally 3) they have to hold NV to stay even if the GOP goes 4 for 4 or they lose Masters v Kelly in AZ.

Absent cheating, I’d bet R’s take the senate 53-47 or slightly better.
People that normally pay little to no attention and vote for D’s just because, are now aware that there check doesn’t go nearly as far as it did just a couple years ago. They will vote their pocketbook.

Pennsylvania doesn’t flip the Senate because the current Pennsylvania senator is a Republican. Oz would hold the seat.

Ole Harry Reid, not one year gone, and Nevadan’s are finally figuring out they have a voice that hasn’t been bribed, bought and paid for by Reid’s own version of the Mafia.

The Repubs will add at least 3 senate seats (NV, GA, AZ), and have reasonably good chances in NH and CO. Outside chance in CT. If they knock off Murray in WA State, I’ll stand and cheer because it’s where I live, but I’ll be truly shocked.

Saw an interesting article today that’s genuinely worth reading even though it’s on Politico, which is usually horseshit. Apparently, Stanley Greenberg, the Dem pollster, has pushed back hard at insider Dems who want Senile Joe to tout his accomplishments. (Whatever they imagine them to be.)

“That’s the warning being issued by one of the party’s most seasoned pollsters, STAN GREENBERG. In memos, private communications and interviews, Greenberg has been imploring the party to — let’s put this bluntly — shut the hell up about all the work it’s done. It’s not that voters don’t care. He says voters actively turn against Democrats when they hear it.

“ ‘It’s our worst performing message,’ Greenberg told West Wing Playbook. ‘I’ve tested it. I did Biden’s exact words, his exact speech. And that’s the test where we lost all of our leads… It said to the voters that this election is about my accomplishments as a leader and not about the challenges you’re experiencing.’ ”

Something else to say.

The whole pollster accuracy thing traces back to 538.com in large part. Even if you dispute that, keep reading. 538 bases its accuracy ratings on a pollster’s numbers in the 3 weeks before the election. The threshold was passed on October 18, and even before then we saw various polls getting real to protect their reputations, such as they are.

This adjustment process is ongoing, and the generic number in the Real Clear Politics average has gone from R+0.6 about a week ago to R+3.1 now. But it gets better, because if you look at the details you’ll see that a bunch of D-leaner polls (as documented by 538) have going to R predictions.

When I look at the polls, I pay the closest attention to established pollsters who report numbers against type, and we’re seeing a boatload of that happening right now. Also, in the last 2 or 3 days, RCP has increased its R flips from 2 senate seats and governorships to 3 of each.

This will be a strong year for Republicans, and maybe much stronger than any of us want to dare believe.