Get a mirror, dude. 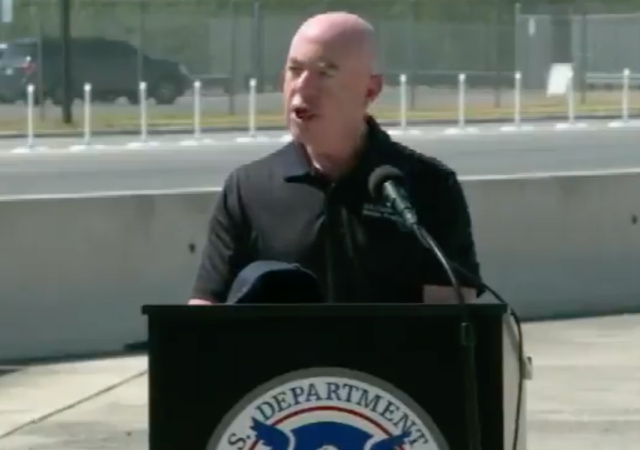 It is rare for any politician of any party to accept responsibility. “The buck stops here” no longer exists.

Department of Homeland Security Alejandro Mayorkas is the latest example.

We found out that Mayorkas knew the claims of border agents whipping Haitian migrants were untrue hours before he called the photos “horrifying” at a White House press conference.

Our border is a mess, thanks to Biden. Republicans have called for Mayorkas to resign or be impeached.

Mayorkas swiped at Republicans during a call with The Dallas Morning News. Their rhetoric is causing problems at the border, not the Biden administration:

“I’ve got a lot of work to do, and I intend to continue to do it. That’s my response,” he said, during a meeting with The Dallas Morning News editorial board.

He added that “the political cry that the border is open” — a common refrain from GOP critics — “is music to the smugglers’ ears, because they take that political rhetoric and they market it” to desperate migrants from Venezuela and other countries.

The border is open. There is a reason why migrants have told Biden repeatedly to “honor” his promise about an open border. This is from a Honduran caravan in January 2021:

“We recognize the importance of the incoming Government of the United States having shown a strong commitment to migrants and asylum seekers, which presents an opportunity for the governments of Mexico and Central America to develop policies and a migration management that respect and promote the human rights of the population in mobility,” the statement said. ” We will advocate that the Biden government honors its commitments.”

The border patrol has “encountered” at least two million migrants in the past 11 months, a new record.

The agents have encountered 267,000 migrant children at the border since Biden became president in January 2021.

In March 2021, Mayorkas said the Biden administration would not turn away unaccompanied minors at the border sent by their “loving parents.”

The border patrol also observed around 599,000 “gotaways” in the past year. The border patrol classifies a gotaway as someone “observed on cameras or detected via sensors, footprints or other means but were never apprehended because of a lack of manpower.”

Press Secretary Karine Jean-Pierre claimed no one just walks across the border. The evidence says otherwise. It seems like Fox News’s Bill Melugin posts a video every day of people literally walking across the border.

Republican Sens. Ted Cruz and Lindsey Graham told Mayorkas that Congress should impeach him in a five-page letter:

Your failure to faithfully enforce this nation’s immigration laws and willful blindness to the veryreal humanitarian crisis at our southern border amounts to a gross dereliction of duty and aviolation of your oath of office. Historically high levels of illegal immigration and illicit drugtrafficking demonstrate that our southern border is open for every kind of public health andnational security threat imaginable. Despite the heroic efforts by the men and women of BorderPatrol, who operate with very little support from Washington, D.C., you have failed to achieveany semblance of operational control of the southern border. We have grave concerns about whatthis failure means for both national security and the health and safety of American citizens.These failures cannot go unaddressed, and your actions cannot be unaccounted for. TheAmerican people deserve better.

Cruz and Graham detailed all the failures of the Biden administration along with the ignorance officials show almost daily.

The senators mentioned the issues I mentioned above but also expanded on drug smuggling. We’ve seen massive amounts of fentanyl coming across the border. Leslie wrote about cartels smuggling opioids ten times stronger than fentanyl into the country.

This is gross dereliction of duty and, if not corrected swiftly, could provide grounds for impeachment. We fully expect that in a few months’ time a Republican-led Congress will hold you to account for your willful negligence regarding the security of the southern border and the safety of the American people. We ask that you provide a full accounting of what DHS will do to achieve operational control of the southern border, as it is required to do by law, and stop the flow of illegal aliens and illicit drugs into the United States. Lives are depending on it.

Who’s in charge? This has to be the dumbest attempt yet at shifting blame.

Mayorkas wants everyone to shut up about the lack of border enforcement and then when we stop talking about it he believes the problem will somehow solve itself.

How about no? Do your damn job Sec Mayorkas. People in positions of public trust who set and enforce policy for their Agencies are fair game for public criticism.

He is doing his job. He’s taking his orders from the top.

Well if you mean Biden then sure, not to be trite but in our system the people are on top and in Nov that point is going to ring true on election day. Whether the representatives we elect will do theirs is the better question come January and the seating of the next Congress.

He’s doing exactly what the pedophile-in-chief told him to.

Dems became the party of dumb a long time ago, they openly embrace deplorables, every other word or so is a lie. More people are figuring this out every day.

This is why we used to tar-and-feather politicians. There needs to be some repercussions for bald-faced lying like this.

I’m so old, I remember when the lies politicians told were at best undetectable, and at worse credible. Now they tell you they were born on Krypton and can fly off skyscrapers, and if you don’t believe that, you’re a terrorist. Gormless, artless fuckwits.

So 4+ million since Biden came into office just dropped from the sky? IMO this is what happens when you have a corrupt MSM that allows you to get away with saying that Black is White.

He’s saying the problem isn’t the actual open border, it’s anyone who criticizes the open border mismanagement But what I’m hearing is “please impeach me, I’m an incompetent hack”

Most media has been lying for so long that they no longer would know truth if they tripped over it.

Nah, we only give them plane rides after they cross the border.

Um… nope. Now we’ve escalated to giving them plane rides to and over our border.

This man has never seemed mentally squared away.

The resemblance to Lex Luthor is not lost on many of us.

By that logic NOAA is responsible for hurricanes because they locate and track them.

Will somebody please shoot me?

I am SO SiCK of this gaslighting.

These bastards should have been impeached.

If the gop doesn’t impeach these obvious oath-violators, then WTH is the gop for?!

According to the Border Patrol they encounter 189,000 per month, compared to an average of just under 51,000 per month during the Trump presidency. That does not include ‘got-aways’ which have also sky-rocketed.

To put that in perspective, Biden has let more illegals in in two years than Trump in four.

Vile Dumb-o-crat: “It’s not our manifestly ill-conceived, stupid and destructive border laxity/non-enforcement/red carpet invitation to illegal aliens that are the problem — the problem is the conservative Americans who complain about and criticize those policies.”

That said, emigration reform to mitigate progress and collateral damage at both ends of the bridge and throughout. #HateLovesAbortion

Do you believe your eyes or the regime gaslighting? I think the answer is clear.

Since when did Ravenous Bugblatter Beasts of Traal become eligible for Federal offices?

I mean, yay, alien labor on the cheap and all, but that seems to be going a bit far.