The majority of people come from Cuba, Nicaragua, and Venezuela. This is not a Mexico problem, it’s a Democrat problem of encouraging mass illegal migration from across the globe. 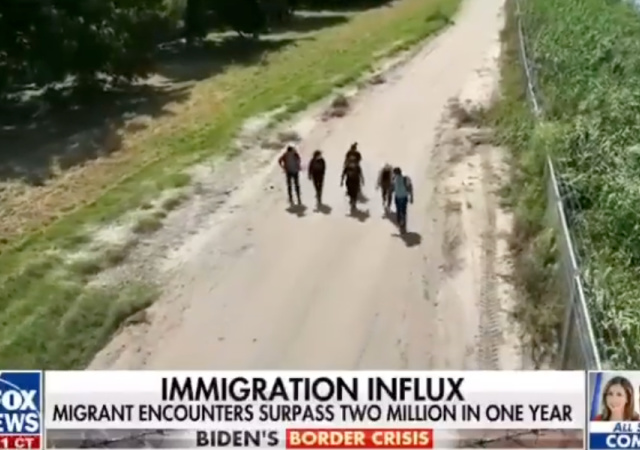 President Joe Biden’s administration has weakened our border security so much I honestly do not know how we can ever fix it.

For the first time ever, U.S. Customs and Border Protection agents “encountered” over 2,000,000 at the southern border in a fiscal year: “CBP Nationwide Total Encounters for FY22TD through August stand at 2,493,723, for the Southwest Border alone that number stands at 2,150,244.”

We still have one more month to go, too.

This does not count the gotaways. It counts the 203,598 encounters with the border patrol in August.

.@BillFOXLA on illegal immigration: "2.1 million in a single fiscal year is both a remarkable and historical number, but what it does not account for is the more than 500,000 known gotaways…" pic.twitter.com/WXzh8PFWDS

The people aren’t just from Mexico. The August stats from CPB confirms another blog I wrote about people from countries such as Cuba, Nicaragua, and Venezuela using our lax border security to enter our country.

“Failing communist regimes in Venezuela, Nicaragua, and Cuba are driving a new wave of migration across the Western Hemisphere, including the recent increase in encounters at the southwest U.S. border,” stated CBP Commissioner Chris Magnus. “Our dedicated teams of skilled agents continue to work around the clock to secure our border and safely and humanely process and vet every individual encountered, but those fleeing repressive regimes pose significant challenges for processing and removal.

Magnus had to say something nice about the Biden administration: “At the same time, the number of migrants entering from Mexico and northern Central America has decreased for the third consecutive month, as the Biden-Harris Administration works with our partners in the region to address the root causes of migration, facilitate repatriation, and take thousands of smugglers off the streets. More individuals encountered at the border without a legal basis to remain will be expelled or removed this year than any prior year.”

Bill Melugin consistently tweets videos and stats of people he witnesses crossing the border without any problems.

Happy Sunday from Eagle Pass, TX! This is a group of approx 150 that crossed illegally and then gathered along a local highway. A large majority of the migrants who cross in this Del Rio sector are released into the U.S. after processing. Some then accept TX buses to D.C. & NYC. pic.twitter.com/wm5PkhTzzH

BREAKING: We just saw a young boy nearly drown while trying to cross the Rio Grande into Eagle Pass, TX. A group tried swimming across, the boy in the blue shirt struggled & went under, began thrashing. Bystander in white shirt on MX side jumped in & saved his life. @FoxNews pic.twitter.com/jQkBtabUD5

More video from our brand new @FoxNews night flying drone with thermal imaging from early this morning. Within just 2 hours in Eagle Pass, TX this AM, we saw 3 large groups totaling 500+ crossing illegally in three spots.
450,000+ illegal crossings in this sector so far this year pic.twitter.com/wkKeTcOBGB

NEW: Several hundred migrants are beginning to gather under a bridge in El Paso, TX after they crossed illegally. Local NGOs & CBP facilities are overwhelmed as crossings surge there, & CBP confirms to us they are having to release migrants near El Paso shelters & bus stations. pic.twitter.com/Yhl8Mg5q1s

Relax, its all part of the replacement strategy and going according to plan

At least that’s their story, and they’re sticking to it in public.

The pedophile-in-chief seems to be really good at setting records no sane person would want to own.

But MV says 50 is too many and got their Gov to exile them out of their community and send them to a military facility. Never going to live that hypocrisy down MV and you may have shown the way forward for other communities.

It’s not obvious there is a fundamental plan at play here. It feels more like a purposeful political issue created to leverage the “America is racist” trope without much thought for the illegal immigrants themselves. No matter how you respond, they will always be some angle to isolate and deem racist. There isn’t a long game plan such as creating new voters. At leastt not above the table voters. Under the table maybe.