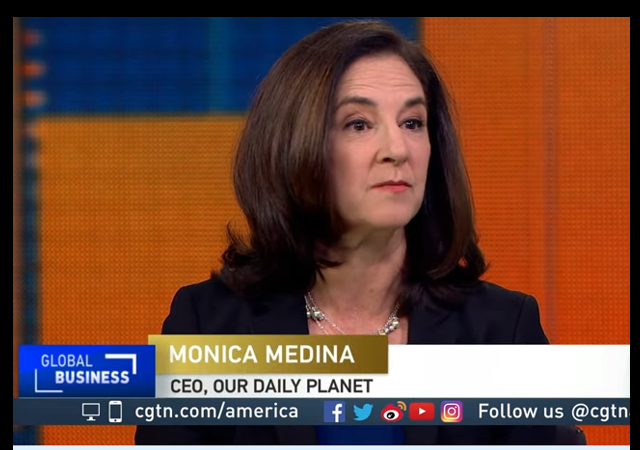 This summer, Mary Chastain noted that the Washington Post detailed all the jobs taken up by family members and other relatives of aides in Joe Biden’s administration.

She cited specifically White House Chief of Staff Ron Klain’s wife, Monica Medina. Medina had been nominated to serve as the assistant secretary of state focused on oceans and the environment.

As we head into fall, Media is essentially now the nation’s Biodiversity Czar.

The U.S. has a new diplomat tasked with combating threats to plants, animals and water worldwide. It’s the first time the State Department is linking the issues of biodiversity and water in one role.

“The loss of nature and rising water insecurity are global health threats that must be confronted together,” Secretary of State Antony Blinken said in a tweet.

Monica Medina will take on that role as the Biden administration’s special envoy for biodiversity and water resources.

The twin crises are intertwined and influence efforts to address other issues, including climate change, food security and economic growth, the State Department said, necessitating Medina’s “all-of-government” approach to the new position.

Who is Monica Medina?

When the announcement was made, WaPo drew criticism about neglecting to identify Medina’s spouse.

In the paper’s “Climate 202” newsletter, the Post reported that State Department official Monica Medina was being appointed to a brand-new position as the “special envoy for biodiversity and water resources,” something the Post dubbed “a diplomat for plants and animals,” without mentioning she’s the wife of White House Chief of Staff Ron Klain. It later did after criticism grew online.

“The Washington Post wrote a whole piece about Monica Medina getting a new high-level diplomatic job without once mentioning that she’s the White House Chief Of Staff’s wife. Seems relevant to report to your readers,” Daily Caller reporter Dylan Housman tweeted.

“Hey, @whcos, can I have a fake taxpayer salary, too, or do I have to marry you first?” Washington Examiner deputy editor Grant Addison wondered.

Medina’s appointment comes just before an international biodiversity conference taking place in Montreal in December, and the move by Team Biden is receiving criticism.

The UN Convention on Biological Diversity, also known as COP-15, is a gathering aimed at creating international frameworks for conservation.

Some critics, like Rep. Yvette Herrell (R-N.M.), view this appointment as a misplacement of priorities. This is especially highlighted by other State Department positions that remain vacant, like an ambassador to Italy, reports the Daily Mail. The position is still vacant just as Italy has ushered in far-right leader Giorgia Meloni as prime minister.

As a reminder, Klain himself managed to nab a sweet gig in the Obama administration as the Ebola Czar (with no administrative experience, medical training, or infectious disease expertise).

And the fact that Klain is the White House Chief of Staff goes a long way to explaining the current state of our country.

As Medina is now overseeing policies to prevent “food security,” my concern about the issue has substantially increased.

I saw her position mocked elsewhere as
“US Ambassador to Plants and Animals.”

I never heard the term “Sharpiegate” before. My mind immediately went to the 2020 Arizona election issue where Sharpies that bled through the ballot paper and invalidated ballots had been issued in heavy red districts. Couldn’t figure out why a proggie would be pushing that one.

It has to do with Trump and Hurricane Dorian.

If I could talk to the animals, just imagine it
Chattin’ with a chimp in chimpanzee
Imagine talking to a tiger, chatting with a cheetah
What a neat achievement it would be

If we could talk to the animals, learn all their languages
Maybe take an animal degree
I’d study elephant and eagle, buffalo and beagle
Alligator, guinea pig, and flea

I would converse in polar bear and python
And I would curse in fluent kangaroo
If people ask me, “Can you speak rhinoceros?”
I’d say, “Of courseros, can’t you?”

“food security” is in scare quotes at the bottom….did someone else make a gaffe and say that her job was really to “prevent ‘food security'”? or is this a gaffe in this post?

Everytime I hear the word “Biodiversity”, I am reminded of a Biodiversity Conference in South Africa back in the 80’s where they began to map out a strategy to kill off HIV.

The irony was lost on all participants.

What a nearly perfect load of BioCrap!?!

From now on I will be a technical vegan. I shall eat only grain, nuts, fruits and vegetables, after an animal processes them into meat.

Well inflation is getting bad. So Ron created a new job that had loads of compensation, and gave it to his wife. Now, they have more money to spend in the Klain household.

Why not? Every Marxists Seminary has a dozen

“Public service” is now manifestly about “self-service,” at least under the vile Dumb-o-crats.

At first glance I thought it said “biodiversity cigar” and called my local tobacco store to see if they had any. They said somebody has been blowing biodiversity smoke up your ass.

I have noted this phenomenon. A nation-wide search is conducted and the best candidate invariably is found, right there in the principal searcher’s family.

Tryin to do things “diplomatically” they can’t get done administratively, let along pass a law for.

Biodiversity, except for eagles. No shit, I’m not kidding. Have a look.

she bears an uncanny resemblance to a younger pelosi

The Dumb-o-crat apparatchiks’ idiotic conceits are so farcically quixotic. These idiots can’t govern with a scintilla of basic competence with regard to kitchen table issues, they can’t tame Bidenflation and they’re doing their best to destroy American energy independence, but, the Dumbs will gleefully aim their lances at the windmills of “climate change” and “biodiversity,” all while engaging in their usual bouts of self-congratulatory narcissism. It would be laughable if the implications for U.S. citizens weren’t so grievous and damaging.

That is one grim lookin’ woman. Ron probably asked Jill if she would ask Susan Rice to ask Joe if he would find someone who’d give her something to do that would get her out of the house and no one wanted her so they had to invent something.

The job of the biodiversity czar will be to help promote environmental crisis hysteria and draconian international responses. No knowledge or competence required, just a commitment to forcing the commoners to obey.

Hopefully she will distribute gov’t resources to underserved plants and animals according to considerations of equity and color.

I can’t help but think of this: