Biden only promised members of *his* family would not have jobs in his administration. It does not apply to those he has hired. 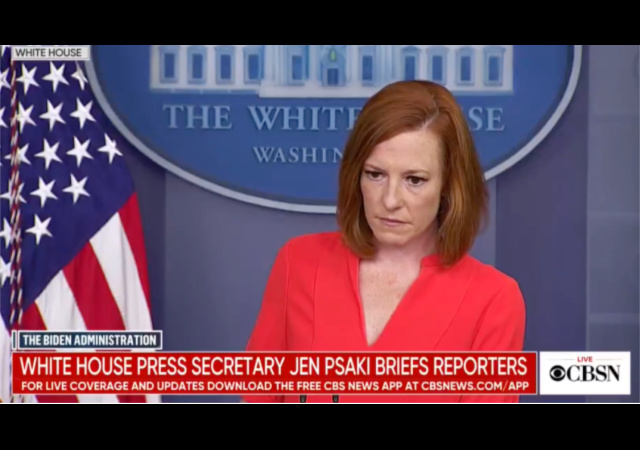 Remember when the left exploded when former President Donald Trump brought on his children and son-in-law Jared Kushner? He had no ethics! No one hires family!

Biden promised in January: “No one in our family and extended family is going to be involved in any government undertaking or foreign policy. And nobody has an office in this place.”

Ah, words are powerful because Biden only addressed his family. The Biden family.

I guess ethics only applies to the president?

The topic came up after The Washington Post detailed all the jobs taken up by family members and other relatives of aides in President Joe Biden’s administration.

CBS reporter Nancy Cordes asked Press Secretary Jen Psaki about the WaPo story, specifically about any “safeguards the administration has in place to make sure that the children of top officials don’t get preferential treatment in hiring.”

Well, let me say first that we have the highest ethical standard of any administration in history. A number of ethics officials have conveyed that and we are proud of that. We have also staffed up at an unprecedented pace and this is the most diverse administration in American history. So, we certainly expect that everyone will abide by those high ethics standards. That applies in how we operate, it also applies how hiring is done.

After reports of Biden administration jobs going to children and relatives of top aides, @nancycordes asks what "safeguards" are in place to prevent "preferential treatment"

Psaki: "We have the highest ethical standards of any administration in history" https://t.co/Nj065CIsxp pic.twitter.com/gIc5S1pHYB

The WaPo article concentrated on Biden counselor Steve Ricchetti, whose son J.J. Ricchetti landed a job at the Treasury Department.

Daniel Richetti, another son of Steve, landed the job of senior advisor in the undersecretary of state for arms control and international security office.

My goodness, there are so many more:

Former ethics watchdog Walter Shaub, who served under former President Barack Obama and Trump, tore into Biden on Friday within the WaPo article. He is one of the few who has remained consistent.

Shaub disapproved of Trump’s family involvement in the government. He disapproves of Biden: “While it may not be as bad as appointing your son or daughter to a top government post as Trump did with Jared and Ivanka, it is still bad. ‘Not as bad as Trump’ cannot be the new standard.”

I’m sorry, I know some folks don’t like hearing any criticism of him. But this royally sucks. I’m disgusted. A lot of us worked hard to tee him up to restore ethics to government and believed the promises. This is a a real “fuck you” to us—and government ethics. https://t.co/NRuc7hpOHi

Aside from telling an outright lie, Psaki failed to answer the question.

Valerie, she answered it by her sleaziness, in her willfuly participating in sleaziness.

Anyone with a grain of integrity stuck doing what she’s realized she’s actually doing would have resigned.

I get the feeling that Psaki believes if she clicks her heals together 3 times and says ‘highest ethical standards of any administration in history” over and over, somehow it will come true.

Are Joe Biden and his son still on the Chinese payroll?

“Well, let me say first that we have the highest ethical standard of any administration in history. ”

Chico Marx in Duck Soup: “Who you gonna believe, me or your own eyes?” Sorry, Psaki.

I did not think we could get a more corrupt government than what we had under the Clinton era.

There is a deep dark pit that seems to have no bottom. It is a long fall and a long way down, but eventually you get there, and what you find is Hell.

I hope the virtue of the people may one day be reborn. The future of the nation depends upon this rebirth, and eventually it will be reborn, but I fear not be within my lifetime.

“I did not think we could get a more corrupt government than what we had under the Clinton era….”

Obama dwarfed it. Biden is dwarfing the corruption of Obama.

I did give her a chance.

But she’s an a-hole for selling herself our to be a disgusting liar. Not eve the sleaziest criminal defense attorney would sell herself so low.

Hunter won’t have a job in the Biden administration. He’d have to take a 93% pay cut.

Does she eat with that mouth?

How many did she place?

And the beat goes on…

David’s wife Tara currently works in BATF, which would make him her boss.

Tara is quite the partisan Democrat, to the point where openly violating the Hatch Act on social media doesn’t seem to bother her one bit.

David himself is currently an employee of the Giffords gun-control organization, run by Senator Mark Kelly (D) of Arizona, husband of Gabby Giffords. Mark has no inclination to recuse himself for the confirmation vote.

The interlocking is so tight in the Democratic Party that if two random officeholders had an affair, it’s better than even money that it would legally be incest.

“Ethical” is one of those words, like “sustainable” whose definition gets all fuzzy the more it is used, especially by Leftists

“we have the highest ethical standard of any administration in history”

When I was in business, a good friend gave me excellent advice. He said: “In all your dealings, conduct yourself so as to be beyond reproach. Even the appearance of misconduct is enough to be judged as guilty.”

I found his advice to be extremely wise.

Psaki is a good example of why PR hacks, propagandists, are widely disrespected.

Ginger you must be holding that chat upside down. like you did with gun crimes. Data for the 10 years before 2014 show gun sales increased while gun crime dropped.