“The doctor who issued Fetterman a clean bill of health has given tens of thousands to Dems over the years, and donated to Fetterman’s campaign before and after he became a patient after the stroke in May.” 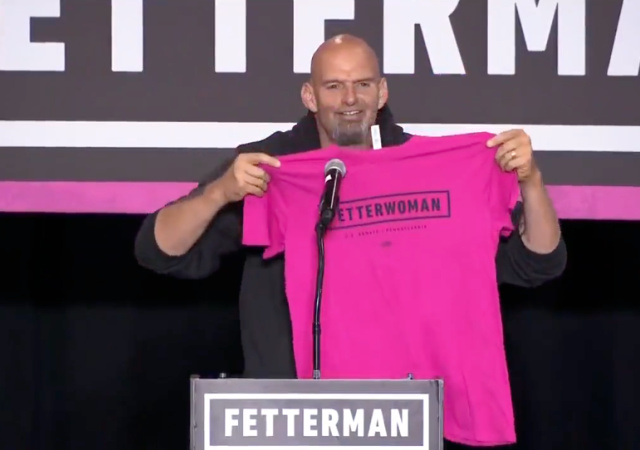 The mainstream media boasted a doctor gave Pennsylvania Democrat Senate candidate John Fetterman a clean bill of health. Questions have arisen lately due to his stroke in May.

News: @JohnFetterman releases an updated medical report after a visit with his primary care doctor.

Letter via his campaign 👇 pic.twitter.com/i75J7utrR0

The Washington Free Beacon mentioned something the media buried or ignored: the doctor donated to Fetterman’s campaign and Democrats.

The doctor who issued Fetterman a clean bill of health has given tens of thousands to Dems over the years, and donated to Fetterman's campaign before and after he became a patient after the stroke in May.

I usually wouldn’t think much of it. But with the way Fetterman, his campaign, the media, and the Democrats have responded to the stroke and his recovery, I don’t know how you can’t raise your eyebrow with the information:

Chen’s political leanings could raise questions about his medical assessment of Fetterman, whose race against Republican Mehmet Oz could determine which party controls the Senate. According to campaign finance records, Chen has given tens of thousands of dollars over the years to Democratic candidates and party committees. He contributed $1,330 to Fetterman’s campaign, including a $500 donation in June 2021, before he became Fetterman’s doctor. Chen donated to other Senate candidates running in close races this cycle, including Rep. Val Demings (D., Fla.) and Sen. Raphael Warnock (D., Ga.).

The media and the left tried to steer the attention away from Fetterman, but some Pennsylvania outlets pushed him to release medical information and debate Republican candidate Dr. Mehmet Oz. Some leftists even started questioning Fetterman.

But those voices didn’t get much attention, even though one belonged to The Washgington Post editorial board. Look at how the media treated NBC reporter Dasha Burns. All she said was that Fetterman “has a hard time understanding what he’s hearing” and making small talk.

But since Fetterman is healthy, I guess he can debate Oz now, right? No excuses!

Let me find my shocked face.

Oh we’re getting stroked all right…..

And it won’t be long before Fetterfrog is croaked.

This is worse than having no doctor’s note at all.

I don’t care what any doctor says. I’ve heard the moron speak.

I do reserve the possibility that he is simply not that bright to begin with.

And I have never heard of a stroke making you smarter.

Give the guy a break. There are many different kinds of intelligence and modes of expression. His just happen to be the stupid and inarticulate kinds.

I would challenge anyone here to produce a vegetable who is in better health than Fetterman. He is certainly no worse that the potato in the White House.

Maybe it is the same “doctor” that said Biden was “healthy and vigorous.”

You can shop doctors like judges and psychiatrists; there is always one around to say what you want to hear.

Him not being as bad as the pedophile-in-chief is not exactly a ringing endorsement.

Everything, but everything, about the Democrats is duplicitous.

I read it as Dr Who had issued a letter. Duh.

Maybe Dr Oz will give him list of: 5 Items Already In Your Refrigerator That Can Make You Smarter!

He better eat fast and in mass quantities….

“Who are you going to believe? Me with this letter, or yo our LYING eyes and ears?” – Fetterman.

Martin Luther said, “I have a dream. In my dream the FBI raided Fetterman’s house. They found 969 XXXXXL dirty flannel hoodies and one suit that had never been worn.”

The only medical assessment of Fetterman that sounds credible is a recommendation that this ne’er-do-well, parasitic, criminal-coddling sociopath be placed in a straitjacket and confined to a mental institution, posthaste.

Where does campaign finance law say this type of in kind donation get reported?

Only in dumps of political family laptops and diaries.

“But since Fetterman is healthy, I guess he can debate Oz now, right? No excuses!”

Tucker exposes the Democrats’ favorite hypocrisy about these pols:

You aren’t allowed to talk about the fact that he can’t function without assistive technology because he has a genuine impairment and must be accommodated.
But you also can’t bring up the fact that he is genuinely impaired, because that makes you an ableist bigot.

That was the Dr, Oz campaign’s response. Since his doctor says except for difficulty hearing he has no cognitive or speech impairments then that means he can do two full debates and take live questions.

Alone onstage. Without his wife.

Of course, Sloe Joe may have given the real game away when he made that campaign stop for Joe Fetterman. He said, “Jez (he was trying to say ‘Giselle’ but of course he slurred it), you’re going to be a great lady in the Senate.”

Apparently the Dem plan is to lie their way to get Joe Fetterman across the finish line, he gets sworn in, stays a few months, resigns for health reasons, then the Dem governor of PA appoints Giselle as his replacement.

I thought Doctor Who was a fictional character.