I wonder how long Mayor Lori Lightfoot will remain welcoming to the people. 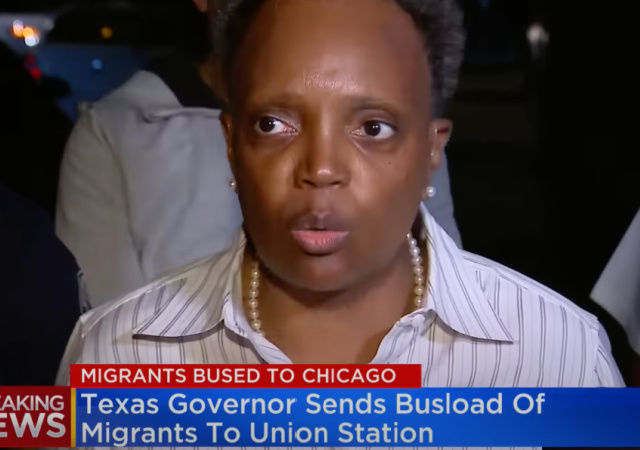 “President Biden’s inaction at our southern border continues putting the lives of Texans—and Americans—at risk and is overwhelming our communities,” Abbott said in a press release. “To continue providing much-needed relief to our small, overrun border towns, Chicago will join fellow sanctuary cities Washington, D.C. and New York City as an additional drop-off location. Mayor [Lori] Lightfoot loves to tout the responsibility of her city to welcome all regardless of legal status, and I look forward to seeing this responsibility in action as these migrants receive resources from a sanctuary city with the capacity to serve them.”

At least for now.

Lightfoot is embracing illegal immigrants with open arms. From The Chicago Tribune:

Speaking to tired families and children, Lightfoot recalled, she “just told them that we would be here for them.”

“I think they were all very, very grateful after the journeys that they’ve been on traveling from their home countries and treated as coarsely they were by the governor of Texas, coming here and finding a completely different experience, I think some of them were a little bit surprised,” Lightfoot said at an afternoon news conference. “But I think as the reality that we are going to treat them with dignity and respect really sinks in, I’m confident that the burdens they’ve been carrying are going to be a little bit lighter.”

Lightfoot wasted no time responding, saying her administration had spent weeks preparing for the possibility and criticizing Abbott for what she said were “racist,” inhumane and xenophobic acts.

“Gov. Abbott has confirmed what unfortunately many of us already had known that he is a man without any morals, humanity or shame,” Lightfoot said. “Instead of treating these individuals with respect that they deserve or the due process that our require. Gov. Abbott chose instead to inhumanely load them onto buses, send them on a more-than-12-hour journey across a country that they don’t known and drop them off without any regard for what the next steps are. These are human beings. Moms and dads, young children, elders who deserve our respect and dignity. They’re not cargo. They are not chattel. They’re human beings.”

Does Lightfoot have any idea how many illegal immigrants are still in Texas? A lot and a lot more come across the border every day.

Lightfoot said she is “happy to take and drain Texas of all its residents” because she “wouldn’t want to live in a state with a governor like that.” She then accused Abbott of stripping “people of their basic rights.” Of course, she only brought up abortion because that is totally a basic human right.

Lightfoot also bragged Chicago is “a welcoming city, a city where we live our values every single day – a city whose immigrants and refugees have been a part of the fabric of the city from our earliest days.”

Well, Lightfoot is correct about the immigrant. Italian, Irish, Polish, and some Germans. There’s a reason Chicago and the surrounding areas have so many Catholics with a splash of Lutherans!

Let’s not forget the women-owned small businesses closing shop and moving to the suburb.

“Where was her outrage and condemnation of President Biden as he flew planeloads of migrants across the country and dropped them in communities in the cover of night? Mayor Lightfoot knows nothing about Texas’ busing strategy and needs to stop with the baseless lies and fearmongering. Texas continues stepping up and responding to the Biden-made border crisis, taking unprecedented action to address the historic levels of illegal immigrants, terrorists, and deadly drugs like fentanyl that are surging into our communities and overwhelming border towns,” Abbott’s press secretary Renea Eze said.

“If the mayor wants a solution to this humanitarian crisis, she should stop complaining and call on President Biden to take immediate action to secure the border—something the President continues failing to do,” Eze added.

Clearly Gov Abbott is trying to get the illegal aliens shot. Else he wouldn’t be sending them to such dangerous cities.

You have to add /s or people don’t understand your comment. I thought it was funny. I like the old meme of the snowplows plowing all the spent cartridges off the streets of Chicago on Monday morning.

Let’s call it an exchange program. Send the immigrants to Chicago and welcome the small business owners fleeing the high taxes of Chicago.

No thanks, they can stay there. They more than likely voted for the Dim morons that turned Chicago into a shithole in the first place. They made their bed, let them lie in it.

The Feds are shipping illegals to suburban and country locations around the country. By air. At night. When no one’s looking.

Perhaps Mayor Lightfoot is not aware?

It’s the Democrats way….pushing things through in the dark before light shines on it to see it for what it is.

Clearly, they aren’t sending them to Chicago, NYC or DC.

“I’m confident that the burdens they’ve been carrying are going to be a little bit lighter.”
I am, too, especially if their attention wanders.

Abbott should start running buses to Canada next, Trudeau literally said he would accept all comers.

Something is going on here. It’s not the problem of illegals in and of themselves, or else the border would be sealed in the first place. And it’s not the number of illegals being bused, because the federal government is flying more all over the damn country, and the numbers showing up in DC and NY and Chicago are infinitesimal.

If these dumb mayors would just shut up about it, no one would know. Is it the fact that people know? Is that the real issue here? Is what Abbot is doing hurting (D) politicians?

One it is hurting them to some extent because they were all talk about sanctuary city stuff but never allocated enough money. Now they are short money.

The second thing is the Democrats think can paint Abbot, Texas, and Republicans as racists but I don’t see it gaining much traction country-wide. It’s just looks like whining.

Do (D)s need another excuse to call Republicans racist? I will say that if people who did not live in Texas actually lived in Texas they would see how the Hispanic culture is deeply intertwined here. I mean, we started out as freaking Mexico. You go to the border cities and the difference between Mexico and the US is just a line on a map. We don’t have as many burning 50 gallon drums full of chopped up cartel victims, that’s a check in our favor.

So are Lightfoot, Hochul, Bowser, Adams, et al, of the mindset that the illegal immigrants ought to remain in the states they originally entered (TX, NM, AZ, CA)? Four states are supposed to bear the entire weight of illegal immigration?

How is it not racist, inhumane and xenophobic to tell them stay where you are? They don’t say it directly, but the attitude they show when condemning the 4 states for busing them elsewhere certainly suggests they’re racist, etc. NIMBYites.

It’s no accident that the Underground Railroad terminated in Canada.

Canadians are awfully protective of their Molson’s.

Ann Coulter says the first thing to do when your tub is overflowing is to turn off the facet.

Our marxist government insists on increasing the flow!

His sidekick Patton, who I use to like, said, “ no, it’s NOT an invasion because… get this

THEY Don’t Have Uniforms On”

No one buys what you are selling on this. Abbott may not be a ferocious attack dog, but he is on your side. But you and those like you can continue to launch your solitary purity war campaign alone and cause us all to lose if you won’t go to war with what you have and sort the other problems out later.

I live in Texas, I voted for Abbott twice, not in the last primary

He’s weak on the border and is grandstanding

He’s bought and sold to the green companies, done absolutely nothing to increase fossil fuels for our energy grid amd delta on wind, which is BS and proven so a few years ago

I live here so suck it. I know Abbott
He’s a globalist and weak at heart. He’s always second in response to DeSantis and wouldnt make many decisions if DeSantis wasn’t pushing him

Give him a call. Maybe he can find you a seat on the next bus out.

Why don’t you take it, being a Vet and all

I’m not the one whining.

Let’s say Abbott does declare an emergency and invasion. Then what? Mobilize the TXNG? The Biden WH can simply put the NG on Federal duty and order them to go home. Same for the unorganized militia.

You seem to be arguing for the State of TX to provoke an armed confrontation with the federal government by refusing to submit in that situation. Recall George Wallace who used his authority to call up the Alabama NG to support his ‘stand in the schoolhouse door’; the WH placed them under Federal authority and they correctly stood down as ordered.

The ‘invasion’ idea won’t work as a practical matter unless you have a POTUS willing to back the govt of TX. The Biden WH isn’t going to do that.

If you have an alternative the please explain.

Now this is inhumane. Sending them to Chicago? They would be better off back in El Salvador or Venezuela

The question is what is better for us, that is what matters. These people are not our responsibility.

Sounds like she wants more…divert all NY and DC illegal buses to Chicago immediately.

She’ll
Prot find them housing on the South side of Chicago, rooms are available on a daily basis there.

Every time I see her(?) face, I grab a flyswatter.

“Illegal immigrant” is a contradiction in terms. Immigrants are legal. These people are not immigrants. They are criminals. Illegal aliens.

Let’s get this straight. The alien mayor first derided Abbot and said it was nothing but a political stunt. I think several polls that pointed out the optics of a Sanctuary City refusing illegal aliens was not a good look and wishing to deflect from the murder city she has created, she relented and is singing a different tune to try and save her job. Abbot should oblige and start Amtrak’s to the north. Funny how Sanctuary is all fun and games until it arrives on your doorstep

Give Mayor Groot a couple more bus loads and she will go absolutely batshit crazy with rage.