This is what you wanted, Adams. Sanctuary city! 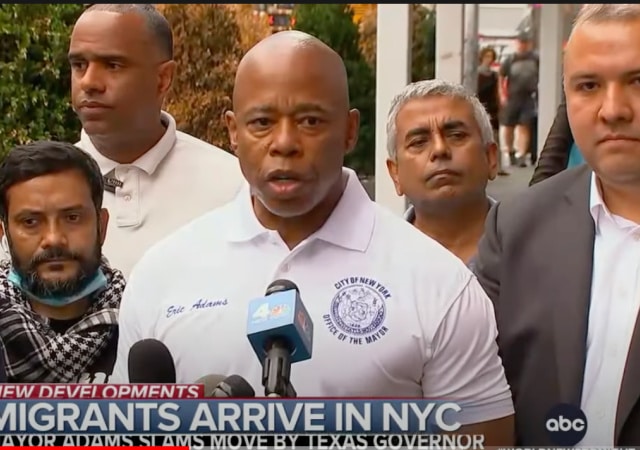 Adams criticized Abbott after the second bus of illegals from Texas arrived at the Port Authority.

But it doesn’t take much brain power to read between the lines and know Adams is frustrated that Abbott is forcing him to practice what he preaches:

“This is horrific when you think about what the governor is doing,” Adams said, noting that many of the arriving families did not realize they were coming to New York City.

I’m not going to stop documenting the drama.

Adams said New York City is a sanctuary city. He is one of many Democrats who go along with the Biden administration’s chaotic immigration system or lack of.

Abbott didn’t even send illegal immigrants to NYC in his first order in April. The governor and Arizona Gov. Doug Ducey bused them to D.C. But Adams complained about the influx of illegals in NYC’s homeless shelters and pointed his finger at Texas and Arizona when we all know the feds flew illegals to New York at night.

Abbott invited Adams and D.C. Mayor Muriel Bowser to the border to witness the crisis. He wants to show these Democrats what the open borders are doing to towns and cities nowhere close to the size of their cities.

Adams never relented, even describing Abbott’s invitation to the border as a photo op instead of taking the opportunity to witness the border crisis.

Governor Greg Abbott today announced the arrival of the first group of migrants bused to New York City from Texas. The migrants are being dropped off this morning on a green bus at Port Authority Bus Terminal at Gate 14. In addition to Washington, D.C., New York City will now be a drop-off location for the busing strategy as part of the Governor’s response to the Biden Administration’s open border policies overwhelming Texas communities.

“Because of President Biden’s continued refusal to acknowledge the crisis caused by his open border policies, the State of Texas has had to take unprecedented action to keep our communities safe,” said Governor Abbott. “In addition to Washington, D.C., New York City is the ideal destination for these migrants, who can receive the abundance of city services and housing that Mayor Eric Adams has boasted about within the sanctuary city. I hope he follows through on his promise of welcoming all migrants with open arms so that our overrun and overwhelmed border towns can find relief.”

It’s funny because Adams is also putting pressure on the Biden administration to help them out with the illegal immigrants.

If Adams wants to accuse someone of using illegal immigrants as pawns, he needs to look at his own party and the White House.

Maybe if we stopped calling them immigrants, they are criminal invaders. Period.

Adams is a man who holds an office that is above his pay-grade.

That observation can be extended to the axiom that every single Dumb-o-crat holds an office above his/her pay-grade. These apparatchiks are simply worthless locusts and leeches. I wouldn’t trust them to clean a toilet.

“Abbott didn’t even send illegal immigrants to NYC in his first order in April.”

But now that Abbott knows what gets under the skin of a Democrat mayor, that’s the signal to pour it on, pedal to the medal, all-systems-go.

Send them to one of Pelosi’s mansions, point to it and say, “There. That’s your new home. Go take it and don’t take any crap from anyone who says it isn’t.”

My school (so far) has just under 500 students. We have about 30 young elementary students who do not speak English, yet.

Tell me more about your resources being strained, giant city.

I have had that issue. The school just dumped them in with the leaning disability class.

Why don’t they use the long hot summer to teach these kids English???

You are a teacher?

My experience is that very young hispanic kids are just dropped off at the front of the school with no enrollment. Takes a while to sort it all out and the little ones are terrified and crying for most of it. Really heartless stuff.

In my area we have a few faculty that can speak Spanish, but thankfully we have older kids that have been through it that help out. They shouldn’t be in that position, either.

My kids used to attend a Christian school, and they were periodically taking in the “immigrant” children.
The entire school became infested with head lice.
And it kept recurring… more kids, more infestations.
The school, Private, did not survive and closed just prior to Covid due to economic conditions… no other reason.
But my kids have never had that problem, before or since.

I think Seattle, Portland, Boston, San Fran and LA should be the next destination cities.

And Aspen and Vail, and Ashland OR, and the Hamptons, and Hyannis Port, and Poulsbo (hoity-toity town on an island west of Seattle), Seattle itself, Santa Fe…

This. So much this.

Rather than Boston for MA please send buses to:

1. Cambridge but not East Cambridge or Central Square. I mean Harvard Square, perhaps even Harvard Yard or the neighborhoods just west of the square where all the limo libs live. Brattle Street would be a good start.

Then, just to mix is up a bit, run some out to western MA too… Amherst and East/Northhampton would be just great

When Trump was ramping up border security didn’t the Ivy League schools & students (I remember Columbia specifically) say they would not help ICE and that they were Sanctuary sites? I’m sure these schools, their alum, paying parents…etc see the value that over run campuses, dorms and other services can have on their quality product. Maybe they’ll teach them all English or resume~ enhancement

Absolutely they did. Totally proud of how virtuous that made them look

And (and I think I’ve posted this cartoon before) Chevy Chase!
Its worth following the whole storyline, which runs from 4/1 to 4/10/21 (but not all consecutive days).

Ideally ones (to start) that are isolated enough they can’t simply move them along elsewhere. (Like that island Griz mentions.)

Considering that it’s about 1300 miles from San Antonio to Tegucigalpa whereas it’s an additional 300 miles to NYC, I think Governor Greg Abbot should re-evaluate, consider saving the inhabitants of the great state of Texas some money, and send these people off for a vacation in Honduras.
Havana is even closer.

Open borders doesn’t mean just for the border communities. It means the entire country. Let not get in the way between the sanctuary cities and those they offer sanctuary. They certainly need more Republican voters.

NYC Mayor Adams Thinks It’s ‘Horrific’ that Abbott Sends Illegal Immigrants to the Sanctuary City
That’s what we’ve been telling you all along, d***us. That it’s horrific to send all these illegal aliens to the US. But you keep encouraging it….

Is Adams truly that painfully ignorant of his own actions, or just playing politics.

They are not mutually exclusive.

Adams is all talk and no action.

Abbott could send a bus or two out on Long Island. And a maybe Nantucket.

The Hamptons have plenty of room and lots of sanctuary supporters…

Definitely. Since the inventory of these no-skills, non-English speakers is endless there’s plenty to go around.

And it’s not like you could just get ’em all jobs on the Supreme Court, because they’re only taking blacks these days.

Nantucket is tough to get to by bus ; )

But the ferry ride alone would be like Disneyland to most of these people.

These d/prog who have been largely insulated from the consequences of their policy preferences are beginning to crumble in the face of reality. It’s one thing to signal virtue it’s quite another thing to demonstrate virtue by individual actions. IMO, this is analogous to the d/prog arguments the ‘society’ should do x.

They substitute govt and taxation for personal acts and voluntary charity. They simply can’t visualize voluntary acts of kindness and charity as solutions because that charity has limits imposed by each individual because for many d/prog based on tax forms they have little to no demonstrated personal commitment to supporting the costs of their policies.

hey Mister Adams these foreign criminal invaders didn’t come from Texas or Arizona, they came from elsewhere and Biden’s administration are letting them in

We hardly need to bus illegal immigrants to Los Angeles or San Francisco or anywhere in California since they find there way there in droves anyways. But these Democrat strongholds far from the border – DC, New York, Boston, Chicago, etc. – don’t get their fair share of them. The Democrats insist that illegal immigrants are a valuable resource, so good for Texas and Arizona sharing the wealth.

Sanctuary city, sounds like a place where the people would want to help out. Here in Texas, our folks taught us to share. In Sunday school we learned were supposed to love everyone, all the time. And not just those who look like us gringos. Thousands cross each month. Some go to DC and some to NYC. Dont get your knickers in a twist, Mr Mayor, we still have plenty of them. And we’re doing the best we can with what we’ve got as fast as we can. We just need a little help now and then. We thought a sanctuary city might be the place to look. Sorry for the short notice.

For sometime now I have placed “Adams thinks” and “Biden thinks” in the same category of unthinking fools and idiots.

Biden’s problem is he has dementia.

Adams is so stupid he thinks he’s smart.

So, this is all Abbot’s fault.
Gosh, imagine that.

2 buses? That’s it?
Something else is going on with the complaining.

And the buses are only partly full.

Hey, you wanted them. You declared yourself a sanctuary. He’s just giving you what you wanted, good andhard.

Er these folk are called Undocumented Migrants by the Left for a reason. Why should Texas document illegals being transferred to DC or NY?

IMO it is not grandstanding by Abbott either. The financial cost of retaining an illegal in TX could be two orders of magnitude (100x) greater than the cost of the bus ride. That is a phenomenal ROI for bus rides.

Sanctuary Cities advertise themselves as being the best places for illegal aliens, so it make sense to send them where they will be well cared for. Unless the mayors of Sanctuary Cities have been lying to us all along.