The city has become – I won’t even say, Gotham City is a little bit better, because you have Batman.” 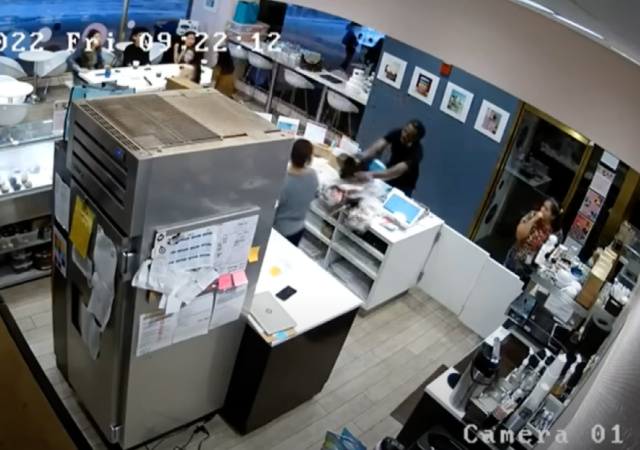 CBS Chicago discovered the increase in crime has caused quite a few women business owners to flee to the suburbs:

As CBS 2 Political Investigator Dana Kozlov reported, one of those owners has a long history downtown. She owns Sugar Bliss, at 122 S. Wabash Ave. in the Palmer House Hilton building, which has been in business for more than a decade.

But after someone vandalized her store and tried to steal a purse while she was in the shop, last week, she is rethinking her future in Chicago – and she is not alone.

Ging said stress has replaced the joy of working in her cupcake and cookie storefront. Incidents like the one that happened this past Friday are the reason.

“He came in the front door of our store, then came around to the cash register,” Ging said.

It took place as Ging had a Women in Business Networking meeting. She claimed this type of crime “happens once a month, at least.” She sent letters to Mayor Lori Lightfoot and other officials.

Uzma Sharif, the owner of Chocolat Uzma, is headed to the suburbs:

“We can’t live like this. The city has become – I won’t even say, Gotham City is a little bit better, because you have Batman,” Sharif said. “Here, you don’t have Batman – you know what I mean?”

After nine years in Pilsen, a 2021 burglary, and a friend’s carjacking just blocks away, Sharif is closing her retail shop at the end of September and moving it to the suburbs.

The suburbs, she said, are “where they have the well-funded police departments and where they want our business. It’s going to be DuPage or Will County.”

Sharif told CBS Chicago hiring a 24/7 security guard is the only way to keep her in the city.

Ging has to stay in the Loop due to her lease. But she decided to choose “a new manufacturer for her prepackaged cookies.”

Robbery, burglary, thefts, and carjacking continue to rise in Chicago.

Arrests and reporting of crimes have gone down:

The police have made arrests in just 12% of crimes reported last year, according to a Chicago Sun-Times analysis. That’s the lowest level since at least 2001, the first year the data was made publicly available.

The overall arrest rate peaked at nearly 31% in 2005 and has dropped steadily.

The decline in arrests mirrors a drop in nearly every category of police officers’ activity tracked by the Chicago Police Department. The numbers of traffic stops, tickets and investigative stops — in which pedestrians are patted down or searched by officers on the street — all have plummeted. The number of investigative stops dropped by more than half between 2019 and last year, falling from 155,000 citywide to 69,000.

And fewer crimes overall are getting reported — by victims and by the police, who used to produce many crime reports themselves while patrolling their beats.

“We can’t live like this. The city has become – I won’t even say, Gotham City is a little bit better, because you have Batman,” Sharif said. “Here, you don’t have Batman – you know what I mean?”

It’s been a full three years you’ve had Beetlejuice instead of Batman.
And you didn’t see this coming?

I’m confused. If being a single woman business owner makes them more vulnerable to crime, why don’t they just identify as men?

Sorry proggies, but you brought this shyte on yourselves when you elected Collectivist morons to be your mayor, Senator, President, etc. I have no pity for you.

The solution to this problem is for a few of these thugs to get shot in the face when they pull this type of crap. Most of the other ones will wise up really, really fast.

And stolen elections have monumental consequences.

The store owner will then be sued by the criminal (or his surviving family members, who will come crawling out of the woodwork) for excessive force or wrongful death, and probably prosecuted by the local DA for assault with deadly weapon or murder.

And good luck getting your insurance company to pay for the attorneys’ fees to defend you, civilly or criminally.

In Chicago? Sure. But that begs the question… why on earth would anyone live in a shithole like that? Myself, I choose to live in a jurisdiction that protects my rights, including my rights to self defense and defense of my property.

I agree completely, large cities only have some cultural assets like museums, and otherwise are varying degrees of shitholes. Small cities or rural living is much better for people.

Well this is totally unexpected. Nobody could have predicted this.

Sometimes you don’t even need to add the sarcasm label.

Most certainly the speed of decline is now stunning.

It sounds like you got exactly what you voted for. Be happy.

Are you sure the shopkeepers voted for this?

We warned you. You decided to do it anyway.

Enjoy getting exactly what you voted for.

12% arrest rate on reported crimes? That’s utterly INSANE. You are almost as well off with no police at all with that arrest rate.

They only keep the police on there now to arrest the victims.

Why can’t they have someone with a 12 gauge in a hidden position kill these criminals?

In a Democrat polity, that would be considered evidence of premeditation in the murder charge.

I predict it will come to that, make sure it is 00 buckshot.

I sure miss that man.

If you think crime in Chicago is bad now, buckle up. Beginning January 1, 2023 the “SAFE-T Act” that Dem. Pritzker signed into law will go into effect for all of Illinois. No cash bail. Criminals will be back out in the streets same day, and they all know it. And when you move to the burbs to get away from crime, don’t bring your Dem. vote with you.

if that truly be the case then then our countrymen in illinois will be living in the wild, wild west–if there’s going to be personal safety for you and your loved ones it will be up to you (and them) to provide it

A friend of mine from CA responds to every complaint about crime by asking sweetly: “So who did you vote for?”

Two thirds of the time the complainer clams up. One third they both start laughing.

Sounds like there’s a “War on Woman” up there in chi-town.