“She engaged in a terrible and quite obvious manipulation of facts, evidence and the law, furthered a false narrative about me, and hid evidence that undermined the Report from the media and the public.”

Cuomo says the 48-page complaint will prove James “cynically manipulated a legal process for personal, political gain.” He also alleges she “purposefully inserted herself in an investigation which posed a clear conflict of interest and then misled the public to create a political situation forcing my resignation, in violation of the relevant rules.” 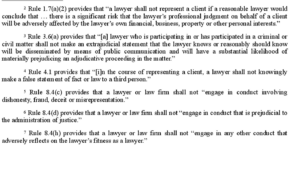 Cuomo resigned in August 2021 after James released the findings of the investigation.

James ran for governor after Cuomo resigned but withdrew to re-run for attorney general. Cuomo mentions her run for governor in his complaint:

I stated to AG James directly, as well as to state legislators, that she had a clear conflict of interest because she would not publicly disavow running for governor. For that reason, I said that an investigation should be undertaken by a qualified independent investigator and recommended alternatives including former federal judge Barbara S. Jones-who was recently proposed by the U.S. Departmenrt of Justice to serve as Special master in the Trump/Mar-a-Lago search case. The legislative leaders insisted, however, that AG James conduct the investigation and threatened me with impeachment if I did not refer the matter to the Attorney General. I directly communicated the conflict to AG James and expressed my opinion that it would be unethical for her to engage in the matter given her personal interest. AG James refused to acknowledge the conflict, persisted in creating political pressure to have the matter referred to her, and refused any alternative to cooperate with any other party to conduct the investigation. I structured a referral that sought to ensure an independent investigation and cure the apparent conflict by only providing AG James with the authority to select an independent law firm to conduct the investigation and deliberately did not grant the Attorney General such authority to investigate on her own. Thereafter, AG James appointed Mr. [Joon] Kim and Ms. [Anne] Clark as deputized investigators, but, for the reasons discussed below, they lacked any semblance of independence -in contravention of my referral. Flouting ethical strictures, AG James evidently intended for the Report, the prejudicial press conference at which she announced the Report but then refused to release all the evidence for scrutiny, and the public narrative that followed to exact maximum political damage and compel other elected officials to call for my immediate resignation. Such damage was done, and I resigned on August 10, 2021, effective August 24, 2021.

Cuomo writes that James “assured” him “she would not appoint a plaintiff’s attorney to conduct the review.” Despite that assurance, Cuomo accuses James of not selecting “‘independent’ investigators.” James picked “a plaintiff’s employment attorney whose practice is focused on representing employees in discrimination lawsuits, and a former prosecutor with whom I had a negative history.”

Cuomo also alleges James knew he has a history with Kim:

Indeed, it was well-known that, during his tenure as Chief Counsel, Chief of the Criminal Division and eventually as Acting U.S. Attorney, Mr. Kim played major roles in the Southern District’s grand jury investigations of my disbanding of the Moreland Commission and in the subsequent grand jury investigation and prosecution of Joseph Percoco, a member of my administration, and that he personally interviewed me during those investigation.

“The Attorney General proceeded with an intolerable personal and political conflict of interest when she selected the investigators, conducted this investigation and issued the misleading and inaccurate Report, announced the Report at a prejudicial press conference without releasing all the evidence for scrutiny, and then how she chose to selectively release some evidence in a manner to advance her political campaign and deeply prejudice me while investigations were pending,” concludes Cuomo. “She engaged in a terrible and quite obvious manipulation of facts, evidence and the law, furthered a false narrative about me, and hid evidence that undermined the Report from the media and the public.”

Cuomo is trying to rehabilitate his image because we all know these people cannot stand not being in the spotlight or holding some position of power.

I hope he wins. This isn’t just a lesser evil thing; I think Cuomo is telling the truth. Letitia James has very consistently been unlawful and partisan in how she enforces the law everything Cuomo alleged is something she has done in other circumstances.

I hope he loses but takes her down with him.

That would be best practice!

Liked because the prospect of NY Dems crushing themselves is appealing; but unfortunately for him to lose means he loses on the issue of what she did being wrong. If it is ok to do it to Cuomo it is definitely ok to do it to us, so we need Cuomo to win.

That said lets say he wins and rides a tide of sympathy into a safe seat for Dems either on a local level or a congressman.

Republican challenger Michael Henry has a slight lead ahead of New York Attorney General Letitia James (D), according to a recent poll.

Didn’t she know she’s only supposed to target conservatives?

Unfortunately it is NY, any Republican doing that would be a kiss of death.

First off let me say that I disagree with Andrew Cuomo on just about everything. In this case, though, he has a point, just not the one he’s making. James accused Cuomo of sexual harassment, but then refused to prosecute thereby depriving Cuomo of his day in court so he could defend himself. Prosecutors cannot do that. Either prosecute or shut up. Mueller tried the same thing with President Trump in volume 2 report which accused him of obstruction of justice, but then Mueller said he didn’t quite have enough to go forward, thereby leaving the President in a justice never, never land. At the time, Mueller was roundly and rightfully criticized for that stunt. In the Cuomo case the same criticism applied.

Abuse of prosecutorial discretion is something the courts can and should curb.

James is truly an unmitigated bitch, and every bit as biased as CNN on a day that ends in Y. When she indicted NRA president Wayne LaPierre for raiding the membership coffers for personal luxury, she insisted that the only acceptable resolution would be to destroy the entire association.

Nevertheless, for a Thunderdome cage match between Jones and Cuomo, I would bid the beer franchise.

I agree with you we should be hoping Cuomo reduces her ability to abuse her power and therefore hoping he wins.

You could however voice your argument a lot better than calling her a bitch.

As a dog breeder, I’ve worried that it’s disrespectful to my dogs, but they know I love them.

For the same reason, I don’t worry about reminding people that Lori Lightfoot has the biggest dick in Chicago, even though I’ve worrked that it’s disrespectful to my burros.

As Krystle Matthews explains, when you are talking to the black crowd, you have to be unafraid to say black shit. “You gotta treat them like shit. I mean, that’s the only way they’ll respect you.” And I do so want the respect of BIPOCs.

Well, Randy-Andy would know the stuff he’s accusing her of.

“…a terrible and quite obvious manipulation of facts, evidence and the law, furthered a false narrative… and hid evidence…”

He’s really quite expert. Now he’s finding some legal seam — she appointed someone he can go after — to get past the rest.

No matter how bad a liberal screws up, they always get rewarded

I grin in schadenfreude.

MeToo is mostly women changing their minds, so I don’t know about disgraced.