He allegedly kissed her twice: “I felt like I was being manhandled, especially because he was holding my face and he was kissing my cheek again.” 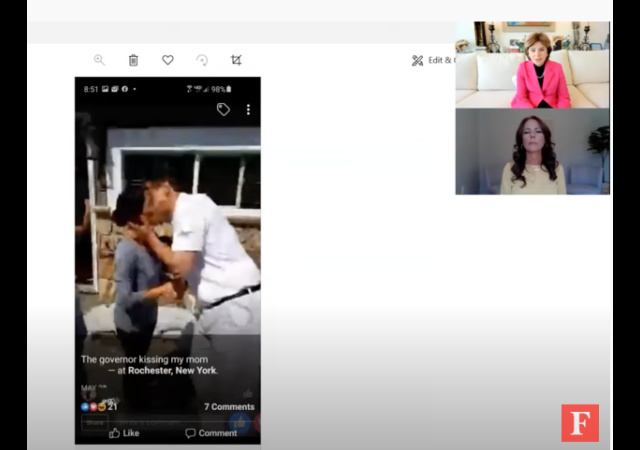 Vill said Cuomo visited her house in May 2017 after floods damaged it. Cuomo “expressed dismay at” the damage:

“The whole thing was so strange and inappropriate and still makes me nervous and afraid because of his power and position,” said Sherry Vill, a 55-year-old married mother of three, as she spoke out in an afternoon briefing alongside lawyer Gloria Allred. “I am still afraid of him, but I am no longer willing to remain silent.”

“That’s when the governor looked at me, approached me, took my hand and pulled me to him,” Vill said. “He leaned down over me and kissed my cheek. I was holding my small dog in my arms and I thought he was going to pet my dog. But instead he went to squeeze between the dog and mine and kiss me on the other cheek in what I felt was a highly sexual manner.” 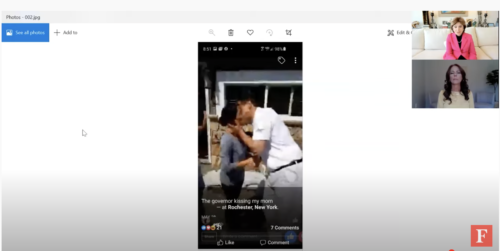 As Cuomo left, he told Vill she is “beautiful,” which made her “feel even more uncomfortable.” After they got outside, Cuomo allegedly kissed her again. Vill’s son caught the moment on video since he recorded Cuomo’s visit:

“I felt like I was being manhandled, especially because he was holding my face and he was kissing my cheek again,” said Vill. “The way he looked at me and his body language made me very uncomfortable. I felt he was acting in a highly flirtatious and inappropriate manner, especially in front of my family and neighbors.”

Vill noted that Cuomo is approximately 6 feet tall, while she stands only about 5 feet.

Vill said Cuomo described the kiss “as a cultural norm,” which is how he explained the other kissing accusations.

“I am Italian, and in my family, family members kiss,” said Vill. “Strangers do not kiss, especially upon meeting someone for the first time.”

(Let me tell you. Vill is correct when it comes to Italians. My family and I greet each other like that. Maybe close friends. The people we first meet? No. Also, my grandma and great-aunts were the only people who ever grabbed my face to kiss me. The rest hold me by the arms.)

“I know the difference between an innocent gesture and a sexual one,” she continued. “I never felt as uncomfortable as I did the day that Gov. Cuomo came to my home. His actions were very overly sexual, highly inappropriate and disrespectful to me and my family.”

Days after the interaction, a member of the governor’s staff left Vill a voicemail asking her if she would like to attend an upcoming event with the governor, Vill said.

Cuomo also sent Vill a letter only thanking her for a visit, ignoring the rest of the family.

Allred said Vill never said anything because she and her loved ones “feared reprisal from the governor.”

Neither one called for Cuomo to resign. They want the investigations in New York to “run their course.”

They both planned to contact Attorney General Letitia James. Vill wants to cooperate with her investigation.

Cuomo will not resign. The man is full of himself and believes he is untouchable.

No. When you see the name Allred, the story no longer matters. Even the vultures won’t roost where she has been.

Cuomo called their bluff. He’s not resigning, and they don’t have the balls to remove him.

Wondered when Gloria Allred was going to show up with a Como accuser.

This may go on a while. More women will tell their story. We Must believe all women because of New rules.

Okay, my first thought upon seeing this small picture:

Hey, welcome to the party, Sleeping Beauty!
Where ya been for the past two months, never mind the pst five years?

Sorry for the snark, but this whole affair reminds me of the old B&W cartoons of a football game, where the QB catches the snap, and the entire opposing team pig-piles on top of him… with the last guy arriving well after it’s obvious the QB won’t be getting up, and heroically leaping to the very top of the pile for his share of the glory.