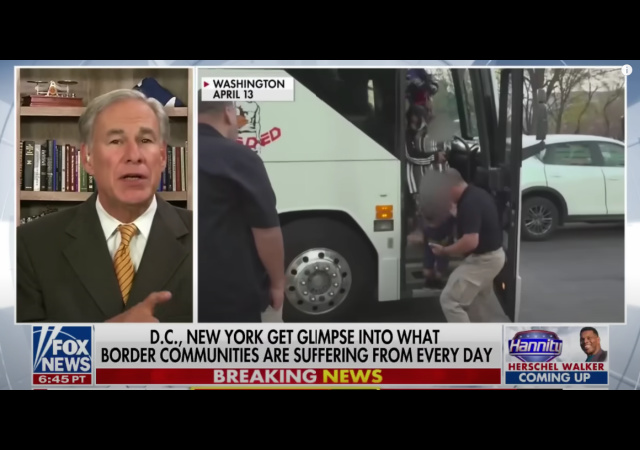 Adams has been complaining about the influx of illegal immigrants to his city, causing major resource problems. DC Mayor Muriel Bowser has done the same.

Abbott sent both mayors a letter inviting them to the border.

“Instead of a photo-op at the border, we hope Governor Abbott will focus his energy and resources on providing support and resources to asylum seekers in Texas as we have been hard at work doing in New York City,” Adams’ spokesman, Fabien Levy, said in a written statement. “We continue to work with federal partners to receive additional financial resources immediately, but will never turn our backs on those in need who are arriving here.”

Adams tried to blame Texas for the influx of illegal immigrants in New York City, but Abbott only sent buses to DC.

Adams and Bowser made their cities sanctuary cities but I guess they didn’t think it through because no one ever saw their problems coming.

You invite a ton of people over without a plan is not the smart thing to do.

Adams. who has been complaining about the influx of illegals into NYC, jumped at the chance to be on The View and. But when invited by Gov. Abbott to visit the border and witness the crisis in person he said “No, I prefer Whoopi.”

Adams can’t refuse them as a “sanctuary city.”

He’s afraid of being at tacked by roaving packs of feral AR-15s that he’s heard run wild in Flyover Country.

He ought to know that they’re not a threat as long as you don’t feed them. Once they associate humans with food, though, bad things can happen.

That’s a lost opportunity for Adams. A high profile visit for a several days getting briefings from CBP, TX DPS and TXNG on the prevention /apprehension side. Then meeting small town Mayors and LEO along with some of the NGOs that work with the influx. It would have set him apart from other d/prog on the issue as a realist seeking solutions short of closing the border.

He could have gone back to NYC and called on the Feds to assist all localities based on a x$ per person formula that has some factual basis. That would get something done. Instead he chose to grandstand and ignore the locations facing the largest influx who have done so for years, despite practically zero help. It unfortunately seems to confirm many people’s view of NYC residents as selfish and uncaring. Good luck on the next bailout for NYC.

Adams appears to be, as Abbott might say, all hat and no cattle.

Or, in New Yorkese, all fedora and no fagioli.

Plus he could have had some good breakfast tacos

Lots of good food and good women in TX that’s for sure.

A good woman who’s no better than she ought to be is something every man needs.

Mayor NIMBY might want to think about helping at the southern border, moves toward helping with Visa apprehension in NYC.

“we hope Governor Abbott will focus his energy and resources on providing support and resources to asylum seekers in Texas as we have been hard at work doing in New York City,”

I have deployed unprecedented resources to prevent, deter, and interdict illegal immigration and transnational criminal activity that threatens our citizens.

Those are two different things. Adams wants Abbott to spend all that money, not on interdicting the infiltrators but on helping them. Which would, of course, only make the problem worse, but Adams is completely blind to that. I don’t think he’s faking; I think he honestly has no idea what’s going on down there, and he doesn’t know that he doesn’t know. Were he to accept Abbott’s invitation he might learn something, but he doesn’t know that there’s anything for him to learn.

You’re onto a good point, which is that progressives fundamentally misunderstand human nature.

I agree. Adam is a woefully ignorant and unprepared man. Not destructive like DeBlasio, but not capable either.

Oh please…Adams has already demonstrated that he’s making it up as he goes in several instance within his own state borders.

But in this instance, his original premise that illegal alien planes were chartered by TX to his state was a total farce that he made up and now he has another tomato on his face.

This guy is not fit to lead a Burger King.

You left out the 2nd half Milhouse. He detailed how much we spent on resources helping them. He just called it helping the towns, who are helping the migrants.

“Texas has spent over $3 billion in the past 18 months to curtail the devastation felt by our communities large and small.”

Or as is often the case with d/prog pretending not to know. Either feigned or real, ignorance is bliss I suppose.

“You invite a ton of people over without a plan is not the smart thing to do.”

Most people learn this in high school, college the latest.

Adams doesn’t feel like visiting the border, because the brand of salsa he prefers is made in… “NEW YORK CITY?!!”

To whoever downchecked this: Hello? It’s the punchline to the salsa commercial Henry referenced.

Kids these days, no classical education at all. And no sense of humor.

That was great ad!

By its nature, the truth is not malleable, changeable, or erasable. It is what it is. Adams knows that if he is exposed to the truth in any form, once back in New York City he might well be charged with politically incorrect Thoughtcrime and violation of Article 58-3. That can lead to being purged.

Sounds like Adams would be happy to provide services for another 10,000 illegals. At around $1,700 a head shipping illegals to a kinder gentler NYC would be a win for both Texas and the illegal alien invaders.

Missed opportunity … there was nothing for Adams to loose … but his ego has been served by his choice … and he’ll remain ignorant of the problems border states face.

Does your workplace have a side-gig hustler? One who’s onto every new get rich scheme? That’s Mayor Adams. Same vibe. Maybe it’s just me.

I don’t think anyone wants to voice it, but Adams is what you get when you vote in a subway turnstile enforcement officer who was not allowed to arrest anyone since Bloomberg was mayor. He is party boy, an unserious person more interested in the good life than anything else. He doesn’t have any more ability to run a large city than Biden or Lightfoot.

The DemonRats knows what is going on down in Texas. They are fully conscious of the damage they are doing to the southern border states and they don’t care, This is one of their twisted “greater good” prices the locals and ultimately the nation are paying and the fact that it happens to an “R” leaning state, well that’s all the better.
It’s NOTHING to do with empathy, but the D-Rats will cry crocodile tears. It’s ALWAYS about money and power.

There’s an old street and prison expression said when a big talker Adams is challenged, then backs down. It’s called “pulling someone’s tits out”.

Adams should have gone, because it would have made him a statesman, instead of showing him to be the street dummy he is.