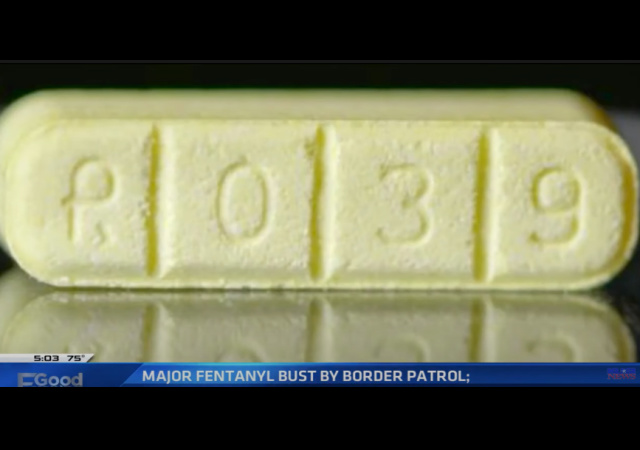 In July, Governor Greg Abbott announced a more than 1,000% increase in fentanyl since 2020. If you follow the social feeds of the Port Directors or reporters covering the border, it’s hard to miss this crisis. Last year 100,000 citizens died of opioid overdoses, and every state is hurting from this crisis.

On Thursday, a  “2-year-old was rushed to the hospital on Thursday after he ingested a fentanyl pill he found while playing at a Tacoma park” in Washington. CBP seized multiple pills of “fentanyl, enough to kill 50,200 people,” in Louisville, Kentucky.

The CBP found over 90,000 Fentanyl pills in Arizona and other drugs in a vehicle’s spare tire earlier Tuesday.

On Tuesday, CBP officers at the Nogales Port of Entry seized:
Over 90,000 Fentanyl pills
14 lbs Fentanyl powder
21 lbs Meth
2.5 lbs Heroin
Concealed within the spare tire of a vehicle. pic.twitter.com/PR218yMEhI

Later the same day, Port Director Michael W. Humphries of the Port of Nogales, Arizona, Tweeted that “CBP Officers at the Nogales Port of Entry seized more than 391,000 Fentanyl pills.”

Earlier today, CBP Officers at the Nogales Port of Entry seized more than 391,000 Fentanyl pills and 9.85 lbs of methamphetamines concealed in the doors and spare tire of a vehicle.

An excellent example of layered enforcement

Look what they found last week.

Over 22,000 fentanyl pills in the frame of a walker pushed by an adult male.

6,000 fentanyl pills hidden in the chest/groin areas of an adult female.

ANOTHER EXCELLENT SEIZURE ON SATURDAY

Concealed in the rocker panels of a vehicle. Great job detecting these deeply concealed drugs. pic.twitter.com/3KknUURRva

While Republican states are fighting the flow of fentanyl into their states, Democratic states are normalizing the behavior and releasing traffickers with little to no bond. This problem is not going away.

Use it to set up a George Floyd Fund.

Actually, it doesn’t matter what you call it. George Floyd and Fentanyl are synonymous.

Are they delivering it to Hunter?

Well, they can’t leave it at the border. There’s no room. All the shelves are filled with baby formula.

Some dealers lace heroin with cheaper powdered Fentanyl. My son died as a result.

Shooting dealers and smugglers with prejudice might reduce dealing and smuggling.

The should start by feeding it to the mules trying to smuggle it into the country under KamelToe’s watchful eye.

It is a real problem and has hurt a lot of lives. I am very sorry to hear about your son.

Look what we have in a President who by character of his son, turns a blind eye to habitual drug usage. Even now he is paying, perhaps not by money, but by leverage to keep him housed in a compound in Calif. and allowing him facetime when it throws a good light on him as “Joe Family Man”. Until we have a hard knock elected in office, be it Trump or De Santis, the border situation will continue to happen. It’s not just the drugs coming in, but the distribution network set up around the country with illegal migrants who are set up on the receiving and distribution locations across all our states by the dealers moving the drugs over the border. Until the border is closed and secured and actions taken in the courts to deport those who are aiding and abetting, the crisis will continue to grow exponentially in proportion to the number of those who are allowed papers to be in our country.

It’s going to a long 2 and 1/2 years until we have a new President who will deal with the multiple crises on the border.

I see it as a demand issue.

BIG MASSIVE JAILS with no access to drugs and the cartels go broke real fast.

Know many businesses that thrive when their top customers can’t buy?

No one has the balls to do this. That’s why the cartels are winning. Pump money into foster care and warehouse the addicts.