This is Our Shocked Face: California Fentanyl Suspects Don’t Show Up For Court After Release On Own Recognizance

This is Our Shocked Face: California Fentanyl Suspects Don’t Show Up For Court After Release On Own Recognizance

The officials set bail at $1 million due to the number of drugs. But then the county probation department’s risk assessment classified the men as “low risk.” 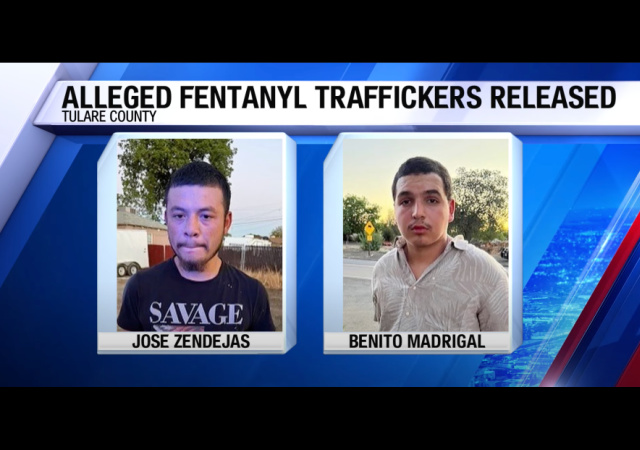 The suspect in the attack on GOP NY gubernatorial candidate Rep. Lee Zeldin was released on his own recognizance (ROR) despite being charged with second-degree attempted assault, a non-violent E-felony.

ROR is “a written promise signed by the defendant promising that they will show up for future court appearances and not engage in illegal activity while out on an ROR.”

New York is a blue state. So is California. People who don’t believe in harsh punishments for anyone, especially regarding bail, rule these states.

On January 24, California Highway Patrol officers pulled over a car with Jose Zendejas, 25, and Benito Madrigal, 19.

Both men are from Washington state. This is an important detail.

They found 150 packages. Each one had 1,000 fentanyl pills. They also found two kilograms of cocaine.

The officials set bail at $1 million due to the number of drugs. But then, the county probation department’s risk assessment classified the men as “low risk.”

Remember, these men are from Washington state.

After the classification, the suspects were released on their own recognizance.

You will never guess what happened!

The suspects did not show up for their court dates at the Tulare County Courthouse in central California. From Fox News:

Defendants Jose Zendejas, 25, and Benito Madrigal, 19 — released on their own recognizance less than 24 hours after their arrests with the large stash of illicit drugs — were scheduled to appear for their arraignments at the Tulare County Courthouse in central California on Thursday morning, but both men failed to show.

The judge called for Zendejas and Madrigal — both from Washington state — who were not in court, and the warrant for their arrest continues.

The judge withdrew the prior $2 million bond and directed each be held without bond if they pop up.

The sheriff and DA said no one consulted them on the decision:

Before Thursday, Tulare County Sheriff Mike Boudreaux said he did not expect the defendants to show up. He placed blame on the state’s soft-on-crime attitude and so-called criminal justice reform for a policy that allowed the two alleged drug traffickers to go free with nothing but a promise to come to court.

“I didn’t learn about the order until it was far too late,” Boudreaux previously told Fox News. “I couldn’t believe we had 150,00 fentanyl pills — one of the most dangerous epidemics facing our nation today — with people in custody that we may potentially be able to impact the future of this type of drug trafficking organization… and we let them go.”

“Although there is a need for a pre-trial release program, to do it covertly in the middle of the night in a very nontransparent matter is extremely dangerous,” Tulare County District Attorney Tim Ward told Fox News on Thursday outside the courthouse, referring to the court’s initial decision to release the defendants. “What we discovered here was that it was occurring based on a decision without any foundation of the facts of the case. And I think going forward, I think everyone is realizing that’s a mistake and should not continue.”

“The problem is once again the legislature and the state of California are trying to go down some social experiment born on the back of law-abiding citizens,” Ward said. “I go out on a limb and say that had these defendants been subject to the million bail that was in place when they were arrested, and they made bail based on that amount, they would have some skin in the game, some financial obligation and motivation to return to court.”

Went right back across the border.

The Left destroys everything it touches.

Probably the northern border – the one with Oregon. I doubt these guys have any fear of remaining in this country.
(Unless you meant going south to pick up more drugs. That’s entirely a possibility.)

Leftists are called “liberals” by many. In this case, it’s because they would like to to give criminals their liberties so crime can sprout liberally.

Bail and prison reform was sold to the public as a way to eliminate abuses and bureaucratic unfairness. Many of us urged caution and to closely monitor the final legislative language for overreach. The daily examples of how poorly the the results are being implemented are beginning to become intolerable even in blue progressive enclaves.

As H.L. Mencken observed ‘Democracy is the theory that the people know what they want and deserve to get it good and hard’.

Maybe if the people in these enlightened, progressive enclaves get it ‘good and hard’ often enough they will realize their error and vote the charlatans out of office. Then again, maybe not. On some level many people living in these blue utopian enclaves want to punished for some imagined sins of their own or that of their ancestors.

They identify as being present.

If you don’t think the state is involved with cartels then it must be really good stuff you’re smoking.

The cartels pay everyone off. Do you really think they are not paying California officials and federal agents? Are you stupid?

This really illustrates the night and day difference between red states and blue states. There was a recent drug bust in my very red state. The largest amount of fentanyl ever confiscated here.

The suspects were denied bail, and if past sentences are an indicator, the people involved will spend the next couple of decades in prison.

Now that is “restorative justice”.

Are these guys really from Washington state or is they just muling drugs and Washington is their last stop? Inquiring minds want to know.

They tunneled in from Mexico and surfaced somewhere near Starbucks at Pike Place Market. After freshening up in the men’s room without buying a latte, they set out to score some big drug money.

Seriously, I suspect Mary’s point is they testified they were from Washington during a state of California arrest/arraignment, where you’d think the authorities would have flagged them as a flight risk from the ‘long arm’ of California law/authorities. How does CA ‘extradite’ them if they return to WA, which was a given if they were ROR and not ordered to remain in the state?

I’m surprised such a sizeable bust was made by the CHiPs and prosecuted under state law (?) without brining in the feds. Seems awfully stupid to me.

not ordered to remain in the state?

An order not to leave the state isn’t a standard clause in CA ROR?

They probably had Washington state DLs which checked out. Kali overall may have gone over the cliff into the abyss of insanity but I doubt the CHP/TCSO would have just taken their word.

Karma dictates that at some point, they will misgender someone. THEN the book will be thrown at ’em.

Bottom line here is that the Leftists have made sure that crime of all kinds pays…. even killing people, where someone in CA was just let out after 6 years of a 50 year sentence. Therefore, we will get ever more of it, until the pendulum swings back in the other direction. It will be further aggravated by the poverty, crime, lack of education, and disease of illegals eventually delivered to every neighborhood by Brandon.

Depending on who invested the money in buying the pills, They may have also had bosses very displeased at them losing $750,000 in merchandise. Could be they never surface again.

I doubt it. If Benito and Jose had stolen the drugs and kept all the money for themselves then their bosses would be after them. On the other hand some of their mules will be caught by the cops. That’s just the cost of doing business. The higher ups know this.

But then, this is a highly unusual case. The usual method of shipping is the CCP smuggles it into Mexico. Then Hunter Biden flies down to Cabo and loads it onto Air Force 1. Then he takes the drugs to his room at the Roxy hotel in NYC and provides Ukranian hookers from all over the northeast with Amtrak tickets…

Hunter, like his dad Joe, loves trains. And by trains I mean ALL kinds of trains. Then the Ukrainian hookers distribute the fentanyl all over the country, send the money to Burisma, which puts Hunter on its board to launder his cut of the money. Then Joe sends billions in “military” and “economic aid” to Ukraine to thank them for the assist.