In one incident, 500,000 fentanyl pills were found during an Arizona traffic stop. 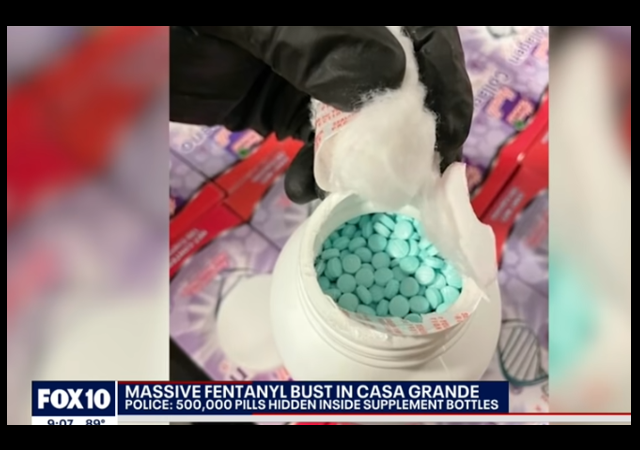 As bureaucrats and the media attempt to distract Americans with monkeypox and gun control, perhaps it is good to focus on a valid national health crisis: fentanyl overdoses.

As a reminder, over 100,000 citizens died of opioid overdoses last year.

Provisional data from CDC’s National Center for Health Statistics indicate that there were an estimated 100,306 drug overdose deaths in the United States during 12-month period ending in April 2021, an increase of 28.5% from the 78,056 deaths during the same period the year before.

The grim consequence is that more organs are now available for transplant from drug overdose victims. One doctor tied the overdoses to the pandemic lockdowns.

Dr Peter Lymberopoulos, from St George’s University in the Caribbean country of Grenada, who carried out the research, said the results were ‘surprising’ given how many operations were canceled.

He added that the 20 percent uptick from overdose victims was likely due to more people taking drugs to cope with economic and social pressures during lockdowns.

About 8,000 liver transplants are performed in the U.S. every year estimates suggest, for people who have suffered a failure of the organ — often due to infection from viruses, cancers and lifestyle factors such as being a heavy alcohol drinker.

It is safe to take livers from overdose patients because these are all tested for diseases before transfer, and cannot pass on any drug addiction. It is also the only organ capable of re-generating itself after damage.

As if all this isn’t dreadful enough, teenagers and young adults turn to social media to find Percocet, Xanax, and other pills, which are increasingly being laced with fentanyl.

Supplies of tainted pills, crudely pressed by Mexican cartels with chemicals from China and India, have escalated commensurately. Fentanyl, faster and cheaper to produce than heroin and 50 times as potent, made for a highly addictive filler. Last year, the federal Drug Enforcement Administration seized 20.4 million counterfeit pills, which experts estimate represent a small fraction of those produced. Its scientists say that about four out of 10 pills contain lethal doses of fentanyl.

The result is that new waves of customers are swiftly becoming addicted, said Dr. Nora Volkow, director of the National Institute on Drug Abuse. “When you are putting fentanyl in pills that are sold as benzodiazepines or for pain, you are reaching a new group of customers that you wouldn’t have if you were just selling fentanyl powder.”

How bad is the problem? Two women were recently arrested after cops found about 500,000 fentanyl pills in their SUV when they pulled over the women for speeding on Interstate 10 in Arizona. They were carrying the load with their children in the car.

The pills were found concealed in collagen supplement bottles on Monday during a search that also turned up a handgun and a large amount of cash, police from the small city of Casa Grande south of Phoenix said in a statement.

…In the Arizona traffic stop, Martha Lopez, 31, and Tania Luna Solis, 30, were arrested on suspicion of crimes including possession of a narcotic drug for sale, according to police.

Court records didn’t list attorneys who could comment on behalf Lopez or Solis, who are from Phoenix.

Two children in the vehicle were turned over to state child protection officials, police said.

Police executed search warrants on two rooms at the Candlewood Suites, and the search turned up 1,393 fentanyl pills, an ounce of crack cocaine, and smaller amounts of ecstasy and cocaine, according to an affidavit. Police also found seven cellphones, $2,039 in cash, and digital scales in the rooms, the affidavit states. Fentanyl pills are sold for $40 to $60 per pill, officials said.

Unfortunately, addressing this problem does not seem to prioritize much of today’s political leadership.

Several ODs a everyday in Minneapolis.

About time to seal China off from the world.
Blockade imports and exports.

Yep. China is a highly controlled communist criminal enterprise. Nothing, not one damn thing, leaves China without approval and participation by the state.

Yesterday I paused to remember that Fentanyl killed George FLoyd.

“As we grieve the children of Uvalde today, we should take time to recognize that two years have passed since the murder of George Floyd.” B. H. Obama

“As we grieve the children of Uvalde today, we should take time to recognize that two years have passed since the murder of George Floyd.” B. H. Obama

And those are his best qualities.

Is anyone holding gun to their heads to buy and consume?

I’m not a fan of the spill over costs of a generation or two of walking drug addicted zombies so honestly the only solution I see is to start holding individuals accountable for their own bad decisions.

Don’t want to spend 6 months locked inside of a dark shipping container crapping in a bucket? Then don’t do drugs.

Want to do drugs, fine- we’ve got a shipping container with your name on it. Die inside…. no one will miss you. That’s free will means.

Is anyone selling pills laced with fentanyl unknown to the buyer?
While I have always been in favor of drug legalization and still am, that is only with regulated drugs not made in a back room. It’s easy for a person to become a victim of fentanyl and not be an actual drug addict.

There are also those that become addicted on prescription pain relief because of injury, and when the pain relief is withdrawn succumb to the addiction.

Do you have any children? If so I hope yours are perfect and never make a mistake that kills them. But you’ll be fine with it, you won’t miss them.

George Floyd syndrome is a progressive condition induced by illicit drug use and social contagion. Roe, Roe, Roe yourself down the river Styx.

How much fentanyl is being shipped into the US through our non-existent Southern border? All this because Brandon refuses to exercise his Constitutional duty to faithfully excute the laws of the United States.

I’d imagine that pretty much all of the fentanyl entering the country at this point is entering through our nonexistent southern border. Along with all the meth, cocaine, marijuana. There is just no way that border patrol can deal with the drug cartels at this point. And they know it.

The best solution is to make it much harder for legitimate people actually in pain to get medication to help relieve some of the pain.

Sorry, but after all the education, movies, news reports, stories and assorted and prolific entreaties to not do drugs, I have no more sympathy left for junkies.
If they O.D., let em’ be. They knew the risk.

Junkies are creatures of habit and when they have to change dealers, either due to moving or their usual dealer being busted, they’ll pop or shoot up just as much of the new “product” as they are used to, without stopping to think that they should take it slow until they figure out how “pure” the new mix is. A common cause of accidental ODs.

There really isn’t anything society can do about it. Junkies dying is just a fact of life—or evolution in action.

OK guys. Being Colombian, this is a particularly sad subject, and have to say something.. The unwillingness of governments to fight drug trafficking full Monty is appalling. Among other things, because they profit from the drug trade on the side. See if you can follow the news on Alex Saab, the Syrian/Colombian that spent years funneling narco dollars from FARC to Hezbollah. Obama used the Muslim terrorists to fight his proxy war in Siria. In a recent trip to DC, the President of Colombia begged Biden to try to curb drug demand in the US. Biden’s intelligent response was:’ Well, don’t produce so much”. It shows the level of caring that he has for his people. Now it’s not only cocaine, it’s anything these teenagers can get their hands on. One final thought: Where are the parents? It ALL starts at home!