“Fentanyl does not derive from Texas or from the United States. It comes across the border from Mexico and it’s killing Texans. And it’s getting worse.” 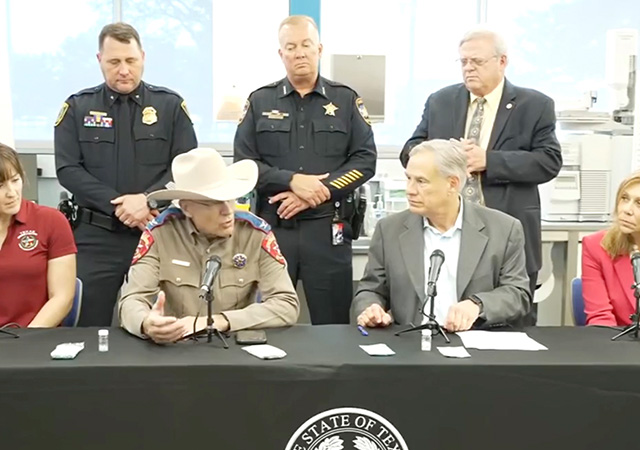 Governor Greg Abbott announced that in 2021, the state seized 964 lbs of fentanyl, which is a more than 1,000% increase from 2020. In a press conference on the fentanyl crisis held at a DPS crime lab in Houston, Abbott listed alarming stats that should have us all very worried.

In 2019 there were 277 fentanyl deaths. However, in 2021 there were almost 1700 deaths. Abbott said, “It’s because of Washington’s open border policies that deadly fentanyl is flooding (into) into the United States,”

Texas will not stand by as the federal government fails to do its job & protect Americans from this deadly drug. https://t.co/wK9PHXs0pW

The fentanyl crisis is a big deal. Everyone in America should be worried, especially if you live in Texas. “Fentanyl does not derive from Texas or from the United States. It comes across the border from Mexico and it’s killing Texans. And it’s getting worse.”

In a tour given to Fox DPS, Forensic Scientist Jennifer Hatch explains how dangerous this crisis is for America.

Last year, fentanyl was the number one cause of death among Americans 18 to 45 years-old, according to data by the Centers for Disease Control and Prevention.

Most of the time the drug is pressed into pill form. Though, authorities also confiscate kilos of fentanyl smuggled in from the border. Those large shipments also end up at the lab.

DPS says the kilo of fentanyl could produce up to 500,000 lethal doses. Which has the potential to kill hundreds of thousands of people.

Before the drug ends up at the lab, law enforcement has to find it. Which is not an easy task. Investigators say the Mexican Cartels hide it in everything from tires to water pumps. One of the people leading the charge to find the drug is Texas DPS Lt. Chris Olivarez.

“Every state is a border state because of what is taking place right now,” says Lt. Olivarez.

The Lieutenant is one of many leading the charge in Texas to stop the pounds of what he calls poison being shipped into the U.S. from China and Mexico.

Record amounts of fentanyl are being trafficked into TX because of President Biden's reckless open border policies.@TxDPS is finding nearly all street drugs laced with fentanyl in its Houston crime lab & enough deadly doses to kill almost every American. https://t.co/bv7IQmmugO

Abbott is hoping for help from the federal government, but until then, the Texas Operation Lone Star is fighting the battle in Texas.

As millions of deadly doses of fentanyl flood across the border, #OperationLoneStar is working 24/7 to protect our communities.

TX law enforcement is filling the dangerous gaps left by the federal government’s failure to secure the border.

Texas is not the only state seeing a rise in Fentanyl. Los Angeles announced they have seized 1 million fake pills containing fentanyl.

NEW: DEA Los Angeles announces a seizure of 1 million fake pills containing fentanyl in Inglewood, the largest fentanyl bust the DEA has ever made in CA. The pills are believed to be linked to traffickers associated w/ the Sinaloa cartel & were intended for distribution. @FoxNews pic.twitter.com/YpBFtq3JGO

Earlier this month, the First Lady of Florida, Casey DeSantis was at an event held in Gadsden County to announce a new messaging campaign to help residents learn the dangers of the drug.

The event was held in Gadsden County because eight people have died from fentanyl-related overdoses there in just five days.

“Too many individuals are losing their lives because of illicit drugs and substance abuse,” the First Lady said. “It is imperative that Floridians know the risks and understand that just two milligrams can be lethal.”

Obviously, this problem is not just in Texas, and it’s not slowing down. Hopefully, the federal government will help with border policies that can slow the flow of these dangerous pills killing America.

There are reasons not to embrace the “every state is a border state” meme.

The federal government defines a “reasonable distance” as 100 air miles from any external boundary of the U.S. So, combining this federal regulation and the federal law regarding warrantless vehicle searches, CBP claims authority to board a bus or train without a warrant anywhere within this 100-mile zone. Two-thirds of the U.S. population, or about 200 million people, reside within this expanded border region, according to the 2010 census. Most of the 10 largest cities in the U.S., such as New York City, Los Angeles, and Chicago, fall in this region. Some states, like Florida, lie entirely within this border band so their entire populations are impacted.

In a more alert and objective world, this is clearly a failure to uphold the laws of the United States and defend it’s citizens from enemies foreign and domestic, hence de facto grounds for impeachment of the president and all responsible cabinet members,
is it not?

There is much more evidence of “cartel collusion” in any given day than there ever was for Russian.

Sorry if I offend anyone here related to friends and relatives but I dont understand why anyone should care if these addicts off themselves through a bad fix?

You do offend people. Many people love those who have died and suffer greatly

Not even a little surprised old nutzo jumped in.

And when you have nothing to respond with, you just do downticks and upvote yourself…lol.

Believe it or not, I am sorry for you if someone you know died due to drug addiction. But that’s where it ends. It would be positively progressive of me to wax a bunch of fake outrage about it and demand that the TX state governor let freedoms be damned in a quest to separate addicts from their fix.

The only thing I want is border security, and the truth of the matter is that Texas has too big of a border and a leaky spot to the left in Cali to actually exhaust resources on the job that the Federal government is supposed to be doing instead. We all know that this huge increase in drug seizure is just a sign that more made it over that wasn’t seized. If that’s a black eye to highlight the Biden failures, then good but let’s not pretend like the drugs are in short supply otherwise or that the everyday politically apathetic American will make the connection.

Problem is, the fentanyl is also finding its way into party drugs, ADD drugs, who knows what.

Well, you probably offend a lot of people. Last year, in the U.S., overdoses involving fentanyl and other synthetic opioids surpassed 71,000, up 23% from the year before. Almost all of the fentanyl comes from China, then goes through Mexico and into the U.S. I’ve read estimates of 50,000+ deaths each year alone from fentanyl. China is literally killing over 50,000 Americans every year. If they were doing it with guns instead of fentanyl, we would have declared war by now.

And how many of those were forcefed overdoses? Probably a very small amount

You make an interesting point by bringing up gun violence. The conservative position with guns to which I ascribe is that the guns are not at fault and the law can’t stop violence and will only succeed in destroying freedom in the process.

So explain again why I should pretend to care more about this? I’m sorry for anyone who loses someone but it is a token sorry because from my distant perspective they just made bad choices. Plus, the addicts in particular, would likely make the same choice again had they survived.

Abbott is a fraud

you really need to come up with another shtick–if you dislike it here so much, go home to wisconsin

Are you sitting in the dark and heat while saying this?
Abbot misses the mark in a thousand ways. That he is marginally better than the worst governors isn’t much to crow about.
I see way to much “show” and very little action coming out of the state of Texas. What do you Texans say? All hat and no cattle.

Ah look, the downvote pussy’s fairy’s are afraid to engage. Come, tell us what Abbot has done that makes him anything special. We’ll wait…

“Hopefully, the federal government will help with border policies that can slow the flow of these dangerous pills killing America.”

The federal government is aiding and abetting the flow of deadly drugs from china into the USA.