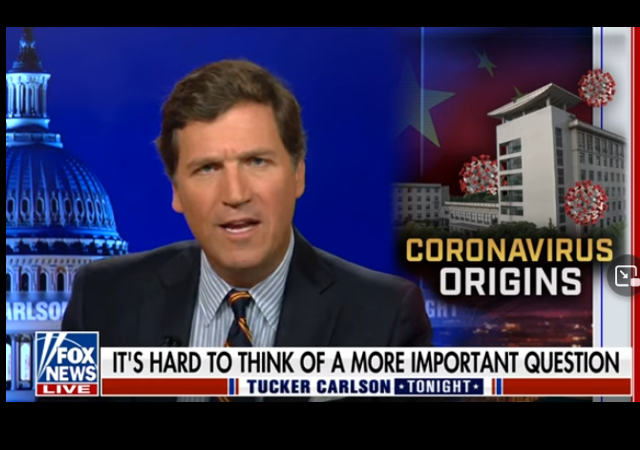 From the start of the covid pandemic to the present day, Legal Insurrection has been monitoring developments in the investigation of the origins of the SARS-Cov-2 virus.

I started in February of 2020, when I noted that Chinese university researchers believed virus may originate from government laboratory in Wuhan.

Other sign-posts on the road to reaching this sensible conclusion are:

Fox News host Tucker Carlson has also been following it. He consolidated the information into a gripping segment, which looked at the shift in the balance of power between China and the U.S.

He described the negative impact of the lockdowns on the United States, while in April of 2020, China was enjoying the highest GDP it had ever recorded.

“China’s economy was growing faster after the pandemic than it had been before the pandemic. And, as a result of that, China will soon overtake the United States as the world’s dominant economy…soon.

“If someone had predicted it to you ten years ago, you would have laughed. It would have seemed ridiculous. But that was before covid. Now it’s real, and covid made it possible.

“When you think about it that way, and that’s the way people who run governments think about it (trust us)…it becomes pretty obvious this was more than an over-hyped public health emergency.

“In fact, it very well could have been a crime…the greatest crime in history.”

Carlson also offered evidence that shows Biden uninterested in aggressively pursuing data gathered by intelligence agencies that point to the Wuhan Institute of Virology’s labs as the point source for the virus. He referenced the sale of the oil from the Strategic Petroleum Reserve to a Chinese firm with connections to Hunter Biden.

Carlson  did a detailed review of the media campaign against anyone who connected the virus to China as “racist.” The timing of the surge of these smears exactly corresponds to the time that Chinese social media began making these assertions.

The Fox News host also  reviewed the science related to the virus. He pointed to an exchange between Dr. Anthony Fauci and another scientists that suggests the suppression of information about a potential lab origin that I had reported last year.

So Fauci asserts he couldn’t possibly have known the coronavirus was a gain-of-function, bioengineered virus. You know, despite the fact a Feb. 1, 2020 email that he sent to NIH Principal Deputy Director Hugh Auchincloss had an attachment labeled “Baric, Shi et al – Nature medicine – SARS Gain of function.pdf” and the subject line, “IMPORTANT.”

Fauci’s message had a tone of urgency, saying, “Hugh: It is essential that we speak this AM. Keep your cell phone on. I have a conference call at 7:45 AM with [Health and Human Services Secretary Alex] Azar. It likely will be over at 8:45 AM. Read this paper as well as the e-mail that I will forward to you now. You will have tasks today that must be done. Thanks, Tony.” Fauci sent the same attachment to Lawrence Tabak, the principal deputy director and deputy ethics counselor at NIH, with the subject line “FW: IMPORTANT” and the message, “Here it is.”

Carlson wraps the segment up with a reference to China’s monkeypox research.

The full episode is chilling and a great reminder as to why U.S. officials and responsible members of the press should not hinder the search for answers on the pandemic’s origins.

Tucker didn’t go back far enough.
Gain of function research was FORBIDDEN during the Obama administration. (Whether by law or by EO I do not personally know.)
Fauci and company EVADED the prohibition by sourcing it out to Red China and paying them to perform it.
Then when the Three Stooges fucked up the job and let it loose, he performed a massive coverup, suborning scientists worldwide to cover up his part in the affair.
Fauci is guilty of GENOCIDE. He must be punished accordingly.

The Chinese closed the borders to Wuhan province in order to protect the rest of the country from Covid, but kept the airliners flying from Wuhan to the rest of the world I’m order to ensure the virus’ spread. This be proves that they attacked us and the rest of the world with coronavirus. supporting this is the )30 million yearly bribe the Chinese pay to Biden. The virus gave their boy, Biden, a chance to defeat President Trump who was opposing China.

What’s the big deal about coronavirus?

How in the world did that happen? Biden promised he would shut down the virus, not shutdown the country.

The UN has it’s Biological Warfare Convention so you know they’ll get right to the source.

And if and when they take back control, the RINOs under Bitch McConnell aren’t even PRETENDING that they’re going to do a single thing to investigate it.

I always called it the China virus.. always

My preference was “Wuflu”. Still is.

A smoking gun, among many, many, IMO is the rapid change from “Chinese coronavirus” to “COVID”, which occurred when the Chinese told us to change it. Who is in charge?

Actually, the term that was most commonly circulating (other than Trump) was Wuhan Coronavirus.

Covid19 was human engineered. And, the Omicron variant was engineered separately. It did not evolve from the original virus.

Omicron was deliberately released as a cheap shot at building natural Immunity.

Why do you want links to dead people?

Because it’s from China!

And that’s why we need Trump

And the destruction of the globalist

I agree it’s the biggest crime in history at least since the WWII, with global deaths, costs in lockdown to economy and the ongoing forced experiment drugs onto the population including children.

It hurt every country but China.

And forgot you will never see anything against China by Sundowner. They own him by millions given to the Bidens.

They own plenty of US politicians, from local all the way to the houses of congress. I am sure – judging them by their character – plenty of Republicans are at that trough.

It’s taken them two years to come to the same conclusion many of us reached within months. They had to first overcome their bias against blaming the lab and when there was no other obvious conclusion, they pulled their heads out of their collective ass,

Other scientists knew within a week, but they were not allowed to speak. To be more specific, 6 scientists from India publish a paper in February of 2020 that stated that covid-19 had HIV. They later withdrew the paper. At the time, I put the link on LI.

“I have rules I live by. The first is that I don’t believe anything my government tells me.” …G. Carlin

The fact that the “official sources” so vehemently denied any connection to the Wuhan Institute is prima facia evidence that it is worth looking into.

These people cannot tell the truth.

I have a hard time believing “accidental” wasn’t actually “intentional”.

We’re starting to discover about a trillion of that was stolen and grifted.

Loss of containment is quite probable in this scenario….especially when you are talking about mindless drones that toil under an oppressive regime that does not reward creativity or innovative thinking.

I still haven’t seen any evidence that it was intentional and doubt it to be true. China’s economy is far too dependent on the world economy for trade, and disrupting that has hurt their economic functions as much as anyone.

1. Why was the US govt even tangentially involved in this sort of dangerous research and why did they attempt to hide then downplay that? Who benefits from refusing to be fully transparent about this?

2. The Chinese govt actions in the wake were completely irresponsible. They knew and didn’t fully inform the world what was coming. They still refuse any transparency or openness to determine exactly what was was going on in their labs.

Evidence? The greatest theft and destruction in history was clearly planned. The bastards couldn’t defeat Trump and they were afraid to assassinate him, so they teed up the chinaVirus. They knew all about it since they paid the bills to develop it at the wuhan lab.

Of course they released it purposely.

Use your brain and quit pretending they wouldn’t do something like this. They would and they did. They will commit any atrocity to maintain power and they have numerous allies including the chinese communists.

I think the lockdowns and stimulus were the biggest crimes in history. An accidental lab leak is not.

The jury and my tinfoil hat are still both out on “accidental.” I could go either way.
There’s still the little matter of Gates predicting the pandemic down to the year, and all the attention paid to gaming responses against a novel coronavirus in the two years prior.

I wonder what happened to the Chinese authors who first wrote about the possibility of a lab leak, and if it is known in the public record.

There was a whistleblower doctor who unfortunately “died of COVID” shortly thereafter. This was when we had been told that the virus couldn’t infect humans in late 2019.

Carlson is way off in predicting the China will soon overtake the US economically. China’s economy is in a free-fall meltdown. Even their slave labor is not enough. Their key infrastructure is a shambles, especially their electricity production capacity as their new super dams have been revealed to of shoddy construction and at risk of failure. So they are once again accelerating their dependency on coal.

All we have to do to make them collapse is to get the hopelessly compromised Bidens and cronies out of the White House and Congress. Then we can rid ourselves of the Chinese parasite and regain our footing with MAGA.

I am praying that we have a Nuremberg-style prosecution of all of these globalist traitors. Our government just announced that we are no longer interested in catching Chinese spies! So we are probably talking about many thousands of Americans alone. That’s a lot of hangings.

TY Phil, I really appreciate your optimism.. but the issue I have is the word prosecution. The legal system is gone, I don’t believe that will ever happen. We can’t even charge protesters with marching at Scotus’ homes. Maybe gone is a bit of an exaggeration, but it sure seems to be in a coma somewhere.

I think as the (alleged) justice system collapses, that street justice will enter the picture. As long as ropes and lamp posts exist, it is possible. MY dream is to see a few (or a lot) of these people swinging from lamp posts by their necks. Or, by their ankles while the crowd bats at them like they are pinatas.

China is the largest global supplier of the active ingredients and chemical building blocks needed to make many prescription drugs, over the counter products, and vitamins. The Food and Drug Administration (FDA) is inspecting only a small number of the Chinese companies that manufacture U.S. drugs, and those it does inspect are often found to have serious health violations. Meanwhile, the drugs that are making their way into the United States from China, either as finished products or as ingredients, are often falling far below U.S. safety standards. And some of these drugs are not being inspected at all. Ever wonder how many people who have the China WuFlu created coronavirus (19th version) similar to the flu, took their flu shots which was manufactured with Chinese ingredients? China’s secret ploy to weaken its enemies? The “success” of the People’s Liberation Army’s first-generation, bio-based warfare agent, COVID-19, has only accelerated China’s military ambitions. China probably created a backdoor in Covid vaccines that require a revolving need for repeated shots until it kills you!