“More than 5 million barrels of oil that were part of a historic U.S. emergency reserves release to lower domestic fuel prices were exported to Europe and Asia last month”

At a time when millions of Americans are struggling to pay historically high gas prices, our government is shipping millions of barrels of oil from our strategic reserves to other countries.

Joe Biden refuses to budge on his anti-energy creation policies and at the same time is sending our reserves overseas? This is madness.

More than 5 million barrels of oil that were part of a historic U.S. emergency reserves release to lower domestic fuel prices were exported to Europe and Asia last month, according to data and sources, even as U.S. gasoline and diesel prices hit record highs.

The export of crude and fuel is blunting the impact of the moves by U.S. President Joe Biden to lower record pump prices. Biden on Saturday renewed a call for gasoline suppliers to cut their prices, drawing criticism from Amazon founder Jeff Bezos.

About 1 million barrels per day is being released from the Strategic Petroleum Reserve (SPR) through October. The flow is draining the SPR, which last month fell to the lowest since 1986. U.S. crude futures are above $100 per barrel and gasoline and diesel prices above $5 a gallon in one-fifth of the nation. U.S. officials have said oil prices could be higher if the SPR had not been tapped.

The U.S. oil reserve is not Biden’s to use whenever he thinks it will help him politically. This is an A.F. Branco cartoon come to life: 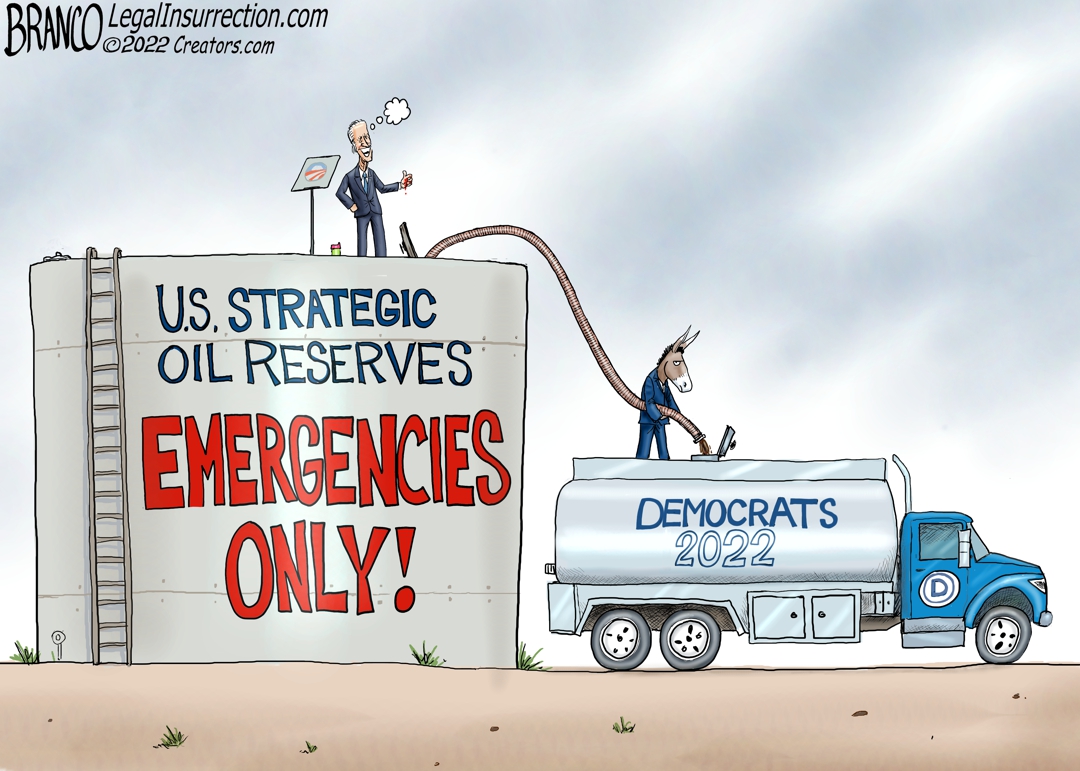 Just yesterday, a new Monmouth Poll found that gas prices are a top issue for Americans:

The number of Americans who are financially struggling has increased by double digits in the past year as inflation and gas prices top the list of problems faced by the nation’s families. The Monmouth (“Mon-muth”) University Poll finds a majority say the federal government’s actions are hurting them and that President Joe Biden’s policies are not benefitting the middle class. Preference for party control of Congress remains divided, with no real movement since the spring…

Nearly half of the public names either inflation (33%) or gas prices (15%) as the biggest concern facing their family right now. The economy in general (9%) and paying everyday bills (6%) are among other financial concerns mentioned.

Sending our oil reserves overseas makes absolutely no sense. What are we going to do next, arm the Taliban? Oh, wait.

Exactly as predicted. They’re just using it to line their pockets. They knew goddamn well it was never going to meaningfully affect the final price of gas.

This was always just a bullshit PR move like the planes of baby formula.

One of the missing elements in this gas price hike is refining capacity, which is plainly inadequate. Part of the reason why the US has inadequate refining capacity is that it takes decades to amortize an oil refinery that makes gas for cars. To boost production by a million barrels, takes a year of construction and 10 years of profits to pay off. Unless Biden provides an exception to his rule all “fossil fuel” refining capacity must end by 2030, Shell, Chevron, et al. aren’t building refineries, and they’re running at maximum capacity now.

This is a surprise how. It was reported rhe first time oil wa released, the reason given was it was high in sulfur.

Lots of good reasons, e.g. it’s cheaper to export and import replacement on the other coast than to transport, the shortage is refinery capacity not oil so it’s replaced by refined products, etc. In itself you can’t tell what’s going on.

And what has Biden done to help refinery capacity? And where is that oil on the other coast coming from?

And do you have any data to back up the claim that we are replacing the oil in the strategic reserve and not depleting it?

I’m claiming we replace what’s exported with something imported, nothing about the strategic reserve.

You can claim anything you’d like, no matter how wrong, but the point is that he’s draining the SPR, leaving us potentially weaker in the face of an emergency.

So not to pile on you but here’s what we have as fact…America is not even producing enough oil, so we are exporting from emergency reserves. That’s undisputed fact. Anything else is conjecture that would require substantiation.

Always American last with this bunch

The foolishness of draining the SPR might be the easiest analogy for our Nation.

Wise leaders before us built a system of govt and commerce over two and half centuries that served us very well, creating an economic powerhouse safe for the most part behind the Oceans.

Today many of our leaders are no longer focused on building our Nation up but instead on tearing it down, with a few attempts at maintaining thrown in. These people seem hell bent on draining the last remainder of strength, vitality, tradition and common sense from our Nation.

Fortunately the tide has begun to turn. Average Citizens have caught on to the games of graft, grift, nepotism and purposeful destruction in DC and some State Capitals. A genuine populist coalition has been growing in strength to select different leaders who don’t simply feign interest at election time but are committed patriots.

Is it any surprise? Pedo Pervert Joe shits on ordinary Americans every chance he gets.

We’ve had so many previous Democrat presidents whose grafts were clever and innovative.

Now we have Joe Biden, who grafts on the Amazon Basics model. Ham-handed, meat-axe graft, across the board, you can do whatever else you want as long as the Big Guy gets 10%.

He’s deliberately weakening the country. It may be madness, but it’s also treason.

Other than the gross hypocrisy in sending US oil overseas during an energy crisis what bothers me is that the SPR oil was already paid for by our taxes. So is Biden giving it away or selling it?

OK, I did some research and the answer is muddier than I thought. Can anyone figure out WTF we are doing here and why?

Summary of 50 Million Barrel Release from the Strategic Petroleum Reserve

Not that it matters. In truth, everything the US sends overseas to benefit other countries is paid for by our taxes.

Even if we are selling it how are taxpayers being rewarded for their forced investment in the reserve?

For the last year plus a bit, refineries have been put under the regulatory hammer. Capacity has been capped and new construction restricted until even if you flooded the entire US in oil, there still would not be enough gas to bring prices down substantially. So rather than relax the garrote they’re holding against refineries, the current administration has happily sold a good chunk of the national emergency reserve to foreign refineries (and passed a great deal of that money through the (cough) right hands in the process).

There’s no graft to be had in letting more refinery capacity online. There’s lots of graft involved in selling oil. Just talk to the Dems who were hip-deep in Saddam’s Oil for Food program.

strategic reserves are a huge part of our national defense. WTF?!? And to ship it overseas? This moron needs to go.

According to the American Energy Alliance 5 million barrels were bought by the Chinese and went into their SPR, thus eliminating any reduction in pricing for oil. But I suppose Hunter will get a few percent of that windfall.

That’s in addition to the oil that China is buying from Russia (as is India). They’re not only NOT selling less oil, they may well be selling more – at inflated global prices.

The big guy is getting a taste. Wait for it.