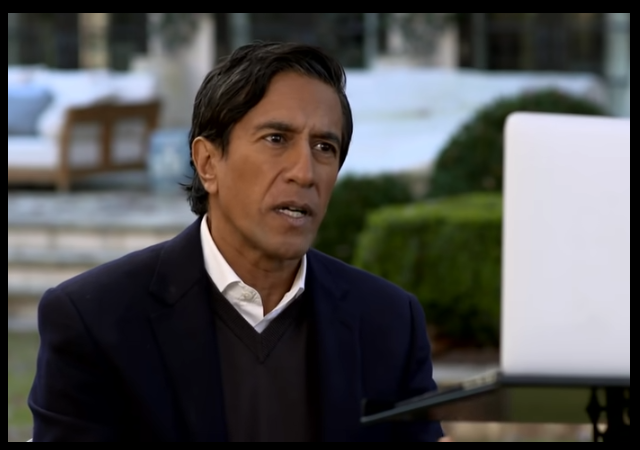 In late March, I blogged that former CDC Director Robert Redfield asserted that COVID-19 likely came from a laboratory in Wuhan, China: “I’m of the point of view that I still think the most likely etiology of this pathology in Wuhan was from a laboratory — escaped.”

Last month, Redfield opened up in an interview with Gupta for a CNN special, saying he believes an accident at the Wuhan Institute of Virology is the ‘most likely’ origin for the coronavirus pandemic.

CNN commentators sneered at Redfield’s opinion, with the network in one tweet insisting there was ‘a lack of clear evidence’ for the lab escape theory, but Gupta backed Redfield up in an interview published on Thursday.

‘He’s an experienced virologist. He was also head of the CDC at the time this was happening, which means that in addition to everything that we know, he had access to raw data and raw intelligence that was coming out of China,’ Gupta told Mediate’s The Interview podcast.

Dr. Gupta stressed that Redfield‘s opinion was an “informed” one that could be supported “just from an Occam’s razor standpoint.”

“My point is that it’s a much more informed sort of thing for him to be saying than for anybody who may have expertise in virology, because he has a lot more knowledge and information that he has that maybe he can’t share, but is informing his opinion,” he said, adding, “It’s still an opinion.”

Dr. Gupta said he gave Dr. Redfield multiple opportunities during the March 26 interview to clarify his remarks, but that he “really was quite adamant that this was the origin of the virus.”

“I was not as shocked by what he said as the fact that he said it,” Dr. Gupta said. “There’s reason to suspect that this is the origin of the virus. It’s a big virology lab right in Wuhan that happened to be studying bat coronaviruses. Just from an Occam’s razor standpoint, finding the simplest explanation, it would make sense.”

I will note that CNN may have been ahead of the curve if it paid attention to our February 2020 post: Chinese university researchers believe virus may originate from government laboratory.

You can find a link to the podcast via Mediate for those who wish to hear Gupta’s interview.

Meanwhile, in China, officials admit the weakness of Chinese coronavirus vaccines, and the communist government is considering mixing them to get a boost.

Chinese vaccines “don’t have very high protection rates,” said the director of the China Centers for Disease Control, Gao Fu, at a conference Saturday in the southwestern city of Chengdu.

Beijing has distributed hundreds of millions of doses abroad while trying to promote doubt about the effectiveness of the Pfizer-BioNTech vaccine made using the previously experimental messenger RNA, or mRNA, process.

“It’s now under formal consideration whether we should use different vaccines from different technical lines for the immunization process,” Gao said.

Legal Insurrection readers who have been following our coverage discussion the success of “Operation Warp Speed” would not have been surprised at that news, either. In March, we noted that China’s Sinovac product was reported only to be 50% effective.

All the experts agree: China’s science is bad, and its medicines worse.

He agrees with Trump. = His days are numbered at CNN.

I don’t think there is any doubt that it came from the Wuhan lab. Furthermore, I think it was likely intentional, CCP’s response added much to support intentional, and even if the release was not intentional, their subsequent actions make it look like extreme depraved indifference on their part. CCP actions are damning, to say the least.

Just an aside but I misread CCP (Chinese Communist Party) as CCCP which is what the Soviet Union’s name is in Russian and had to do a double take.

If Redfield right, China was able to contain the virus after the initial outbreak. The rest of the world, because China hid the info, not so lucky.

Not to mention that while they had Wuhan locked down, isolated, and quarantined from the rest of China the Chinese Commies were letting international flights fly in and out of Wuhan.

An objective observer might consider the possibility that was a deliberate attempt to spread it to the rest of the world.

Except it still isn’t controlled in China.
They are still fighting outbreaks, in spite of having a totalitarian government that has to obey no laws.

Does Sanjay Gupta stand for anything at all? This is the same hack that read Cuomo’s clear chest x-ray as awful. He’s a total waste of space on tv, and he is the epitome of liberal forced “diversity” because he’s about as vanilla white, plain, and gutless on every take he’s ever made while having one different attribute: darker skin.

Sorry, but I think you should change the headline to Sanjay Gupta blowing with the wind is another sign that COVID’s origins are likely from a Chinese lab.

All the experts agree: China’s science is bad, and its medicines worse.

If the CCP can’t steal information fromWestern researchers or technology from Western companies then they really can’t compete on the world scene. But anyone with half a brain has known that for a long time.

Good, consistent science is possible when all “truth” has to be passed through a political filter first.

Science is just one of those collateral damages, once 2+2 starts equalling 5.

Escaped from? Or released from?

Either way… it was then intentionally released to the rest of the world. What will “The Big Guy” do now at 1600 Penn basement? Well… nothing.

He and his BlueAnon apparatchiks will ‘pounce’ and leap to the defense of their fellow commies by calling us conspiracy theorists.

I think escaped. They had a choice of releasing it anywhere in the world, and picked the fresh market right by one of their virology labs that just happened to be working on bat coronaviruses just like this one? The Han Chinese may be arrogant, but are far from stupid.

On the flip side, they are notoriously slap dash about their safety protocols. I don’t think the problem is that they are Chinese, but rather that they live in a communist country. Likely the same sort of thing that resulted in the Chernobyl meltdown.

On the other hand, the timing could not have been better for the Chinese commies and their American allies — the Democrats and big corporations in bed with the ChiComs. It enabled them to get rid of their single greatest enemy and obstacle to their plans. Trump.

My personal opinion based on intuition (no evidence) – the CCP was developing the virus to unleash in the USA during the 2020 campaign season, and it accidentally got out 6-10 months early in their own country instead. The top Democrats and their Media overlords knew in advance of course, and were fully prepared to exploit the situation.

Is that allowed on CNN?

Escaped from a lab in China? Would that be the new BSL-4 lab at the Wuhan Institute of Virology. You know, the new top security BSL-4 lab built and operated and funded with the assistance of Fauci, US NIH, and the Obama Administration? And pre-loaded by the purchase of SARS-CoV-2 virus from UNC-Chapel Hill, sold to the Chinese by Dr. Fauci himself? That lab? Why not mention these details in the article? These are important facts that keep getting omitted from the “conversation.” (Ref.: Dr Francis Boyle, interviews on Banned dot Video; and Josh Rogin, Chaos Under Heaven).

Coronaviruses aren’t handled at BSL-4, so that lab is a red herring. It probably came from a BSL-3 lab in the same complex.

IMO, it came from the lab as Gupta stated that makes the most sense given all the info.

The question is was the release intentional? IMO, no, just someone not following the protocols; it happens. To me the most important question is not where it came from or how it escaped.

The true question is; what did the government of China do? They withheld information from the world until this virus was loose. They are.still refusing access to lab workers and to the raw data.

This tells me that while they may not have intentionally unleashed it, they certainly tried to exploit the situation rather than simply come clean that an infectious virus was loose.

Their ongoing efforts to garner political and propaganda victories by sending PME and vaccine to Europe, Africa and elsewhere reveal this. Especially considering it was substandard at best.

The CCP exploited the virus for its benefit – just as the Democratic Party and its Media Overlords exploited it to win the 2020 election.

So, now it’s OK to call it the Four Seasons Fru

I’m so old I remember when it was racist to say that the virus escaped from the Wuhan lab.

I’ve long believed that C19 either escaped or was deliberately released from a Chinese lab. As for the wet market theory, I’ve long thought it all wet. The number of Westerners who have live in the Far East and passed through wet markets without any bad symptoms is legion; and, in any case, Wuhan is not famous for eating anything too terrible exotic (that honor goes to Guangdong and Guangxi).

As for Sanjay Gupta, I’ll give these scientists and physicians the benefit of the doubt. I respect that they do their best with the methods they have, but also accept that they’re as fallible in their own way as the rest of us. They’re building the plane while flying it, as many others have been doing over the past year.

There was a YouTube video of a European living in China who went to various Chinese web sites early in the pandemic. His reading of things was that there had been experiments at the Wuhan Center Of Disease Control that had resulted in some accidents. One in 2018 had killed one and injured two. There appeared to be some indications that another accident had occurred there.

Duh. It obviously came from WIV, and was obvious from day one. An outbreak of a coronavirus in the city that has the world center of coronavirus research while the source of the bats is 1000 miles away? Too much of a coincidence to be anything else. The real question for me is what was the Wuhan Institute of Virology doing with this virus when it escaped? What kind of program was funding the work and what were the program goals? What manipulations had been done to the virus that escaped, and its sisters that didn’t? It would be really nice if some WIV scientist defects from China and leaks copies of lab notebooks, classified research reports and proposals onto the internet.