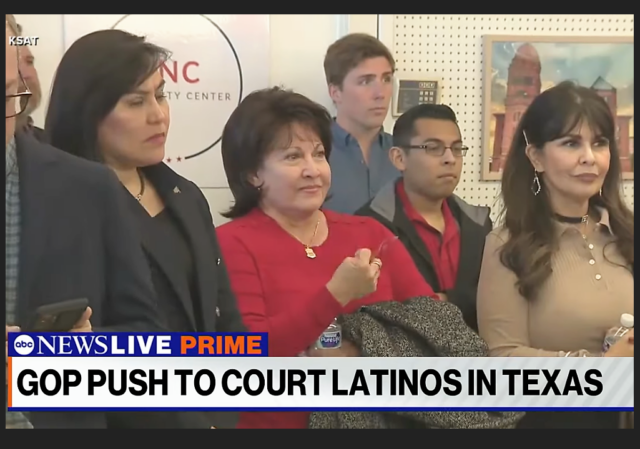 My oh my. The Democrats had a plan. They called it “Demography is Destiny,” Democrats were going to ride race and ethnicity to permanent power, to pidgeon-hole Republicans as the party of the shrinking elite whites.

A funny thing happened on the way to the Democrats great replacement theory — Democrats became the party of elite — and woke — whites. The party of Karen.

We’ve seen plenty of evidence of a realignment. Trump received a higher percentage of Latino votes than any prior Republican nominee. Non-white Republican candidates, particularly women, are rising stars. Democrats are so worried that their media outlets are stoking fear of Republican “Far-Right Latinas.”

We’ve documented this trend, so it will not come as a surprise to Legal Insurrection readers:

Josh Kraushaar at Axios reports on this Great Realignment:

Shifts in the demographics of the two parties’ supporters — taking place before our eyes — are arguably the biggest political story of our time.

Why it matters: Democrats’ hopes for retaining power rest on nonwhite voters remaining a reliable part of the party’s coalition. Democrats’ theory of the case collapses if Republicans make even incremental gains with those voters.

Here are some of the details leading Kraushaar to this conclusion, particularly a collapse of support for Democrats among Latinos:

What the data show: Democrats are statistically tied with Republicans among Hispanics on the generic congressional ballot, according to a New York Times-Siena College poll out this week. Dems held a 47-point edge with Hispanics during the 2018 midterms.

If Demography Still Is Destiny, then Democrats are on the wrong side of history.

Elite in the sense of woke, thus signalling separating themselves from the common sense mobs.

Elite in the sense of rich doctors and lawyers wanting the Democrats to pay off their student loans.

If you don’t vote Democrat you really ain’t Latinx.

That is what CNN says, they aren’t the “real deal” unless they’re socialists.

If we can get all the tacos, fortune cookies, and grits to vote Republican maybe we can kill wokism.

Any hope for the bagels?

I forgot the bagels!

I’m a Torah-observant bagel. Nearly all of us vote our values which is conservative which means voting Republican (not necessarily sharing all our values but sharing our values more than the Democrat party). Those who take Judaism seriously vote I would guess 90% Republican. Those for whom Judaism is a flavor of liberalism obviously vote liberal. But these are largely people who were never exposed to Judaism in a serious way. Additionally, sadly, the intermarriage rate in that group is enormous and they are largely disappearing from Judaism. I think the Pew study said that Jews in America will be largely Orthodox (Torah-observant) in a few generations.

The secular and heterdox Jewish movements are full tilt woke and have substituted social justice in lieu of any connection to authentic Jewish tradition and are unable to transmit any Jewish values to the next generation. The Orthodox community, where family community and education are paramount values, is clearly far more socially and politically conservative and views the Democratic Party as having lurched very far to the woke left on all issues and is not fooled by a Party that has openly anti Semitic members of Congress known as the Squad as part of its caucus

In reply to krb

I want to thank you for that post. It was very uplifting. I will take that and save and read it again on a rainy day.

I refer, of course, to the first half of your comment. The last half makes me sad.

KRB, I wish it were 90%. But there is a whole sector of the Orthodox community associated with Yeshiva University that is sold, lock stock and barrel, to the Democrat Party. These are the ones who make feeble arguments for why abortion should remain legal, and why in any case it’s not our business to promote morality for gentiles, who promote welfare and higher taxes and support restrictions on gun rights. They are Orthodox because they obey Jewish law, but their culture and attitudes are not Jewish; I often refer to them as “Protestants”, because their outlook on the world reminds me of them.

Nobody is Latinx, according to the actual Hispanic community…

Maybe they meant “kleenex”. You know, Freudian slip: both are disposable to the left.

Fair enough since I don’t know anyone who wants to be Latinx.

There was a clue this could happen in the mid-90’s when George W Bush won more than 40% of the Hispanic vote for Governor. That campaign helped turn Texas into a solid Republican state for the first time ever. The fact that the GOP failed to learn any lesson from that for over 20 years is astounding.

They ‘learned’ that they had to get on board with the RINO amnesty insanity to ‘appeal’ to them.

Which was idiocy. Actual hispanic voters DO NOT WANT more illegals, its importing every bad part of the countries that they left.

Trump finally gave them what they ACTUALLY wanted – stop the flood of illegals, and give them an economy to succeed in.

Trump is wildly popular with the “morning tacos”.

Enjoy the irony of these two headlines, appearing one immediately after the other in today’s LI’s RSS feed:

Chair of Higher Ed at U. Denver Says ‘Commit to Realizing the Death of Whiteness’

I don’t know why this has to be brought up all the time but in 2011 Thomas B Edsal wrote a collum explaining how the left had abandoned the working class in favor of a coalition to keep them in power.

We must not let the significance of the Great Realignment be lost with the passage of time.

Our diverse working class simply needs to get to go and needs to be able to get where they need to go to do the work and get home. This is exactly why the Democrats will and must expand access to necessary things such as access to abortion and vaccine updates in order that these critical things can have the necessary transportation to and from in order to maintain their significance and importance in our daily lives.

Seriously, we are taking the people seriously because the people take themselves seriously and that has forced us to review the seriousness of the significance of the issues affecting our diverse working class.

We fully believe…. we fully know that the truth is on our side and we will continue to make sure there is always adequate transportation for abortions and vaccinations to keep the masses healthy so they can live to enjoy the protections from gun violence brought to us by the Republicans and the Courts. We rightly believe these certain issues are now fully settled.

She is and remains a dumb slut.

Left wing politicians usually don’t have to live in the messes they make. When woke DAs and bail funds destroy urban communities by favoring criminals over polite society, they aren’t the ones whose families risk further victimization. They will harp on how non-whites are disproportionately affected by the criminal justice system, but don’t seem to acknowledge that those same groups are more likely to be victims of crime. Woke policy actively endangers the groups they claim to protect! It’s almost like it’s a scam or something

“Wokeism” ( by any other name) is a deliberate and calculated strategy and tenet of Marxism designed to create and foster a continuous division emotionally driven by whatever class is necessary ( race, wealth, social status or any combination as the situation dictates).

There’s no thought given or even required for its usage because its not designed to address or “fix” anything- its designed to CREATE PROBLEMS, not solve any.

Its a control technique to keep people from ever banding together and becoming strong.

Yeah, almost all the current tribalism reflects the seeding of divisions from Soviet era bs designed to divide, destabilize and weaken the west. Class, ethnicity, race, whatever all were used as a lever to power.

Just because the hucksters on the grievance grift cynically profit from DEI, CRT/equity, sue and settle civil rights claims and guilt ridden payoffs from the gullible it doesn’t mean that aren’t true believers who long ago drank the koolaid. Some of them from their Mother’s milk. These true believers, some of whom are now in positions of power, are a much bigger danger than any grifting huckster.

This was bound to happen as the Democrats went for high dollar contributions. Working stiffs don’t write maximum checks to political candidates. So the Democrats became the party of big money and represent the interests of affluent voters. And one thing affluent suburbanites, particularly those with teenage daughters, want is easy, no-fuss abortion on demand.

Hey, people! You are not tacos! You are hard working citizens that care about family. You have a work ethic and your family values are conservative. You should not be voting Democrat—Ever. Ever. Ever.

Maybe now the Leftists will take an interest in securing border.

Diversity of individuals, minority of one. Principles matter. Welcome my fellow Americans.

If you don’t vote for the pedophile-in-chief and his retards, then you ain’t really a taco.

All tacos are not the same. There are hard shell tacos and soft tacos, etc. You can’t judge a taco by it’s tortilla.

This is how the Democrat party thinks about “Latinx” or “Breakfast Tacos” and Black voters … “they” are “our” property. https://t.co/VMTIlyBjgR

Why do you people insist on using the language of the left? You fall into the same trap over and over.

Not the “Republicans are sneaking around building coalitions while things just happen for the Democrats”…projection…reverse.

Republicans are becoming a multiracial coalition of working-class voters, with inflation as an accelerant.

I don’t give Republicans any credit for building any coalition. This is happening in spite of their incompetence as a party simply because the Dems are becoming more and more toxic to said voters.

Realignments are always a double edged sword. You gain some and you lose some. And if you gain and lose in the wrong districts- depending on how they were gerrymandered, you could take a net loss. The Democrats gaining with affluent Whites could flip a lot of suburban districts (D). And the loss of Affluent women, Chamber of Commerce types, and Country Club Republicans (who are very upset over Dobbs) could crush GOP fundraising for a very long time.