My friend: “Latino is literally all-inclusive. To change it to Latinx is not only counter-intuitive to the language, but offensive in trying to make a Spanish word fit English norms.” 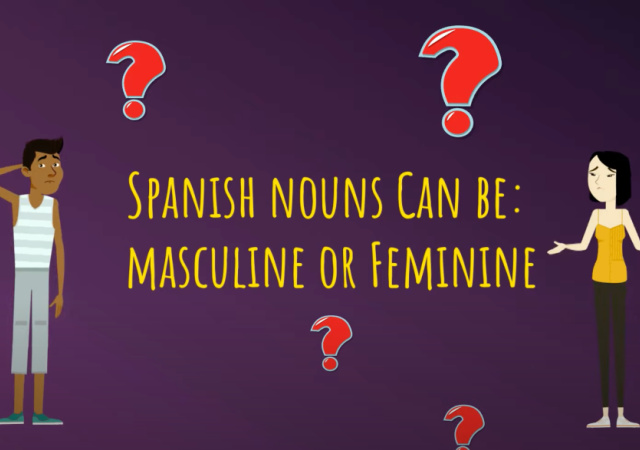 We all know the Democrats and the left love to twist language and change definitions. I mean, we know they do not fit the definition of liberal or progressive.

We also know they have an obsession with gender-neutral language. English is not a gendered language unless talking about your biological sex. The language offers neutral language with “they,” “them,” “we,” “us,” and “it.”

The world has many gendered languages like Spanish. Since the Democrats and the left obviously know what is best for everyone they’ve tried to take over the Spanish language.

We have Latino and Latina. A mixed-gender group of people is referred to as Latinos.

Well, despite the constant push from the left and the Democrats, a new poll from Bendixen & Amandi International showed Latinos do not care or find the word Latinx offensive and bothersome.

The company split the results into three groups: age, political party, and country of origin.

The vast majority of respondents chose Hispanic as the term closest to describing their ethnic background, including Democrats! 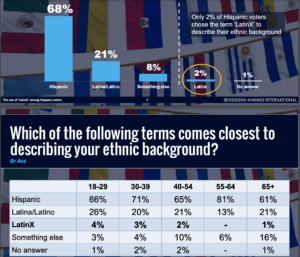 The company then asked the respondents if the term Latinx offends or bothers them. The people could answer “Yes, a lot,” “Yes, somewhat,” “Yes, a little,” “No, doesn’t bother me,” and “Don’t know/No answer.”

A combination of the yes questions added up to 40%. Yes, 40% of those polled find Latinx offensive or bothersome. But 57% of them said it doesn’t them.

Still, though, 40% is quite a bit. Pollster Fernand Armandi said: “The numbers suggest that using Latinx is a violation of the political Hippocratic Oath, which is to first do no electoral harm. Why are we using a word that is preferred by only 2 percent, but offends as many as 40 percent of those voters we want to win?”

Armandi pointed out the word Latinx is not the main reason why the Latino population has shifted to the right. He is correct. Republicans have made an incredible effort to reach out to the community. The situation on the border has not helped either.

My Mexican friend has been screaming about Latinx since it blew up. She tells me all the time it’s offensive. Today she told me: “Latino is literally all-inclusive. To change it to Latinx is not only counter intuitive to the language, but offensive in trying to make a Spanish word fit English norms.”

Joaquin Blaya, a founder of Univision and registered Democrat, said Latinx is not Spanish:

One of the founders of Univision, Joaquin Blaya, said they built the network around the concept of using the words Latino and, especially, Hispanic, because it reflected the Spanish language and united Spanish speakers from across Latin America. He said his objection to Latinx is that it’s “too weird. It’s dumb. It’s foreign. It’s not Spanish.”

“Democrats are helping Republicans make them look out of touch,” said Blaya, a registered Democrat. “We built a network around our Spanish language and we have a shared culture around it. Why are we trying to change this? It’s offensive to a lot of people.”

I wonder how the numbers would look if Bendixen & Amandi International polled people under the age of 18. It seems the younger generation has embraced Latinx.

Once again the lefts Dunning Kruger bites them.

The JACKASSES (Dems) don’t care that they’re wokeness is ethnocentric. They only care that the POLLS show it is a problem.

They love to screw with the English language – and they unfortunately get very little push back on that. Finally people are pushing back against their woke language changes.

One problem – most English professors are Woke. They love their Marxism more than they love their language and culture. So those who should be defending our language are at the forefront of tearing it down.

Hispanics are not woke. They are practical and traditional – they believe in family and God. The JACKASS PARTY is again denying reality if they think Hispanics are the future of their woke godless party.

What? Traditional Catholic families don’t like it when wokesters start teaching their little boys that they can become girls by cutting their pee-pees off? Who woulda thunk it?

Objectifying people and lumping them into weirdo bins like trans-this, ye-that might work with fake ‘intelligencia’ and college dumbells, but not with people who work for a living.

In Hebrew all nouns have a gender, and all adjectives and verbs come in two flavors; you must use the adjective forms that match the noun’s gender, and the verb forms that match the subject’s gender. Numbers also come in both flavors, and you must use the correct type of number for each noun (for instance, you always express a person’s age in feminine numbers, because “year” is feminine).

I’ve heard that there’s an effort to degender Hebrew. It’s ridiculously impossible, and anyone trying is just making a fool of itself.

Even if you could degender Hebrew why go around ruining stuff?

It is the height of HI-larity that leftists demand Hispanics abandon their culture and language and adopt to Yanqui ways. I don’t know any other country other than the US that puts an idiotic x in there like this.

Escucha me, los paletos (paletx): You do not think for yourself any more. We tell you what to think.

It’s not the height yet, Even when you think they’ve reached as high as they can go, tomorrow they will find a way to go even higher.

Shovels are integral to this process.

That made me laugh!

This reminds me of Kwanzaa, the fake African holiday. No country in Africa that I am aware of celebrates Kwanzaa.

The “seven principles of Kwanzaa (umoja, kujuchagulia, ujima, ujamaa, nia, kuumba, and imani) are Kiswahili words. Kiswahili is an east African language and is an odd choice for black Americans whose ancestors came primarily from west Africa (it would be like German American honoring their German ancestors by using Chinese terms). Nor does it help that some of the Kiswahili words are mistranslated or incorrectly used.

Is there an actual Kwanzaa tree? Or do you just put your gifts underneath a basketball hoop?

Not a tree, but a bare metal pole.

Time for Airing of Grievances…

Until Kwanzaa morning, gifts are hidden in your prison wallet.

The most popular gifts for Kwanzaa this year are hammers and crow bars.

I think the proper term is ‘loot’ not ‘gifts.’

I actually laughed out loud. Bravo!

Was this “holiday” created by the CIA or something crazy like that?

Kwanza is about is stupid as “Festivus” from the Seinfeld sitcom.

Hilariously, even Festifvus is being taken seriously by lost atheists:

Conflation of sex, gender, and gendered… and a transgender spectrum.

They’re also nationalists before they are “Hispanic” or “Latina”. Europeans, too. None are “people of white”. And so on and so forth.

Even the d/prog brown shirts at UTEP hate this term.

The “X” suffix is a popular label for mutants. Woke and drowsy.

As usual, white leftists know what’s best for the brown folks. Who cares about their gendered language and its history, right? The white leftist took a gender studies class and deemed a significant part of various cultures offensive.

Incluyéndome a mí. (Including me.). I HATE it with a passion!

I just toss it in the kitty litter with the rest of the caca.

Yeah- keep telling a culture that values machismo in their men that it’s bad. Tell men from latin america how toxic they are… see how that works out.

Wow, what a concept.

Pronouns, like prepositions, are a closed class. No new ones are discovered. It’s not exactly hate that the pronoun movement is met with but amusement or ridicule. Latins are no more likely to hate it than be amused by it. Being a protected class, no terrorism has yet enforced it on them.

Exactly! To hate something, you must first take it seriously. The Latinos I know laugh at “Latinx.” They think it’s Anglo loco. LOL

More than 40% would be offended if they actually bothered to care about why it was pushed in the first place. I can guarantee you that much.

First, they came for the babies… That said, this is a class war in the modern model of Nazis, Maoists, Fascists, Mugabeists, Pro-Choicers, et al.

It came about, because leftists thought the Latino community is about as stupid as the Al Sharpton/Obama community.

The DMV asked me to review my new driver’s license for errors. “Blonde” is wrong, I said. That’s female. “Blond” is the male. It should be “blondx” probably. Anyway they didn’t change it.

I can’t even remember the last time I saw a “brunet”.

This is really good news. The last thing that the ideologues in charge of the democrats can do is course correct.

I study Spanish with a teacher in Costa Rica most every week. I asked him about this Latinx stuff.

He says people in Spanish speaking countries just laugh at it…then ignore it.

Truth be told, most Latinos do not like being called “‘Hispanic” either, It means nothing to them as a label. Inasmuch as it was. a made-up term by the US Dept of Commerce for the 1970 census, that makes sense.

That’s true of my Latino friends and acquaintances in the West, where I live.

Well, “Latinx” is silly and ungrammatical–like most things the Lefties do.

The MARXIST DEMONCRAT PARTY HACKS are all very much like Jeffrey Toobin … in a circle !!!