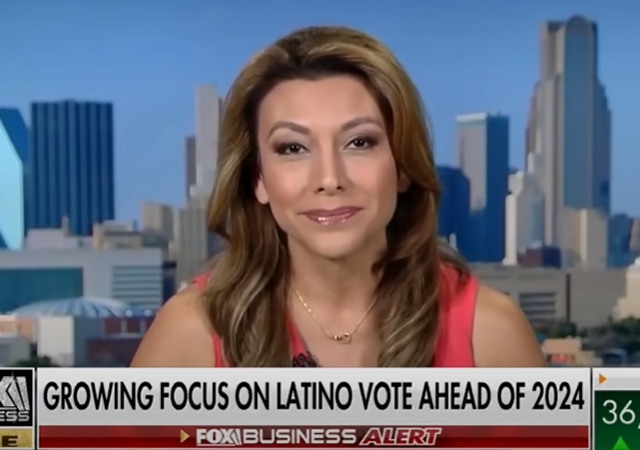 Hispanic voters are trending Republican in a shift that could have a huge impact on the elections of 2022 and 2024. There are a few reasons for this, but two of the big ones are the ongoing crisis at the southern border and inflation.

The GOP should lay out a red carpet for these voters and make sure they know how welcome they are in the party.

Andrew Mark Miller of FOX News points to analysis from a polling outfit that looked at voting in largely Hispanic counties near the border:

Early voting analysis in two primarily Hispanic counties along the Texas border suggests Republicans are outpacing Democrats in voter enthusiasm and perhaps turnout, and Hispanic politicians in the state tell Fox News that its indicative of a larger trend.

A report from the political consulting company Ryan Data & Research shows that Republicans are 76% of the way to matching 2018 turnout in Cameron County, Texas along the southern border with Mexico with eight days remaining until Election Day. In Hidalgo County, which also sits on the border with Mexico, turnout is 65% of the way to matching 2018.

On the Democrat side, the party is only 59% of the way to matching 2018 turnout in Cameron County and 47% of the way in Hidalgo County.

Hispanic political candidates and operatives in Texas told Fox News that the early data points to a larger trend of Hispanic voters, especially in the Rio Grande Valley, supporting Republican candidates in areas that have been predominantly controlled by Democrats for decades.

Callie Patteson of the New York Post reports that another issue driving Hispanic voters to the GOP is concern from parents about what is being taught in schools:

The Republican Party has made massive gains among Hispanic voters since the 2020 presidential election, cutting the Democratic advantage by nearly 20 percent, according to a new survey…

“Hispanic movement toward Republicans is real. Republicans are winning on the issues that matter most to Hispanic voters and are well-positioned to capitalize on Democrats’ extremely unpopular policies,” the NRCC said in a memo outlining the survey…

When pressed on specific issues, the survey found, Hispanic voters in battleground districts are “extremely” or “very concerned” about inflation (78 percent), cost of food and groceries (74 percent) and gas prices (70 percent).

Seventy-four percent of respondents agreed that parents should have a say in what is taught at their children’s schools — a key Republican talking point in recent years — while 22 percent disagreed.

This has been building up over time. Take a look at this December 2021 video report from FOX Business. CulturIntel CEO Lili Gil Valletta explains that many Hispanic Americans think Democrat COVID policies are preventing them from achieving the American dream:

On a final note, you have to wonder how much the Democratic party’s recent embrace of socialism has to do with this. Lots of Hispanic Americans came here to escape from places like Venezuala and Cuba, not to recreate them.

Study after study has shown a 31/31 split with the remainder independent for a few months now. The black vote is also shifting and the left can win national elections with less than about 85% of the black vote.

Yes they can! It’s all in who counts the vote!

Studies have shown that if you don’t vote Republican Mexico will be a better place to live than here.

With regard to the shift in demographic preferences, President Reagan declared, “I didn’t leave the (democrat) Party. It left me.”

Then, suddenly, for no particular reason, Democrats were all gung ho to close the border, and enforce ‘stay in mexico.’

And is it true that Pelosi announcing a new bill to complete the wall?

What about DEPORTING the illegal aliens, regardless of labels?

Piglousy just announced a new bill to complete the wall.

I’m sitting here, hearing my late mother, a staunch, hard loyalist Democrat. “This is silly. Those people just don’t know what is best for them!”

When she heard a lot of the blue collar people were opposing socialized medicine, there was a variation on the theme: “They just don’t understand it’s for their own good.” So said the all-wise woman who, when you got right down to it, was a college dropout taking a soft major in the first place, and at times had a level of snobbery bordering on Hyacinth Bucket.

So we celebrated my mom-in-law’s 89th birthday last fall and we asked about the best and worst single events she’s lived through. On the ‘worst’, she dedpanned:

Quite a different mom! Mine was strange politically, but was quite remarkable (“good” remarkable) in other ways. Most of my friends commented on how “neat” she was.

My mom was a great person too, but also very much a “pinko commie” as I called her. We had many epic political arguments, and then we could set it aside with no hard feelings. Many other people in our family couldn’t fathom how we could go at each other so hard and then not leave mad.

One of my favorite memories is taking her to see Bonnie Raitt in downtown Austin on election night 2016. All the progs in Austin were quite literally melting down all around me… it was surreal. It was a real-life “drinking liberal tears” moment…. my cup ranneth over that night!

He didn’t lose, it was stolen and probably will be again as nothing has changed

No doubt. Team Trump didn’t have the boots on the ground to prevent the other side from cheating. Republican poll watchers? Republican observations during counting? Eyes on drop boxes ensuring no mass ballot dumps? Eyes on the loading dock at vote counting centers to record/prevent late night ballot deliveries? Legal challenges to election law changes (decrees) in every state where they were eneacted? Puts me mindful of Coach Holmgren’s statement after Super Bowl 40 “I knew it was going to be tough going up against the Pittsburgh Steelers. I didn’t know we were going to have to play the guys in the striped shirts, as well.” The right isn’t mobilized like the left – and that’s why Trump lost.

There was one episode in the final season where she completely lost it and called her husband “Dick Bucket”.

And, by pointing that out, you earned a down-tick. Gads…!

People… persons of hues are not the color bloc of diversity dreams.

And ‘Hispanic’ is not a real category. Cubans were already voting GOP in Florida. South Americans are still solidly Democrat. But, Nortenos from the Northern part of Mexico and South Texas through Arizona are the block we are talking about changing their alignment.

What about persons of Hughes? Do they all build satellites and airplanes?

I am an active participant in the North texas cycling community. There is a significantly large percentage of hispanic cyclists. While we rarely discuss politics, its is evident that there is a significant silent support for the conservative positions

We should encourage the liberal media to continue calling on the “latinx” to ignore their own economic needs and vote democrat.

In some ways the last two + years were a blessing in disguise. The establishment hatred of DJT and populist right became very clear highlighting the insane lengths the d/prog would go to oppose. The d/prog abandoned any pretense of being welcoming to moderate or traditional social/cultural viewpoints. The BLM movement and the deafening pushback against the phrase ‘all lives matter’ left zero doubt as to where one stood in the new racial/diversity olympics.

IMO, that more than anything, displayed for everyone the priorities of the d/prog coalition. Latino/Hispanic/Cuban were told they were now latinx and basically ignored. Asians/Indians were told their individual merit was bad because they were ‘white adjacent’. As for non leftist whites ‘shut up and go to the Maoist struggle sessions’; CRT.

These broad cultural attitudes pushed by d/prog did cause an awakening but not in support of ‘woke’ ideology. Quite the reverse. Coupled with patently obvious lies re Covid, ineffective mask mandates, Transgender issues, CRT/equity in schools/work along with a reversal of our brief energy independence by the Biden admin which helped spark now rampant inflation. All in all the d/prog went too far and showed exactly who and what they are. The American people are not buying it.