“We were raised to think that the Republican Party was for the rich and only white men and that’s not true. Look at us. We are the face of the party.” 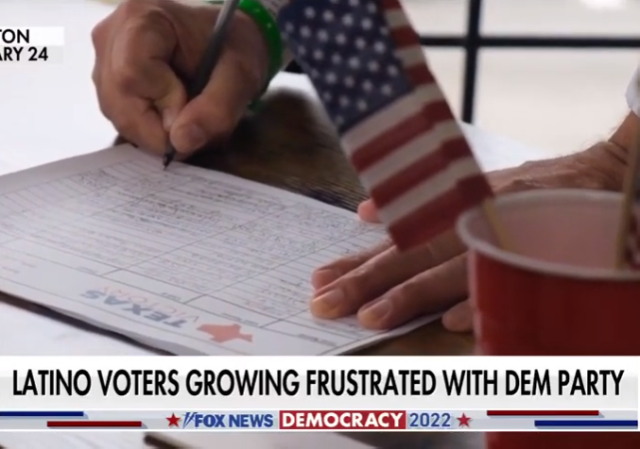 Texas Republicans had a primary on Tuesday night, and the results were far more exciting than anything Biden had to say in his SOTU speech.

We recently noted the Republican shift among Hispanic voters in Texas. Tuesday night was the evidence.

Republicans have long argued that Donald Trump’s gains in majority-Hispanic South Texas were not a one-time deal and, instead, the beginning of a larger trend.

The GOP saw continued strong turnout in the state’s southernmost border counties in the latest display that Trump’s gains among Hispanic voters were no anomaly. But that was only part of the story. When the dust clears after the May 24 runoffs, as many as eight Latinos — including six women — could ultimately be Republican nominees for congressional seats across Texas. In the Rio Grande Valley alone, at least two Latinas will carry the GOP nod.

With the GOP continuing to pump money into South Texas and more Hispanic Republicans, particularly women, running for office, there are signs the traditional balance of power in the longtime Democratic stronghold is beginning to shift.

“We want to show Hispanics that this is what the Republican Party looks like. It looks just like them,” said Mayra Flores, who won the GOP nomination for her South Texas-based congressional seat. “We were raised to think that the Republican Party was for the rich and only white men and that’s not true. Look at us. We are the face of the party.”

As you may have heard, Rep. Alexandria Ocasio-Cortez has involved herself in Texas politics. She and other progressives are on a mission to turn Texas blue.

One of the Hispanic Republican women in the running responded to AOC.

Texas GOP candidate calls out AOC: ‘This is not a progressive, socialist community’

“I have a message for AOC: Do not AOC, our south Texas, and our Texas. We are not a progressive socialist community. Our party is all about faith, family, and freedom, and the voters have spoken. March 1st, we saw victorious people coming out to support our race and we are going to win this runoff on May 24th and we are going to be victorious in November,” Cassy Garcia told “Fox & Friends First.”

Garcia is running in the district of Rep. Henry Cuellar, a nine-term incumbent and the last anti-abortion House Democrat. Cuellar has been critical of the Biden administration’s border policies.

After avoiding defeat in Tuesday’s Democratic primary in Texas, he will head to a runoff against progressive immigration attorney Jessica Cisneros, according to The Associated Press.

Republicans have got to hold the line in Texas. If the state ever does turn blue, it’s game over.

AOC is latinx. Oh wait, she is probably Spanish descent for 5 centuries or so…

I really don’t care how many rungs on the liberal intersectionality ladder a person hits. I care what they stand for.

The d/prog have spent considerable resources and clout, assisted by their msm allies, in creating and supporting the BLM narrative. A corollary to this is the BIPOC agenda; Black and Indigenous People of Color. The problem with naked tribalism like this is that it is by it’s very nature exclusionary. The d/prog have set the table with seats reserved for wealthy white leftists who contribute cash to purchase an indulgence, black race hustlers of all stripes and ‘indigenous people’ who they exploit to advance bogus environmental agenda.

Excluded are all Trump voters who are clearly just racists and wicked reactionaries to the globalist green techno future. Of course Asians are figuring out that they are classified as ‘white adjacent’ along with Latinos who object to the LatinX label. Other groups such as Indians are lumped into the Asian category as are the other productive v dependent sorts of immigrants.

More and more people are figuring out the con these grifters are using and are disgusted with it. Their numbers grow by the day. My advice is welcome them to our Tea Party/MAGA/populist right movement.

I don’t think the Hispanic community ever fell for the race uber alles narrative. Off the top of my head we got exactly the portion of Hispanics who said “I want a smaller government” in 2012.

I think the race uber alles narrative ironically is repulsive to them. However I think we risk limiting defections by keeping up “MUH OBAMACARE!!!” and I think that was a lot of the reason we regressed with the white working class in 2020. Paying for health care is a serious issue, and making it more expensive is not popular (White Working class vote regressed as a result of it).

There is a “Reconquista” fringe in the Hispanic community that is every bit as virulently racist as the black nationalists. But they’re a fringe.

While true the numbers are one sided right now and only getting worst for the “Reconquista” types.

Something is seriously wrong with the universe because I with that. The refusal of r leaders to adequately address healthcare is unfathomable to me. It’s a persistent thorn that d/progs use to torture us.

IMO, the most straightforward way is equalize tax treatment of health insurance and medical spending while using the HSA model to become the portable, individual funding basket. Get rid of every Fed govt public healthcare subsidy/program, set aside 20% of that amount, divide the 80% by every US citizen and put that into their HSA to use for healthcare and insurance spending as they see fit. Use the 20% to assist those with hugely expensive healthcare expenses beyond their control and to rural areas where hospitals don’t achieve economies of scale.

Require hospitals, clinics, labs, in or out patient to transparently list prices for services individually so that consumers can realistically comparison shop. Set modest limits on RX pricing similar to utility regulation; 25% first 12 years, 15% there after, the Feds should fund orphan drug research alongside philanthropy. Give full tax write off to all legit unsuccessful drug development.

Return to a patient centric model for delivery. If that means empowering PA and Nurse Practitioners to meet demand for primary care so be it. The DoD routinely uses both PA and Nurse Practitioners to provide primary care; if it’s good enough for service members and their dependents then it’s good enough for everyone else. If someone wants a Physician for primary care then they can choose to pay the higher cost. Let patients make the decisions about how much, who and where they pay.

To both of you guys:

B) Obama care is shitty legislation that made the problem worse

While both are true if you look at the exchanges you will find working class families are getting insured for 50$ or less a month (a good deal by any reckoning). Obamacare didn’t work out as well for the middle class which is why we need to reform it to make it a better system.

Just repealing it would cause major hurt with the working class which would rightly be blamed on us.

I agree with a lot of what you said there, but ultimately I think any honest attempt to reform the system can’t start with getting rid of subsidies because that would in a best case scenario have a period of pain for people at the lower end of the spectrum who would end up having to deal with non-subsidized costs while waiting for the reforms you mentioned to kick in. In practical terms Democrats than sweep all levers of power on the anger and resentment that causes with the result of it being entirely their policies. Obamacare may have been a bad idea but now it is here to stay we need to reform it to make it work.

I do however as a like your thinking on the issue, and would support a lot of your solutions in general.

Agree 100% about the GOP being AWOL on health care/health insurance. They gutted Obamacare by cutting funding for the “risk corridors” program. This is the reason that the Affordable Care Act is only “affordable” for people inside a low and narrow income band. This move by the GOP was cynical, reckless, and damaging absent an alternative plan. And there was no alternative plan. If you think there was, then post a link to its details.

Many years of patchwork legislation has complexified health care and insurance to the point where they are almost impossible to reform. As CommoChief points out, health care costs must be addressed first. Then deal with health insurance.

The result will undoubtedly end up being a combination of free markets and socialism like many other parts of our lives. I’m a conservative, not a libertarian. I can’t possibly vote for a democrat because of their acceptance of abortion, their rejection of school choice, and their tendency toward totalitarianism.

I wish our side was awol that would be bad enough but if the only idea coming out is “I want to take away that subsidy and make you pay more than tenfold what you are paying now”…….

Our cultural advantage is undermined by our economic disadvantage in terms of policies.

I fully share your sentiments on “I’m a conservative, not a libertarian. I can’t possibly vote for a democrat because of their acceptance of abortion, their rejection of school choice, and their tendency toward totalitarianism.”

Truth be told there aren’t many actual libertarians.

And, they hate seeing their homes trashed by illegals.

NPR was doing the dance this morning on how this doesn’t really mean anything in the long run and that Hispanics will soon see through the GOP’s worn out message. It was great to hear the panic!

In my happy dreams, the history books of 2060 will relate how badly the Democrats stepped on their own d*s with their clever program to swamp conservative Americans with revolutionary Marxist immigrants.

Hispanic, Latino, People of Brown, LatinX (i.e. mutant), perhaps not. People from all walks, from all corners, overt time, are understandably community, family, not color, oriented.