The Democrat obsession with Russia is pathological 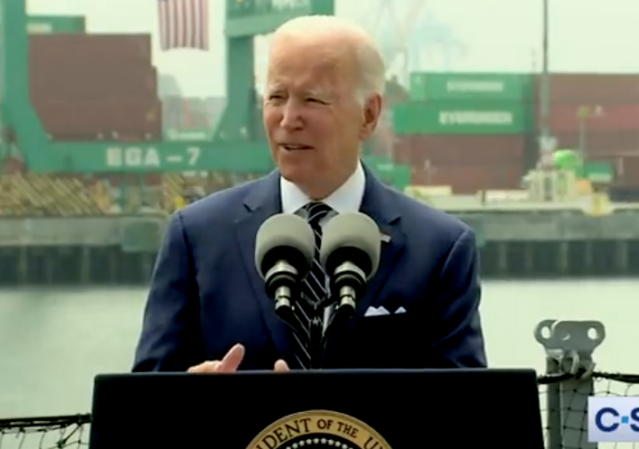 Thursday, Gasbuddy said national gas prices had surpassed all previous prices. Friday morning it was announced that inflation hit record highs across the board. And Friday afternoon, Biden was blaming Russia.

Speaking in front of a backdrop of shipping containers, Biden blamed his decimation of the American economy on the “Putin tax.” Which is absurd for an abundance of reasons, namely that the person in Biden’s ear piece is squarely to blame for our current economic woes, not to mention that our congress critters have voted to send gazillions (approximately) to Ukraine.

BIDEN: "We've never seen anything like Putin's tax on both food and gas." pic.twitter.com/pKsZ9N8qMq

The “Putin Tax” was self-inflicted on the country even as Russian oil was being shipped to US. By the way, how interesting that Ukraine has slipped away from the main news. With Russia successfully creating a corridor from Russia to Crimea, the way is paved to a slowly, but costly, push to Odessa and the border of Moldova landlocking Ukraine. End game.

With the Pentagon owning up to 40+ biolabs in Ukraine maybe the focus is intentionally off. Frankly, the Admin doesn’t care as their only goal is one party subjugation of the US. A lot of money can be made at the beginning and end of a country.

when I first started hearing about this story, one of my first thoughts was, making Ukraine landlocked was a major goal of Russia. Control the coast and you can control commerce.

“The Democrat obsession with Russia is pathological”

Hell, they used to love Russia when the Soviet Union was still around. Then the Russians proved that communism doesn’t work and it will always fail, and the democrats have never forgiven them for that.

Strange how under Trump we were exporting oil and now under Biden we’re begging to import it. Something changed. Wonder what it could be?

Nope, nobody’s buying it. The ped0phile-in-chief is just going to have to take it on the chin as this is all his fault. It’s not Putin, it’s PedoJoe.

Biden thinks Putin is the president. It’s time to bring Mueller out of retirement to write another report.

Ironically, even if Biden’s statement were true, the “Putin tax” is also his fault. IMO, the seizure without consequence of Crimea in 2014 under Obama/Biden, the idiotic withdrawal from Afghanistan, his general weakness on every issue, his statement that his reaction to Ukraine would depend on the size of the incursion and, finally, not arming Ukraine as Russia was sending its army to their border all had to lead anyone with a brain to believe there would never be a better opportunity than now to seize more of the country.

When in Thor’s name are we going to stand up to the Putin lobby? We must put a stop to Putin taxing our food and gas.

I urge congress to come together and pass a common sense law to reign Putin in. Raise the age limit on Putin, require Putin to undergo a background check, and put a limit on over the counter grocery store magazines.

We all look on in horror when mush mouth speaks.

“More Wimp From The Mush.”

If Putin has the power to tax the US, doesn’t that mean he’s in charge of the country?

I guess next April we’ll be sending our tax returns to Moscow?