I wonder what Wag the Dog theatrics the Biden administration and Democrats will come up with to distract from devastating economic news released today. 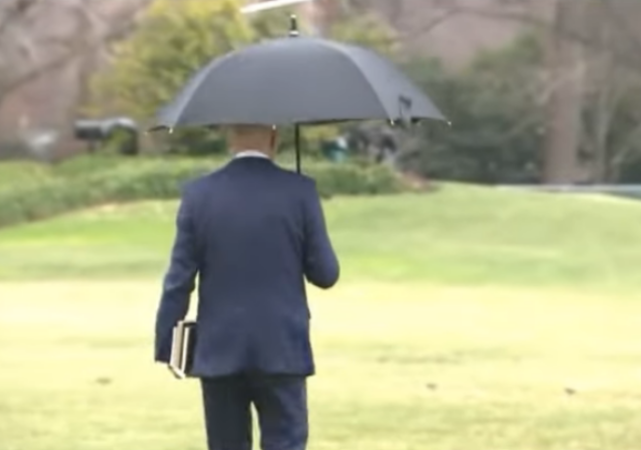 I stayed true to my promise, I’m Not Watching The Made-for-TV J6 Show Trial Narrated By Hoaxers, Liars, and Leakers, which as I wrote is just a political distraction from the intentional gutting of the country:

The southern border is effectively open, we have lost our sovereignty as a nation. Food prices and gas and other measures of inflation are out of control.

Sure enough, this morning brought an inflation report that shows the damage from Bidenomics. CNBC reports:

This is a record-setting presidency:

It may be worse than reported:

The media are misreporting the real data, and I’ll explain why. 1/ pic.twitter.com/ab8VP0a2H5

There is no silver lining:

I keep looking at the line item breakdown of the CPI report searching for silver linings and I just don't see any. This report is a disaster if you're a Fed or Biden administration official hoping this inflation will go away without a serious downturn.

I wonder what Wag the Dog theatrics the Biden administration and Democrats will come up with to distract from devastating economic news released today.

One of these channels is not like the others. pic.twitter.com/73AQpiPiWX

‘Pay no attention to the man behind the curtain’ is all they have left. Won’t work when folks are reminded every day of our issues when buying gas and groceries, maybe getting mugged on the way to do so or when they seek a new mortgage and get sticker shock over the monthly payments in a rising rate environment. Realty will trump the fake narrative so to speak. Pun intended.

Look through the smokescreen and see the cold hard truth.

Truth #1: Just the sheer number and size of the problems clearly establish beyond any shadow of any doubt that these are not “accidents” or the result of “stupid” or anything else- they are the DESIRED RESULTS. (That in and of itself must tell the thinking human that since the goal is being achieved- there will NOT EVEN BE THE ATTEMPT to change or “fix’ it)

Truth #2: The fact they are trying to “blow it off” ( cover it up, hide it, explain it away, try to convince otherwise or insert tactic here) must also show everyone that there is not even the intent to try to do anything to change it.

People must come to realize and start treating this accordingly. The left and the RINO are ENEMIES out to destroy both this country and its citizenry and subjugate us to their masters with the “elite” as our “ruling class”.

If we do not STOP THEM ( action verb)- they WILL SUCCEED!

In addition to a horrible CPI print the Michigan Univ consumer sentiment dropped to the lowest level in the history of the survey. People recognize problems exist. Now we need to make the case for our solutions. Frankly, given the abysmal failure of d/prog and Biden policies it should be an easier sell than ever.

Don’t worry. Biden’s economic brain trust has come up with a new inflation tax to make it prohibitively expensive.

This inflation is disturbingly deep, due to a breakdown of an overly large global supply chains, the Fed’s misguided monetary policy of massive dumping of money and low-interest securities into the economy, and U.S. Government’s reckless fiscal spending. If you look at the effects of these actions on the economy, its shows severe concentration polarization in the future values of short-term treasuries. The same polarization phenomena in heart attacks. Much more severe than in 2007-2008.

This Government doesn’t function. There is no one at the helm. It’s like a boat being tossed back and forth in a severe storm, without anyone trying to respond. Our representative government only represents a severely troubled group of voters who can’t think. Unless this changes, this ship will eventually sink.

I hope the Democrats continue these hearings trough the election. Then they will be swept out of office.

The voters care about inflation, not this.

“The voters care about inflation, not this.”

If the voters had power to control the outcome of elections that would mean something. But Democrats have other ways of wining elections.

This constant drumbeat that all is lost needs to stop. Not only is it false it’s counter productive and works at cross purposes to electoral change. Focus on your precinct and get it clean. Then your County elections then your State elections. Make the effort to get involved in how election are run and administered because the d/prog will definitely do so.

Lots of States have made efforts for improving election security and ballot integrity. More room exists for further improvement. Start local, build outward. Do that which is possible today while working to set conditions that make further changes possible tomorrow.

Agreed. Yes, the Dems work the steal. That can be countered.

As the Instapundit points out, to make a difference we need to volunteer. Cash helps but volunteering is best. Find candidates you like and help them out.

How long until bread riots start and how will the administration blame President Trump?

That means 1 in 4 people on the planet are facing Chronic Starvation. And, the Great Famine will continue until Natural Gas become plentiful enough that Fertilizer plants come back online, or 500 million people die.

For the Leftist, narrative is primary, secondary and tertiary priority. Truth be damned!

“I wonder what Wag the Dog theatrics the Biden administration and Democrats will come up with to distract from devastating economic news released today.”

Dumping oil, defense contractors, Israeli-related companies, gun companies, in favor of government-favored green or unionized companies has turned into a bad deal for stakeholders AND shareholders. As I tell my clients “Don’t invest your politics. Stick to the fundamentals. We are investing to make money.

The stock market is a pass-through vehicle for inflation if you focus on companies that have pricing power.

It’s pretty funny how people went against math in their investment impulses (not fair to call them decisions).

Divesting from a profitable and stable venture only creates a buying opportunity for practical and savvy people.

While these scumbags in D.C. fuck around crying about a riot that happened more than a year ago, my extended family and I are assessing just how much firewood can be harvested from our respective properties because heating oil prices have more than doubled.

We’re all going to have to use supplemental heat from wood stoves this coming winter, lest we tap into savings.

We’re also figuring out floor freezer capacity and coordinating our various hunting licenses and tags to reap the maximum amount of game meat from the upcoming hunting and fishing seasons.

We’re fortunate to have the acreage, ability, and access to natural resources. Many people don’t. Hunting and fishing has always been a tradition, it’s now becoming a necessity.

I don’t have a wood stove but yes, prepping a bit is essential. Just bought another chest freezer for the pole barn and am contracting for a whole-house generator (as I expect power disruptions). My extended family are hunters, and I’ll provide some extra freezer space. We’ll manage.

“The southern border is effectively open, we have lost our sovereignty as a nation. Food prices and gas and other measures of inflation are out of control”

Imagine being a politician with cratering approvals in a
country that increasingly can’t afford gas or food, and deciding to
remind the citizens how easy it was the last time disgruntled folks
stormed the capital city and sent the government fleeing in panic
https://twitter.com/erinsmithSF/status/1535089746744991744

At this point, it’s maddening watching dotard-marionette, Biden’s, handlers, chaperones, caretakers and assorted mouthpieces laughably attempt to posit that the endless swathe of socioeconomic destruction at home, and, international chaos, abroad, have nothing whatsoever to do with the dotard’s manifestly ill-conceived and predictably ruinous policies.

It just perennial “Amateur Hour,” with the vile Dumb-o-crats in charge of anything. They are incompetent, stupid and narcissistic biological adults, with the intellectual depth of toddlers. I wouldn’t trust them to clean toilets. And, these idiots have the gall to strut about and pretend that they’re allegedly the smartest people in any given room.

This is brilliant and spot on!

‘Now THEY know how it feels to be afraid’: Thread on the ‘ugly truth’ about what regular Americans REALLY think about January 6 is straight-FIRE

Make the numbers look as bad as possible now and they hope the rates will or stabilize and decline a little and they can say hey we got inflation under control. We need to stay in office to finish the job.
Of course leaving out the part that it was us that ramped up the inflation rate with our own failed policies.