“Protests over soaring food prices continued in several cities in Iran on Saturday.” 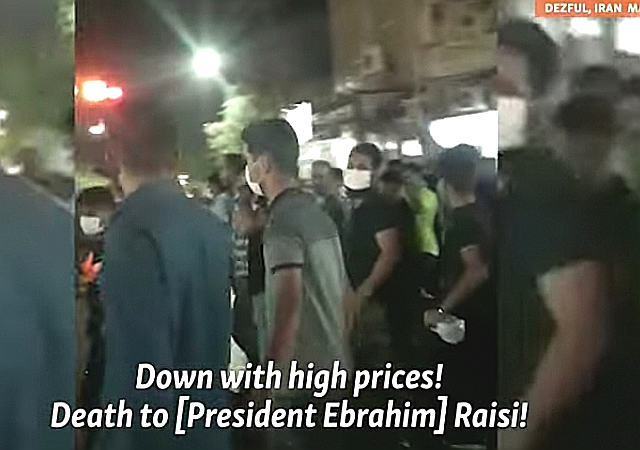 The oil-rich Shia Islamic regime, which has closely allied itself with Russia since the beginning of the Ukraine invasion, appears to be suffering the fallout from the raging conflict. The TV channel France24 noted that “in recent days, [the Iranian] people have been struggling to obtain basic necessities. Lines have stretched outside of food stores where some people have been seen fighting over cooking oil. Others have turned to looting.”

While ordinary Iranians face hardships, the regime is busy investing billions expanding its nuclear weapons program and financing terrorists groups abroad. In April, the Mullah regime signed up to join the emerging anti-U.S. military alliance led by China, and conducted war games with Chinese and Russian navies in the Indian Ocean two months ago.

An Iranian lawmaker says one person was killed in his city during recent unrest over price increases in the southwestern Khuzestan province, semi-official ILNA news agency reported Saturday.

Ahmad Avaei, a member of parliament from Dezful did not give the name or gender of the person killed, or say how many people were arrested during the unrest.

State media reported Friday that Iranian authorities had arrested at least 22 demonstrators who had been protesting sudden price hikes of subsidized staple foods, 15 of them in Dezful. A firefighter was injured in clashes with demonstrators in a nearby city, Andimeshk.

The unrests follow Iran’s announcement earlier in the week that the cost of cooking oil, chicken, eggs and milk would rise by as much as 300%, as food prices surge across the Middle East due to global supply chain snarls and Russia’s invasion of major food exporter Ukraine.

People of Iran are on the streets again fighting and protesting against the same regime that USA, EU and rest of the world are trying to make a deal with it. This regime is on the verge of collapse. Here is lorestan hours ago. #IranProtests pic.twitter.com/MuCAjdwJL3

Protests in Iran, set off by economic turmoil, often turn into anti-regime unrest. In November 2019, protests which began over fuel price hike ignited a nationwide movement against the Mullah rule. The regime quelled those protests by murdering more than a thousand demonstrators. The Islamic Guard (IRGC) and other pro-regime militia used snipers, machine guns, and helicopter gunships to mow down hundred of unarmed demonstrators, independent investigations showed.

The current wave of anti-regime protests in Iran come at an inopportune time for President Joe Biden, who desperately wants to restore the 2015 nuclear deal with the regime. His administration has already made a series of concessions to appease Tehran. Reversing President Donald Trump’s policy of Maximum Pressure of Iran, the Biden White House weakened the sanctions pressure on the regime.

There are 9 missed meals between civilization and anarchy.

There might be more than three days but not many more. When conditions become too perilous for LEO and the LEO families are either endangered or hungry themselves or both then the thin veneer of order will disappear with the withdrawal by LEO as they place the well being of their families ahead of the community. We really shouldn’t expect them to do differently.

Figure two or three days of missed meals for the onset of disorder then blooming over the next 48 to 72 hours. So inside a week from first missed meal to the withdrawal of any meaningful restraint on disorder. Unless of course the LEO are willing to obey shoot to kill orders on day one v the leading edge of anarchy. Then they might prolong the decline for a week or ten days max.

High prices and price gouging are almost always a solution, not a problem. It keeps the product available, encourages supply and prevents hoarding.

It’s always economists vs populists on this.

A very entertaining podcast on it https://www.econtalk.org/munger-on-price-gouging/

Price gouging is an inflammatory term for inflation, and generally an inaccurate one. At every step of the food chain, you’ll find that the producer is at the mercy of whoever provides his materials. If you trace back far enough, you’ll always come to a disruption in the chain, generally involving weather or government. I don’t bother with podcasts, but I noted that one of the first comments was written by an individual who thinks that government is the solution to all problems. They aren’t – they’re generally the cause.

Not generally. The price of a bag of ice after a hurricane is not inflation.

Sure it is. More demand than supply or phrased differently too much money supply and too little product. That’s the definition of inflation.

General price level is always mentioned. Individual prices go up and down all the time. That’s called a price signal.

A price signal alerts suppliers that they need to increase or decrease level of production because the amount of supply is too far from the equilibrium point. A hurricane event in which prices temporarily rise based on temporary increased demand for a finite supply of ice is untethered from increased production.

It’s a temporary phenomenon that does not provide a signal for suppliers to allocate capital to ramp up production capacity because that increased demand is temporary.

In any event it isn’t gouging it’s the market responding to an temporary increase in demand. This eventually results in demand destruction and the price falls. People can use milk jugs with a heavy salt water content; remains frozen longer to help keep items cool. Lots of ways to plan and prepare for their individual situation; the govt tends to have one size fits all planning.

It will be high prices or empty shelves.

I am looking forward to seeing Iranian leaders and Mullahs being roasted with an apple in their mouth’s.