The South China Morning Post: “Beijing is keen to strengthen ties with opponents of the US following Russia’s invasion of Ukraine.” 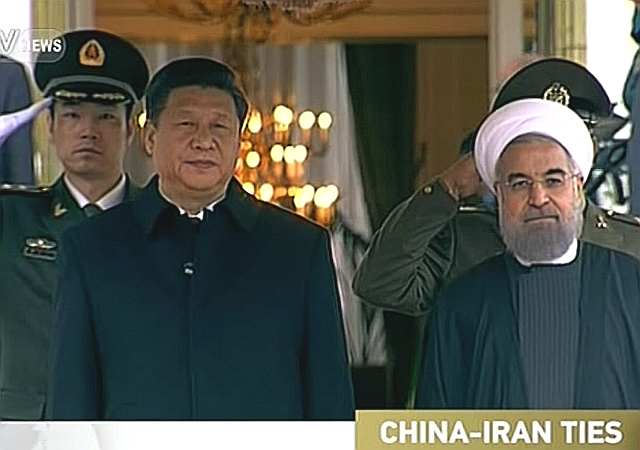 While President Joe Biden’s administration still hopes to restore the Obama-era nuclear deal with the Mullah regime, Iran and China have pledged to deepen their military cooperation to confront the United States, media reports say.

The announcement to boost the China-Iran military ties was made following a meeting in Tehran between Iranian President Ebrahim Raisi and Chinese Defense Minister Wei Fenghe, the Hong Kong-based newspaper South China Morning Post reported Thursday. “Beijing is keen to strengthen ties with opponents of the US following Russia’s invasion of Ukraine,” the daily added citing the Chinese sources.

The move comes as the Biden White House has failed to revive the 2015 Iran nuclear deal despite almost 12 months of talks. Tehran has used this time to increase its stockpile of near-weapons grade uranium and ramp up its nuclear weapons capabilities.

China and Iran have vowed to step up defence cooperation, including more military drills, as the two countries move closer together under growing pressure from the United States.

In a meeting with Chinese Defence Minister Wei Fenghe on Wednesday, Iran’s armed forces chief of staff Mohammad Bagheri said the two nations will work together on military training and exchange of knowledge, the semi-official Fars News Agency reported.

Wei was visiting Tehran on Wednesday, where he also met President Ebrahim Raisi and described his trip as taking place against the backdrop of the “current turbulent international situation”.

“The trip reflects the importance of China-Iran relations and firm mutual support and joint progress,” Wei said, according to a Chinese defence ministry statement.

“The Chinese military is willing to maintain strategic communication with the Iranian side, make good use of the cooperation mechanism, and promote practical cooperation, so as to push the relationship between the two militaries to a higher level”.

China’s deepening military ties with Iran is part of Beijing’s strategy to create an axis to confront the U.S. and its Western allies. Ahead of the Ukraine invasion, China and Russia formed a de facto military alliance. In November 2021, the Chinese and the Russian defense chief signed a five-year road map for broader military alliance.

Since President Biden took office, China and Iran have been working to step up their military cooperation. In March 2021, Beijing and Tehran signed a $400 billion economic and military deal. The agreement, which allows China to access to Iran’s oil and natural resources, also gives it access to Iranian military and naval bases, the media reports confirm.

No doubt with Washington’s blessing

Sounds to me like they don;t expect Dominion to save the day in upcoming elections.

This is an opportunity to raze Iran, something they have been asking for for a long time. Doing so would send China, and Russia a clear message. I am guessing that we still have neuron bombs. It is hard to believe that we actually eliminated those weapons. I would like to see Iran’s enriched nuclear materials excited by a high neutron flux, leaving that material too “hot” to handle.

It would be poetic to return Iran’s living conditions to a state more or less equal to Mohammed’s time, and keep them in that state for at least a century.

Sigh.
Supervillains of the world unite — you have nothing to lose but your last remaining effective opposition.

Per the Biden/Obama puppeteers: this is all going according to plan.

Man, are we collectively stupid. Maybe we deserve to lose our country.

Counter what? A feckless, vegetable of a president who is gutting the country?

They are gathering to split the spoils of a defanged U.S.

Never would have happened with President Trump.