The U.N. sanctions included a conventional arms embargo against Iran. 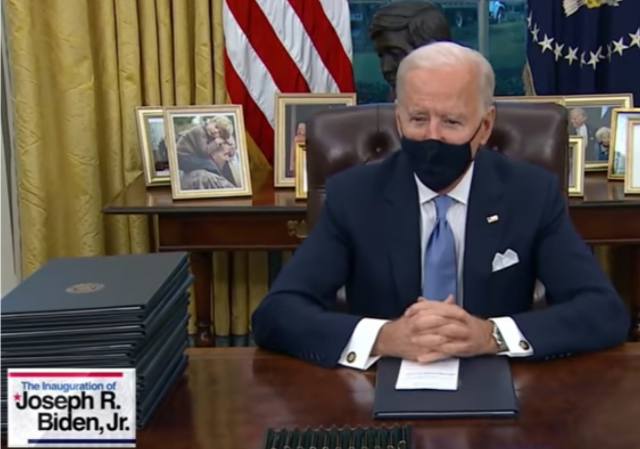 President Joe Biden has offered to restart nuclear talks with Iran. The Biden administration “would accept an invitation” from the European Union to meet Iran and other signatories of the 2015 nuclear deal, State Department spokesman Ned Price said on Friday.

Ahead of the negotiations, the Biden White House announced the reversal of President Donald Trump’s decision to enforce U.N. sanctions on Tehran. The administration “told the United Nations Security Council it was rescinding a Trump administration assertion that all U.N. sanctions had been reimposed on Iran in September,” the news agency Reuters reported.

The U.N. sanctions included a conventional arms embargo against Iran,  lifting them could potentially trigger an arms race in the Middle East.

The Biden administration on Thursday rescinded former president Donald Trump’s restoration of U.N. sanctions on Iran, an announcement that could help Washington move toward rejoining the 2015 nuclear agreement aimed at reining in the Islamic Republic’s nuclear program.

Acting U.S. Ambassador Richard Mills sent a letter to the U.N. Security Council on behalf of President Joe Biden saying the United States “hereby withdraws” three letters from the Trump administration culminating in its Sept. 19 announcement that the United States had re-imposed U.N. sanctions on Tehran.

Mills said in the letter obtained by The Associated Press that sanctions measures terminated in the 2015 council resolution endorsing the nuclear deal with six major powers, but restored by Trump in September, “remain terminated.” (…)

Biden has said the United States wants to rejoin the pact and the State Department said Thursday the U.S. would accept an invitation from the European Union to attend a meeting of the participants in the original agreement — Britain, France, Germany, Russia, China and Iran.

The Biden Administration rewards Tehran as UN inspectors uncover more evidence of the regime’s secret nuclear weapons program. According to the Reuters on Friday, the “U.N. nuclear watchdog [International Atomic Energy Agency (IAEA)] found uranium particles at two Iranian sites it inspected after months of stonewalling.” Since President Biden entered the White House, the IAEA also disclosed Iranian efforts to ramp up the production of enriched uranium and other nuclear material needed for building a bomb.

Following the Obama-era policy of appeasing the enemies and punishing trusted allies, President Biden did not even bother to inform Israeli Prime Minister Benjamin Netanyahu about the impending policy shift towards Iran during the much-awaited telephone call between the two leaders, media reports indicate.

“President Joe Biden did not directly inform Israeli Prime Minister Benjamin Netanyahu about the shift in U.S./Iran policy when they spoke for the first time on Wednesday,” the Reuters confirmed in a separate report.

The U.N. weapons embargo, which has been in place since 2007, was due to expire last year. After the U.N. Security Council overwhelmingly voted against a U.S. resolution calling for the embargo’s extension, President Trump signed an executive order in September 202o reinforcing it unilaterally.

The main opponents of the sanctions and weapons embargo are Russia and China. Both countries are eyeing big arms deals with Tehran, offering from advance battle tanks to air defense systems to the world’s biggest state-sponsor of terrorism.

The United Kingdom, France, and Germany, all signatories of the 2015 nuclear deal, also opposed President Trump’s decision to enforce the U.N. sanctions. French and German companies had lined up big investments in the oil-rich country in the wake of the Obama-era deal.

The Trump administration had been committed to keep the embargo in place to minimize the potential of putting the latest Russian and Chinese weapons systems in the hands of Iran’s Islamic Revolutionary Guard Corps (IRGC) and Iranian-backed terrorist groups from Gaza to Yemen.

“We are going to act in a way – and we have acted in a way – that will prevent Iran from being able to purchase Chinese tanks and Russian air defence systems and resell weapons to Hezbollah,” then-Secretary of State Mike Pompeo said in September while explaining the position taken by the Trump administration.

The timing of President Biden’s concession on the U.N. sanctions appears nothing short of a diplomatic surrender. “Tehran has set a Feb. 23 deadline for Washington to begin reversing sanctions, otherwise, it says, it will take its biggest step yet to breach the deal,” the Reuters reported on Friday.

Am I to believe from the headline that Biden is going to BEG the Iranians to let us back into the deal?

Yeah, negotiating with terrorists has always worked in the past.sarc

Barky 2.0 administration will love to get back in the grace of Iran.

Folding your position and ceding strength is always a good opening move in international negotiations.

We should be talking with Iran about nukes, after they have received at least half a dozen.

What do Biden’s puppeteers gain from this move? Everything he has does so far is basically Rolling America over and showing the world it’s belly…like some abused dog.

“Everything he has does so far is basically Rolling America over and showing the world it’s throat…like some abused dog.” /FIFY

The New triad is China, Russia and Iran. Biden is in the bag for China, and For Iran. As for Russia…I don’t know but even so cue Meatloaf cause two out of three ain’t bad….for the NWO.

Disarm the populace, increase dependency on the government, silence dissent, import unlimited numbers of future constituents/subjects, and get in bed with external enemies.

WE have seen this before, but never in this country. The great experiment will not end well.