U.S. Envoy Says Iranian Regime May Have Killed Over 1,000 Protesters

U.S. Envoy Says Iranian Regime May Have Killed Over 1,000 Protesters

U.S. special envoy Brian Hook: “This is the worst political crisis the regime has faced and its 40 years.” 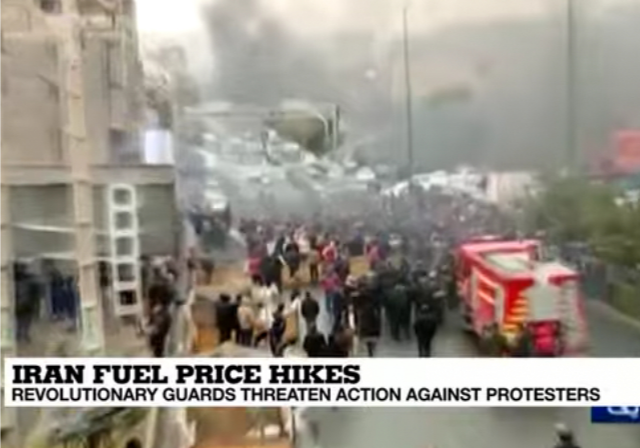 Tehran may have killed more than 1,000 protesters during the deadly clampdown against anti-regime protests, the U.S. State Department said. “As the truth is trickling out of Iran, it appears the regime could have murdered over a thousand Iranian citizens since the protests began,” the U.S. Special Representative for Iran, Brian Hook, disclosed on Thursday.

“Thousands of Iranians have been injured, and at least 7,000 more arrested,” special envoy Hook said. “This is the worst political crisis the regime has faced and its 40 years.”

A video footage cited by the U.S. State Department showed Iranian security forces encircling a group of unarmed protesters, shooting indiscriminately at them from machine guns mounted on pickup trucks and mowing down at least 100 demonstrators in this single incident.

Anti-regime protests began in mid-November after Tehran announced rationing of gasoline and a sharp hike in fuel prices. What began as discontent over deteriorating living conditions turned into nationwide anti-regime protests, hitting around 20 major cities across Iran, including the capital Tehran. Protesters called for the end of the Islamic regime, setting fire to propaganda billboards, banks, and regime’s offices.

The Iranian regime called in the  Islamic Revolutionary Guard Corps (IRGC), a U.S.-designated terrorist group, to quell the protests. Pro-regime forces deployed snipers, machine guns, and helicopter gunships to kill anti-regime protesters. Video evidence showed “security forces shooting unarmed demonstrators from behind while they were running away, and shooting others directly in the face and vital organs,” The UN High Commissioner for Human Rights, Michelle Bachelet, confirmed on Friday.

Iranian security forces may have killed more than 1,000 people since protests over gasoline price hikes began in mid-November, U.S. Special Representative for Iran Brian Hook said on Thursday, adding that many thousands were also wounded in the unrest.

“As the truth is trickling out of Iran, it appears the regime could have murdered over a thousand Iranian citizens since the protests began,” Hook told reporters at a briefing at the State Department.

Among those were at least a dozen children, Hook said, but cautioned that the numbers were not definitive as Tehran blocked information. He said that “many thousands of Iranians” had also been wounded and at least 7,000 detained in Iran’s prisons.

While forces loyal to the Islamic regime are gunning down unarmed Iranians on the streets, the country’s so-called Supreme Leader Khamenei has called for the detained protesters to be treated “with Islamic compassion.” The regime is complying by raping and torturing detainees arrested in the wake of recent protests, media reports suggested. Iranian state-controlled TV channels aired forced confessions extracted from detained dissidents.

Amid popular unrest at home, Tehran is advancing its nuclear-capable ballistic missiles in violation of the United Nations Security Council resolution, Britain, France, and Germany stated in a statement on Wednesday. In recent months, the Islamic regime has launched military operations in neighboring Arab countries, attacked oil tankers in international waters, and repeatedly vowed to annihilate Israel.

While President Donald Trump pursues a policy of “maximum pressure” against the regime, European countries have responded to this blatant aggression by appeasement. Last week, more European Union member states — including Belgium, the Netherlands, and three Scandinavian countries — joined the Iranian payment mechanism that aims to bypass U.S. sanctions. Britain, Germany, and France are the leading promoters of the set up, which Washington sees as a money laundering and terrorism financing scheme.

The last time this happened, there was a deal, palettes full of cash, and a vacuum where ISIS could progress.

notamemberofanyorganizedpolicital in reply to n.n. | December 7, 2019 at 2:53 pm

That “ain’t” gonna happen this time around.

Lucifer Morningstar in reply to notamemberofanyorganizedpolicital. | December 7, 2019 at 4:30 pm

Want to bet? You’ve got Britain, France and Germany funneling millions of dollars worth to trade and money to Iran through the illegal EU money laundering mechanism. They’ll find a way to bribe Iran come hell or high water. And we’ll all be fine right up to the point that first nuclear bomb is detonated in Israel. And then we’ll have a problem.

notamemberofanyorganizedpolicital in reply to Lucifer Morningstar. | December 7, 2019 at 5:58 pm

Understand your points about the EU’s Fourth Nazi Reich,
but there’s a new sheriff in town!

Illegal? It is everything else you say, but how is it illegal? They are not subject to US law. In their countries they make the law, and by definition this is legal.

You are right about that. But only if that money keeps circulating between EU and Iran. The moment it enters US financial institutions (or those doing business with the US), the money generated by busting sanctions again becomes subject to US laws.

Perhaps Israel should let the world know that they have nuclear tipped missiles aimed at Brussels, Paris, Bonn and yes, even London in case an Iranian nuke hits Israel.
A bit crude but so is Europe’s coddling of killers.

Anything for the Almighty Euro. Gotta sell them airbuses.

murkyv in reply to notamemberofanyorganizedpolicital. | December 7, 2019 at 4:32 pm

Hillary would have gladly handed over a few more pallets of cash.

notamemberofanyorganizedpolicital in reply to murkyv. | December 7, 2019 at 5:57 pm

The frantic efforts of an exploitative elite to eliminate dissent only accelerates the regime’s path to collapse.

Regimes that are losing public support always make the same mistake: rather than fix the source of the loss of public trust–the few enriching themselves at the expense of the many– the regime reckons the problem is dissent: if we suppress all dissent, then everyone will accept their diminishing lot in life and the elites can continue on their merry way.

“The People’s Mojahedin Organization of Iran (PMOI/MEK) released the names of 19 more martyrs of the nationwide uprising. As such, the number of victims who have been identified so far stand 320.

The number of martyrs in the uprising that spread to 189 cities exceeds 1,000. Several children and minors are among them.”
https://tsarizm.com/news/middle-east/2019/12/05/iran-revolution-update-over-1000-protesters-dead-iranian-resistance-publishes-names-of-those-killed/

I highly recommend those interested in Russia and the surrounding countries bookmark Tsariszm.com. It is a newsite run by ex-patriot Russians and Eastern Europeans. Well done with some surprising information. It does not stagnate, this is an active site and should be on anyone who has an interest in these areas, resource list.

The Europeans and progressives love to lecture about morality, especially to America.

notamemberofanyorganizedpolicital in reply to oldschooltwentysix. | December 7, 2019 at 5:59 pm

Yes, the volk who totally lack things always obsess over them….

The Iran regime won’t go down without a very bloody fight. The leaders have no desire to live out their lives as exiles in some Moscow backwater. And the lower echelon security forces have no where else to go. No, they’re going to fight to the death. Putin’s professional mercenary force will be there through the thick of it.

All of them have too much to lose. The secret nuclear weapons installations. The terrorist networks. Global drug and weapons running. Money laundering and cryptocurrency scams.

do not believe it will come to that–if had to bet on one secret/intelligence service on earth, would be mossad–second to none–professional and lethal indeed

Don’t count on it not happening. Iran will simply say, “Inshallah!”, if Allah will it, and push the big red button. And as they say, that’s all folks. You’ve got a nuclear armed Iran with the religious willpower to use it.

I find it hard to believe that there would be any Iran after such an event. Also, I think that Israel is more than capable of a preemptive strike preventing Iran from nuking them.

I find it hard to believe that there would be any Iran after such an event. Also, I think that Israel is more than capable of a preemptive strike preventing Iran from nuking them.

And as for Israel “preempting” any such strike? Not hardly. One missile from Iran up and over into Israel and that’s all folks. Game over. Not a whole lot Israel can do but hope to intercept the missile before it strikes.

notamemberofanyorganizedpolicital in reply to texansamurai. | December 7, 2019 at 6:01 pm

Maybe we can that insane Swede to attack Iran.

“Swedish activist Greta Thunberg is angrier than ever. The 16-year-old climate crusader, whose childhood was stolen by everyone except China, says that the wave of climate change school strikes over the past year has “achieved nothing”……

“Greta Thunberg Enraged After Climate Strikes “Achieved Nothing”, Has Yet To Visit China”

Milhouse in reply to notamemberofanyorganizedpolicital. | December 7, 2019 at 8:08 pm

What did she expect it to achieve? In the best of all possible worlds, for her, what could it possibly have achieved?

Milhouse in reply to notamemberofanyorganizedpolicital. | December 7, 2019 at 8:23 pm

When I was at school, if I’d tried to “go on strike” I’d have got a few good slaps on the bottom and I’d have had to go to school anyway.

consider israel’s announcement of concrete evidence to be presented shortly of iran’s violations–most of the western world is aware of what iran has been doing(particularly with all the prior $$$/assent/assistance of obama,et al)–nothing new here but rather as a public justification(before the fact)for a pending israeli action/strike to eliminate the threat–hence reference to ” doctrine of informed consent “