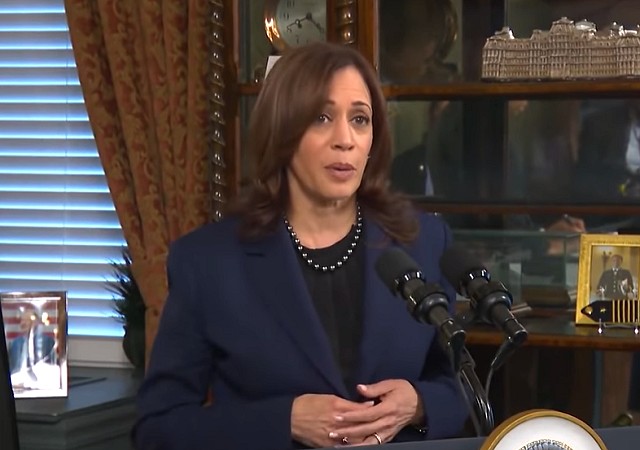 I think it’s safe to say at this point that Vice President Kamala Harris has hindered more than helped Joe Biden’s presidency, whether we’re talking the policy failures like her gross mismanagement of the southern border crisis or the word salads and cringeworthy flubs she’s become infamous for whenever she gives interviews and speeches.

One would think that it would be hard to upstage Biden in the “embarrassing moments” department considering his lengthy record of some of the most epic gaffes and awkward statements in American political history. Yet Harris has come pretty close to doing just that over her 14 months in office, with speeches and interviews given in just the past week that prove the point.

But one wouldn’t know it if their sole source of information was Harris’ team, who have reportedly said behind closed doors that they believe the veep has “really hit a stride in interviews” over the last several months:

HARRIS ON MSNBC — On Friday, Harris did something rare: She sat down for a lengthy one-on-one TV interview. Even though MSNBC’s JOY REID is largely simpatico with the VP’s politics, members of Harris’ team were concerned about the potential for things to go poorly — and were especially worried about getting a pointed question on the administration rescinding the Trump-era Title 42 policy blocking asylum-seekers at the border, since her docket as VP includes the root causes of migration from Central American countries. (Not to worry — the topic never came up.)

And despite some of Harris’ sit-down interviews causing a kerfuffle in the past (see: her chat last year with NBC’s LESTER HOLT, where her comments about visiting the border provided fodder for weeks of coverage), her team feels that over the last few months, she’s really hit a stride in interviews: get some moments that are memorable, but don’t cause days of dissection.

Let’s file this one under “You have got to be f—ing kidding me.” Seriously. I mean, what planet are these folks living on? The list of times Harris has demonstrated she’s in way over her head is so long that we can’t even come close to including them all here, but below are several examples:

KAMALA HARRIS: "For Jamaica, one of the issues that has been presented as an issue that is economic in the way its impact has been the pandemic…we will assist Jamaica in Covid recovery by assisting in terms of the recovery efforts in Jamaica that have been essential." pic.twitter.com/fmPJFTbKQ6

KAMALA HARRIS: "So I am here because this is a community in the Mississippi Delta that has a long history of being part of America's history, um, including having the needs that should be met…" pic.twitter.com/DZgDFSXdYO

“Ukraine is a country in Europe. It exists next to another country called Russia. Russia is a bigger country." pic.twitter.com/QYPLJ02mDy

After telling reporters that “Putin’s made his decision” to invade Ukraine, Kamala Harris says the threat of sanctions will “absolutely” deter him making the decision to invade. pic.twitter.com/Lgitgh7rOU

Quite a VEEP moment. pic.twitter.com/iyovcuA8kc

Why is Kamala Harris holding the cable the entire time while charging an electric vehicle?

"There's no sound or fume" pic.twitter.com/jxW5ovuRBB

If the issue wasn’t so serious, you’d feel okay laughing when you watch some of the above clips. But this is very serious – the woman is first in line to be president in the event something, God forbid, happens to Biden, and will be his heir apparent either in 2024 or in 2028.

And it’s not just the fact that she often seems like a deer in headlights when she does these events that is so concerning. I genuinely believe that at least 75% of the time she literally has no idea what she’s doing, that she’s just winging it – and it shows.

The Washington Post filed a report about Harris back in December that I think speaks to the crux of the problem in terms of what’s happening behind the scenes between her, her handlers, and her various other prep people. That report noted that people who used to work with her suggested she was a woman who leaves the important details of any assignment to staffers, while Harris herself goes before the cameras to bask in all the glory of her status and position and pretends she knows what she’s talking about.

And when it all falls apart? She blames her staffers:

Staffers who worked for Harris before she was vice president said one consistent problem was that Harris would refuse to wade into briefing materials prepared by staff members, then berate employees when she appeared unprepared.

“It’s clear that you’re not working with somebody who is willing to do the prep and the work,” one former staffer said. “With Kamala you have to put up with a constant amount of soul-destroying criticism and also her own lack of confidence. So you’re constantly sort of propping up a bully and it’s not really clear why.”

As I’ve said before, Harris is a considerable part of why Democrats are facing possible catastrophic election losses come fall. Though VPs don’t normally factor much into voters’ decisions about other candidates, the Biden White House has had her out front and center considerably more so than you normally see VPs because she’s a “historic first” and they want to make sure people believe they trust Harris to get the job done.

Sadly for Joe and company, trotting out Kamala Harris to score “woke” points has backfired in more ways than one, as their plummeting approval numbers make clear. The only question at this point is how much worse it will get for her – and them – as far as voters are concerned between now and November.

Kamala’s team is afraid to tell her the truth or she will blow up. Headline should read:

“Kamala Thinks She’s Doing Good Because Her Team Told Her So.”

What team! All of them left this listing ship!

That explains the revolving door.

I think her whole team are products of low expectations.

Compared to her, he does.

Actually, Daffy is incredibly comprehensible. It’s Donald that belongs in the Biden admin.

And Goofy ain’t goofy compared to her.

The old whacked out Daffy is way more fun than the later angry Daffy that seems the looney Tunes version of Donald Duck .

Do you think any person of the Democrats Propaganda Ministry or her staff has told her she sounds like a idiot?
I doubt it.

It’s incredible how so many living brain donors are democrats.

If she’s a donor, I don’t want to be a recipient? I’ll stay in the ground instead.

If a zombie ate her brain, it would catch the raging stupidity virus and die all over again.

They’re medical miracles: people with neither spine nor brain.

Maybe her ‘stride’ will take her out the door and gone.

her gross mismanagement of the southern border crisis

It isn’t mismanagement so much as deliberate destruction.

Either they’re whistling past the gravwyard, or they really believe it. If the latter, imagine how dumb she actually is.

Listening to her talk reminds me of a kid’s book report that is padded with so much fluff just to make up the word count. She is repetitious and redundant – and besides that, she repeats herself 😉

Especially if that kid DIDN”T READ the book and just the front cover!! But then we COULD be seeing the ACTUAL level of intelligence that she possesses! Frightening to think that SHE was AG for a REAL State!!

You mean you read the book for the book report? 😀

I doubt Harris even got the Cliffs Notes version.

You know, it wasn’t until my eyes hit on the word ‘Delta” again this morning that I finally figured out what is going on with Kamala.

Unlike previous hits, such as “Evita!” and “Hamilton,” “Kamala! Kamala! Kamala!” won’t be operatic. To emphasize Harris’s status as the Democratic Party’s First Black Yet Another Thing, it’s designed to be performed in an authentically black genre.

And that genre is the blues.

Compare this to her “passage of time” quote, her “long history” quote, and her “flank stake” quote.

She’s working on her memoirs in the form of a script.

You go, girl. They say the neon lights are bright.

Are salads public figures?
If not you might want to edit this article
(You’ve done a tremendous disservice to salad) 🙂

It shows as much as anything what poor judgment Biden has, in making the pick.

It justifies efforts to make policies of Biden/Harris fall flat. They are terrible policies made by people that pretend to know best. No skin off their backs, however.

Will Smith should slap her.

She wouldn’t even prepare for Willie Brown, and he dropped her for another Executive Assistant.

Which “team members” think so?

The holdovers that haven’t quit yet?
or
The new people that want to keep a job as long as possible even if it means cheerleading for bullshit?

“Why is Kamala Harris holding the cable the entire time while charging an electric vehicle?”

She’s hoping for the same kind of worldwide coverage George Bush got from marveling over a supermarket checkout scanner.

“How do I know that it’s working?”

Sorry, Kammy, if we had had more advance warning, we could have set it up to vibrate just for you.

Does she have a speech writer? She should! It feels like she’s making it up on the fly.

Lets be honest here…what else did anyone expect them to say? Its not like they’re going to tell you the truth is it?

Plus these messages are for the party faithful and not for anyone capable of rubbing two or more functioning brain cells together.

Here is a woman who knows why she was placed in the VEEP seat: being worse than The Hologram. She knows she is useless, knows she’s in way over her head, and knows she is completely inept at the job.

She’s scared, and it shows every time she opens her mouth.

I would think that Wille B was smart enough to keep her mouth engaged in other activities rather that talking! Maybe she would make sense if she spoke while sucking air IN!!

She is certifiable…almost as big an embarrassment to the United States as her boss puppet.