“So, I will say what I know we all say and I will say over and over again, the United States stands firmly with the Ukrainian people in defense of the NATO alliance,” Harris said during her DNC meeting speech, though Ukraine is not a member of NATO. 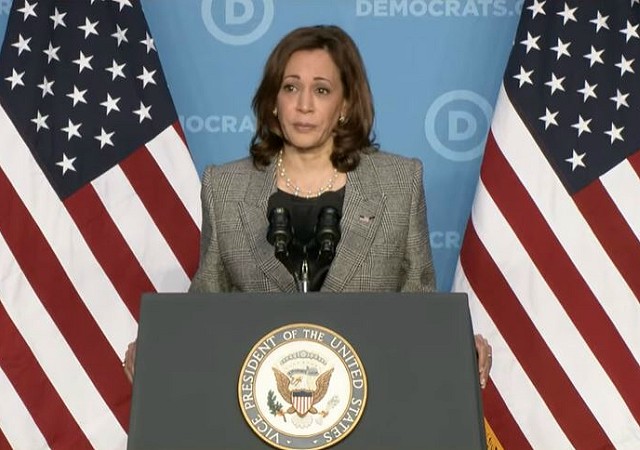 Unfortunately, Vice President Kamala Harris’ recent overseas trip to Europe, where she stood on the same stages as world leaders from Poland and Romania, was an absolute disaster from start to finish. Harris’ more notable moments were her nervous cackling when asked a serious question about the level of U.S. commitment to helping Ukrainian refugees and her devolving into incoherent word salads when she got in over her head.

Trey Yingst, a veteran Fox News foreign correspondent, reporting on the ground from the Ukrainian capital of Kyiv, even went so far as to describe Harris’ press conference with Polish President Andrzej Duda as “detached from the reality on the ground.”

But while Harris is now back home from her European tour, that doesn’t mean the embarrassment for the Biden administration as far as she’s concerned is over. As Legal Insurrection reported over the weekend, during the Democratic National Committee winter meeting in Washington, D.C. Saturday, Harris stood before her fellow Democrats and said that “the United States stands firmly with the Ukrainian people in defense of the NATO Alliance.”

KAMALA HARRIS: "So, I will say what I know we all say and I will say over and over again, the United States stands firmly with the Ukrainian people in defense of the NATO Alliance." pic.twitter.com/Ix1BY1BQ4G

The problem here is that Ukraine is not a member of NATO, though they have badly wanted to be. It’s also a significant source of contention for Russian president Vladimir Putin, who, as Axios pointed out, “demanded guarantees that Ukraine would never join NATO” while amassing Russian troops at their border earlier this year, “and invaded after the Western allies refused.”

In other words, as Joe Biden would say, “this is a big f***in’ deal” and it’s imperative that when the United States talks about it that they get it right.

Though Harris left “and” out of her remarks, Fox News added the word in one report they filed, leading to questions as to why they’d see fit to correct a mistake Harris had made, and one worthy of its report:

Fox adds in an "and" that wasn't there in the remarks. pic.twitter.com/Op0eTJoO57

As it turns out, the likely reason Fox News reported it that way is because that’s how it appeared in the official transcript on the White House’s website (bolded emphasis added):

Russia’s invasion threatens not just Ukraine’s democracy, it threatens democracy and security across Europe. And by extension, when democracy is threatened anywhere, it threatens us all. And the ocean that separates us will not leave us untouched by this aggression.

So I will say what I know we all say, and I will say over and over again: The United States stands firmly with the Ukrainian people [and] in defense of the NATO Alliance.

No reputable media outlet should rely solely on White House transcripts for quotes from elected officials, especially when the words appear within brackets, which means something was added in after the fact.

Also, there were videos galore circulating on social media that they could have used to figure out that “and,” a crucial distinction, is not what Harris said despite what was indicated in the transcript, which could only mean one thing: The White House altered the official transcript, which again is a story in and of itself.

In any event, whether the word was left out of the speech that was loaded onto the teleprompter at the time or Harris committed this faux pas all on her own, it’s still another terrible look for the Biden White House at a critical moment in the Ukraine/Russia conflict where our country needs to be putting its best foot forward.

Retroactive continuity. It is when a later story fails to match the continuity of a previous story. Writers use it to give themselves more freedom, but usually just make something suck.

They’re still trying, but you can’t make a silk purse out of a sow’s ear.

It is what made Annie Wilkes so cockadoodie mad about those dirty birdies and the chapter plays.

It’s a term that came out of the comic book world. When a title, like Batman or Spider-Man has been around for a while, sometimes new writers decide to change the origin story to be more up to date or something.

On a less technical level, it’s when everything that was true yesterday is suddenly gone because some hack thought it would be more convenient some other way.

I did not know either, thanks.

“So, I will say what I know we all say and I will say over and over again, the United States stands firmly with the Ukrainian people [and] in defense of the NATO Alliance.”

I think it was a careless flub.

And, it was a combination of flubs. First of all, for the sake of argument, I’m willing to believe that Cackles intended to use the word “and” where indicated between the brackets.

The more important flub is combining the two thoughts (i.e., (i) standing with the Ukrainian people, and (ii) standing in defense of NATO).

EVERYONE, except Cackles, knows that defending NATO nations is distinct from anything Ukraine. If Cackles intended to warn Russia to avoid at all costs expanding its military actions into NATO territory (which I wish she had been doing), she totally defanged the message.

I don’t care if it was a “flub” careless or not. Or whether the speech was written with the “and” in the statement. Or whether VP Giggles meant to use the word “and” and didn’t. (She can’t read a tele-prompter? Oh wait, neither can Pres. Shits His Pants so why expect any better from VP Giggles). In any case, the official transcript of the speech should reflect what was actually said. Not some mythical idea of what was meant to be said. It should reflect exactly what was said. Nothing more, nothing less.

At this point, why don’t they just DeepFake her and be done with it? I’m honestly not sure how it could be worse than the live version.

Seconded. Deep fake her, minus the cackle, tone down the nasal and I would be good.

Listening to her makes me wonder if I am having a stroke, Only half-way kidding.

I was thinking more like fingernails on a blackboard, but yeah.
.

The pornography makers have probably beat them to it.

Are we sure that hasn’t already happened? This could just be a software glitch in her program.

Remember when the left was outraged over the fact that President Trump deleted a tweet with a spelling error? They claimed it was illegal because his tweets were part of the presidential record. This would seem to be more serious as it alters the official record.

Of course it alters the official record. Of course such behavior is illegal. But if you haven’t noticed by now the law only applies to Republicans. democrats can do whatever they wish with no fear of any repercussion legal or otherwise for their actions.

No one will notice, care or hear about this. They’re busy on [anti] social media posting fake pics and turning in Putin puppets to the censors.

This is her second such flub in 2 weeks. Last one was lauding Ukraine for their desire to join NATO which was probably more inflammatory.

Since coming onto the national scene, when HASN”T she flubbed?

I’m on the other side of all this. I’m beyond pretending that the United States is some infallable entity that gets it right and even if we eff it up we need to pretend that better was expected.

Trump beating ISIS was an anomaly. For the past 20+ years name one big win….

We are not. We could be, be we aren’t. Biden as President and Kamala as VP are proof of how far we are from infallable. Do not depend on us, we will abandon and disavow you like a fart in the mall.

Do not bank your foreign policy decisions on the US being strong. Our biggest military accomplishment in the past 5 years is Biden’s promotion of a tranny. Two decades in Afghanistan and it’s cut and run like a dog shot in the ass. Hell I bank on the US being as evil as the Canadian government was to truckers… it’s really the only way of not getting royally screwed when the evil and stupid take charge. They are currently in charge. Govern yourselves accordingly.

Our allies should take a good hard look at this because you know damn sure their enemies are. Might be time for some ARs with extended mags to be passed out elsewhere. Also might not be a bad idea from some anti-tank planning else where too.

I would no sooner ascribe any percentage of voters to be this dumb than I would ascribe any large percentage of the GOP to be dumb for Romney being the candidate in 2012… but a good number of them are THAT DUMB and that’s enough to constitute a majority.

Life is hard and it’s harder when you’re stupid. Learn a lesson from the pain of stupid or don’t. The beatings will continue till you do.

The destruction of western society is intentional. Our government is owned by the same masters that own our allies.
Whoever they are, they aren’t stupid.

In Pierce County Washington this past week 2 SWAT officers were shot by a 9 time violent felon who failed to show up to court. One of the officers has died.

Not only was this 9 time felon out on the street causing mayhem, he’d been arrested and was released on a promise he would show to court. For years I’ve wondered if this sort of government were sheer stupidity or by design.

It’s clear to me now that it’s by design.

The Wa State AG is lynching several cops right now for shooting or physically restraining shit bags like this when responses get sideways (because the perp is VIOLENT AS HELL). This is very much by design.

What a scummy low-life her husband must be to have married her.

Transcripts are my favorite way to know what the politicians say, up to this administration they were verbatim, but only in the last couple months they are changing words.

She is truly a dumb whore who sucked her way (almost?) to the top. She puts a whole new spin on the “peter principle.”

Most amazing is the power that her ‘john’ Willie Brown had in California to cover for her all these years while he enabled her in high office inside California.

All this time, we are told blacks have no power or influence in our culture of white supremacy.

How black is Kamala really? At least with Obama we didn’t have to be told that he was partly of African descent.

“We have never been at war with Kamala Harris.”

Another complete embarrassment for the US. The incompetence of this Administration is mind blowing.

Look their is so much wrong with this affirmative action VP, I’m not going to dump on her for a linguistic miss that I’m sure Conservatives might make. I do think that she should be fixed with a shock collar to be activated at every giggle. Train that right out of her. Similarly, one on sleepy Joe for every time he creepily whispers or sniffs hair. We will get these people LOOKING presidential if not anything else.