“The tensions come amid a terror wave that claimed the lives of 14 people and as the one-year anniversary of the Gaza conflict approaches.” 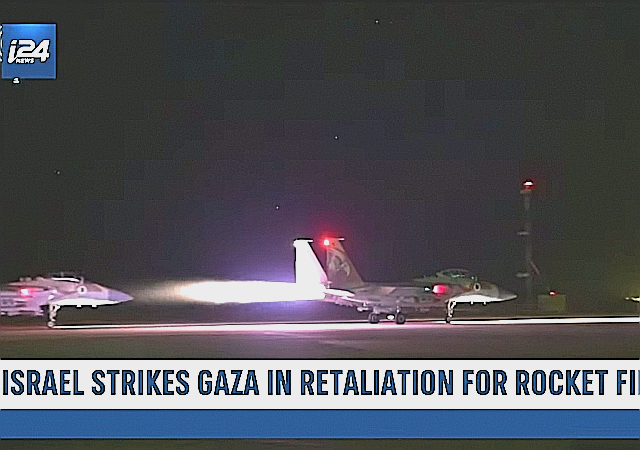 The Israeli air force struck a weapons factory in the Hamas-controlled area hours after a rocket was fired from Gaza.

“Earlier tonight, a launch was detected from the Gaza Strip and intercepted by the Iron Dome Aerial Defense System,” the Israel Defense Forces (IDF) said in a statement obtained by the Legal Insurrection. “In response to this attack, IDF fighter jets struck a Hamas terrorist organization weapons manufacturing site in the Gaza Strip,” the statement added.

The rocket attack from Gaza came a day after Palestinians used Temple Mount loudspeakers meant for prayer calls to urge Hamas to target Israel. The Passover festivities in Jerusalem were marred by widespread violence against Jews by Palestinian mobs. On Sunday, at least five Jews were hurt by stone-pelting Palestinians on the Temple Mount.

The Hamas rocket was intercepted by the Iron Dome missile-defense system over southern Israel. The Israeli equivalent of the Red Cross “Magen David Adom said there were no reports of injuries following the rocket attack,” The Jerusalem Post confirmed.

The Times of Israel reported the IDF’s response to Hamas’s rocket fire:

The Israeli military struck targets in the Gaza Strip after midnight on Tuesday in response to a rocket fired from the Hamas-controlled enclave hours earlier.

The rocket attack was the first in nearly four months, ending one of the longest periods of quiet on the Gaza border in years. The Israeli military said in a statement that it bombed a number of targets, including a site used by Hamas to manufacture weapons.

Hamas-affiliated media reported that the Israeli airstrikes targeted a site operated by Palestinian factions west of Khan Younis in the southern Gaza Strip.

The IDF operation takes place against the backdrop of surging Palestinian terror and rioting amid the Muslim fasting month of Ramadan. “The tensions come amid a terror wave that claimed the lives of 14 people and as the one-year anniversary of the Gaza conflict approaches,” the Israeli TV channel i24News noted.

Tuesday’s IDF airstrike destroying Gaza weapons factory highlights Hamas’s efforts to rebuild its arsenal since the last armed conflict almost a year ago. In May 2021, Hamas, Palestinian Islamic Jihad, and other terrorist groups fired more than 4,000 rockets aimed at Israeli towns and cities. The IDF responded by targeting terrorist infrastructure in Gaza, including terrorist bases, weapons depots, and terror tunnels.

Israeli analysts fear that Palestinian rioting on the Temple Mount could be a prelude to Hamas’s all-out terror attack against the Jewish State. “It’s only a matter of time before Gaza throws its hat in the ring,” Israeli commentator Dana Ben-Shimon predicted in her Tuesday column in the Israel Hayom newspaper. “The terrorist organization wants to be at the center of attention and is exploiting the events on the Temple Mount to that end,” she cautioned.

No mercy for goose-stepping, Muslim supremacists/terrorists/fascists and the utterly vile European, Leftist dhimmis and American Dhimmi-crats who support and enable them.

Which should be met with an all out thermetic weapons, say targeting 1/4 of territory controlled by Hamas. Base3d on their history, it will take at least that much to get their attention.

Somewhat off topic: Violence is the Muslim way. A Danish-Swedish politician has burned the Koran, and Muslims in Sweden have been violently rioting over that for the past week. Yet Muslims had no qualms desecrating the Jewish holy site of Joseph’s Tomb recently with no provocation at all.

It is foolish for anyone in the west to allow Muslims to enter their countries, furthermore it would be prudent to kick out any already present. Islam is innately racist, totalitarian and subversive.

Kicking Moslems out of the USA would be illegal and unconstitutional.

The Israeli air force struck a weapons factory in the Hamas-controlled area hours after a rocket was fired from Gaza.

Good. For every rocket fired into Israeli territory by a moslem terrorists a site (military or otherwise) should be targeted in Hamas controlled territory and destroyed. If they want to play these games then by all means let them. But make the consequences such that they might think that doing such things is a bad idea.

For which they should expel the Grand Mufti of Jerusalem (Muhammad Hussein), remove all moslems from the city, and deny them access to Al Aqsa and the Noble Sanctuary and inform them that access to the site will be contingent on the good behavior of moslems (eg. no more rockets fired into Israeli territory, loudspeakers to be used for calling faithful to worship and nothing else etc, etc.). And if they can’t abide by that then that’s it. No access allowed.