Prime Minister Bennett: “All security systems are now being employed to restore security to the citizens of Israel.” 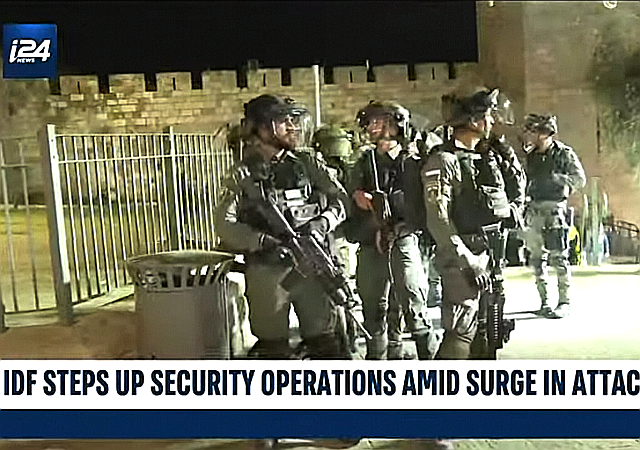 The surge in terror attacks coincides with the Muslim fasting month of Ramadan, which began on April 1. At least two of the attacks were carried out by terrorists linked to the Islamic States (ISIS).

The Israeli security forces were being mobilized to counter the rising wave of Palestinian violence and terror. “All security systems are now being employed to restore security to the citizens of Israel,” Prime Minister Naftali Bennett said on Tuesday.

At least 10 terrorist attacks in Israel have been prevented in the last two weeks, IDF Chief of Staff Lt. Gen. Aviv Kochavi said Monday evening, speaking at a ceremony honoring the new commander of the Israeli Air Force.

“We will get to every neighborhood, every street, every home or basement in order to get our hands on the terrorists. We will operate everywhere, using every method, to stop the wave of terrorism,” Kochavi said.

The remarks come amid a wave of Palestinian rioting, the newspaper added:

The rioting erupted as the heavy contingent of police deployed at the gate were attempting to allow crowds of Muslim worshippers to hold Ramadan prayers at the Temple Mount. Clashes emerged at Damascus Gate, with rioters making inciting against Israel. A small group of rioters shot off fireworks and threw bottles and rocks at the police.

Last year’s Ramadan festivities were also marred by widespread Palestinian rioting and attacks on Jews in Jerusalem and other Israeli cities. The weekly Ramadan prayers on Jerusalem’s Temple Mount are often used to incite violence against Jews and Israelis.

Last week, the IDF chief also warned of more terrorist attacks on Israeli civilians and the Jewish communities abroad. “There is a fear that the imitation effect will lead to attempts to harm Israeli and Jewish targets around the world,” Lt. Gen. Aviv Kohavi said on Thursday.

Monday’s remarks made by the IDF chief echo the threat assessment issued by the Israeli police. The security forces were gearing up for more violence in the coming weeks, a senior police official disclosed.

Israel Police is bracing itself for a series of commemorative dates throughout April and May that could potentially spark nationwide chaos, a top-brass police officer told Ynet on Monday.

“The police is on very high alert of these events”, Bar-Tzvi said. “We’re trying to create maximal presence throughout the country, especially in potential flashpoints to answer for any scenario.

Our policy as law enforcement is to create as little friction as possible during protests and even during riots like around the Damascus Gate. The order passed down to the commanders on the ground is to try to contain such events and avoid arrests. However, the commander on the ground has full backing to act as they deem fit in the face of such riots…”

As Ramadan began, Palestinian rioters armed with stones clashed with the police in Jerusalem, the Israeli media reported Tuesday. The violence surges as thousands of Muslim worshipers converge on the Holy City to pray at the temple mount.

The Times of Israel, on Tuesday, reported the latest round of Palestinian violence:

Police say eight Palestinians have been detained during clashes at the Damascus Gate entrance to Jerusalem’s Old City, as Palestinians gather to celebrate Ramadan.

Police say the suspects hurled stones and other items at officers. They add that some of the rioters were also involved in unrest last night as well. It is the third night in a row of clashes at Damascus Gate.

“Whoever chooses to disturb the order, riot, and engage in violence of any kind, harms first and foremost the large public of worshipers, merchants, and visitors, the vast majority of whom wished to celebrate Ramadan in peace and security, while maintaining freedom of worship,” police say in a statement.

A massive rocket offensive followed last year’s Ramadan rioting and pro-Hamas demonstrations in Jerusalem by the Gaza-based terrorist groups. They fired over 4000 rockets on Israeli towns and cities in two weeks. The relentless rocket barrages only ended when the IDF launched a counter-terrorism operation that destroyed Hamas’ ammunition dumps, attack tunnels, and terrorist infrastructure spread across Gaza.

Thwarting is the best way to go. But in order to do that a country must first have border control.

There needs to be DMZ zones around the perimeter of the hostile areas, those schould be created at of their territory, and widened until they are contained or completely eliminated. As now, they could avoid this by stopping all hostilities, but if they insist on continuing those hostilities, then they deserve ongoing harsh attitude adjustments.

We could use some of that Israeli wisdom here.

Israel and its allies need to undertake a serious and well-funded campaign to combat/dispel Muslim supremacists’/terrorists’/Dhimmi-crats’ vicious and dishonest propaganda mythologies that attempt to erase Jews’ historical ties to Israel — ties which pre-date the founding of the ideology of “Submission” by millennia — by casting Israeli Jews as alleged colonial usurpers of land claimed by the “native” Arab Muslim, so-called “Palestinians.”

Successfully combating Muslim supremacist/terrorist/Dhimmi-crat propaganda and its cultural genocide against Jews is as important as running effective anti-terrorism operations.

A successful campaign for Israel can’t be based on lies and bigotry but on the legitimate claims of Israel and her people which have little to nothing to do with Islam and Muslims being bad.

It is ironic that clearly inferior people, in nearly all aspects, believe that they should rule. It is important that we hold these losers in check, otherwise we would find ourselves in a new dark age.

Could we please note that Israel has done this without sacrificing civil society to the national security state as we seem to be doing?

We do not suffer from more terror attempts than Israel why do we keep the Bush era authoritarian rollbacks to our freedoms?

Israel is right about most things, an exception being their handling a war with kid gloves. There is a reason that not even other Arabs have any use for these people.

Please reread the article if you have doubts Israel is doing things correctly.

Israel should do what it has to do when it has to do it against terrorists and Iran, their enabler, regardless of what the woke world and Biden say and think. The Israeli coalition is tottering right now and Neyanyahu could be back in power with a center right coalition

https://www.nytimes.com/2022/04/06/world/middleeast/idit-silman-israel-coalition.html
Bennett and Lapid’s coalition of mutual self convenience may very well be on the rocks