Palestinian rioters on Temple Mount chant: “We are all Hamas.” 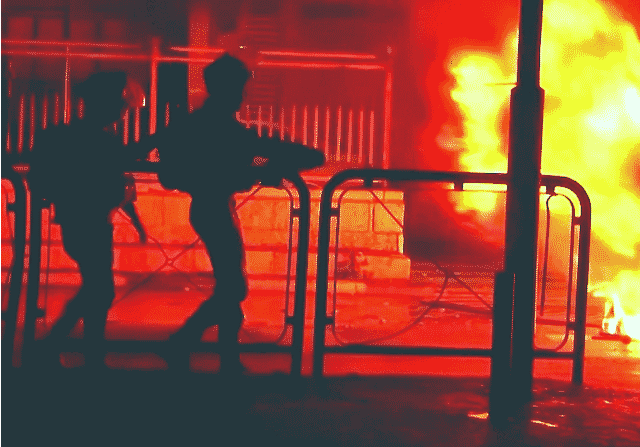 Palestinians rioting is on the rise in Jerusalem as the Muslim holy month of Ramadan enters its fourth and final week. On Friday, the rioters raised the flag of the Islamist terrorist group Hamas on the Temple Mount, one of the most holiest sites for all Abrahamic religions.

The fresh wave of Palestinian violence erupted after the Friday Muslim prayers on the Temple Mount. “At least 205 Palestinians and 17 officers were injured” in the overnight rioting, Reuters reported.

The newspaper Israel Hayom, on Saturday, covered the overnight rioting:

Tension has mounted in Jerusalem and the West Bank during the Muslim holy month of Ramadan, with nightly clashes in east Jerusalem’s Sheikh Jarrah – a neighbourhood where numerous Palestinian families face eviction in a long-running legal case.

It was unclear what sparked the violence, but the protest soon escalated into riots and clashes as thousands of Palestinians faced off with several hundred security forces.

“We will respond with a heavy hand to any violent disturbance, rioting or harm to our officers, and will work to find those responsible and bring them to justice,” the Israel Police said in a statement.

Describing the Palestinian incitement ahead of full-blown rioting, the prominent Israeli columnist Caroline Glick wrote: “Thursday night the riots in Sheikh Jarrah began in earnest with Arab mobs setting fire outside Jewish homes and assaulting Jewish residents of the neighborhood. Earlier in the week, the Palestinians launched their political warfare campaign to demonize Israel.”

Since the month of Ramadan began on April 13, Friday prayers have been accompanied by attacks on Jews and clashes with the Israeli police in Jerusalem.

“We are all Hamas,” the angry Palestinians on the Temple Mount chanted following the prayers. “Muslim worshipers visiting the Temple Mount in Jerusalem’s Old City in light of Ramadan’s last Friday prayers, were seen waving Hamas flags,” the Jerusalem Post reported.

The Ramadan rioting is often followed by a barrage of Hamas rocket fire on Israeli towns and cities. The “prayer-goers” called upon Hamas to fire rockets at Tel Aviv.

Hard to believe they respect the sanctity of such a holy place with this behavior. pic.twitter.com/dxNUjJnL10

The Times of Israel reported the ugly incident on the Temple Mount:

Palestinians waved Hamas flags during Ramadan prayers on the Temple Mount in Jerusalem’s Old City, where tens of thousands of worshipers gathered for the last Friday of the Muslim holy month.

Video showed throngs of people on the compound, some of whom were waving the green flag of Hamas, the Islamist terror group that rules the Gaza Strip.

Some worshipers also reportedly chanted in support of Hamas and called for it to carry out attacks on Israel.

“We are all Hamas, waiting for your orders commander Mohammed Deif. Hamas — shoot a rocket at Tel Aviv tonight,” they were quoted as chanting by Channel 13 news, referring to the head of the terror movement’s armed wing.

Right now on the Temple Mount:

Palestinians showing their respect for the sanctity of their 3rd holiest site by starting a riot. pic.twitter.com/VfYccM1jNT

While violent Palestinian gangs attack innocent Jews on the streets of Jerusalem and clash with the Israeli police, President Joe Biden’s administration urged “all sides” to “exercise restraint, refrain from provocative actions and rhetoric.” It is unclear if “all sides” include the ruling Mullah’s of Iran, with whom the Biden White House desperately wants to cut an Obama-style nuclear deal.

The Ramadan violence coincides with the Iran-sponsored Al Quds Day, or the Jerusalem Day, an event that is marked by anti-Israel and antisemitic demonstrations across the world, including western countries.

Iran’s ruler Ayatollah Ali Khamenei, who is also the “spiritual” leader of over 200 million Shia Muslims, told his followers that Israel was “not a country, but a terrorist base.” It was their “public duty to fight against” the Jewish State — the only democracy and free society in the Middle East, he preached on Friday.

Before anyone is allowed to purchase a phone, they must pass a class in video photography. Common sense phone control.

Why they’ve put up with this crap for so long is beyond me. But it’s well beyond time for the Israeli government and military to take off the kid gloves and deal with the Pali terrorists once and for all. Ignoring the problem and allowing it to fester certainly hasn’t been to the benefit of Israel.

Overlapping and convergent modes and interests.

Yes, that crossed the Rubicon.

(For Le Bron James-level dummies: the Rubicon is not a nighclub, a rap singer or an ice cream flavor. Read, if you can: https://www.thoughtco.com/meaning-cross-the-rubicon-117548)

But those Jan 6 “rioters”, oh they will rot in hell

Palestinians trying to get back their mojo. Other Arabs are yawning, and non-Arabs have become awake to the hustle. Though they invented the modern use of political violence, they have been outdistance by others, so now they adopt the old tactic. If they wanted dignity and success, they could have it in a flash. Their worst enemy are themselves.

No differen than the BLM movement, the leaders of which are the worst enemies of American blacks.

Other Arabs are not yawning. They are supporting the rioters. All the Arab countries that are supposedly at peace with Israel — Egypt, Jordan, the UAE, Bahrain, they’re all piling on against Israel for daring to “brutally suppress” the rioters, as if 17 wounded police are not enough and they should just let the Arabs destroy and wound and kill as they like.

And they’re outraged that the Israeli courts, after literally decades of litigation, have finally authorized a property owner to evict Arabs who have been squatting on its property for over 50 years and have refused to give any reason why they should not be evicted.

Eviction needs to be from the region, not just property. Also, 50 years worth of rent and compound interest should be taken from their assets.