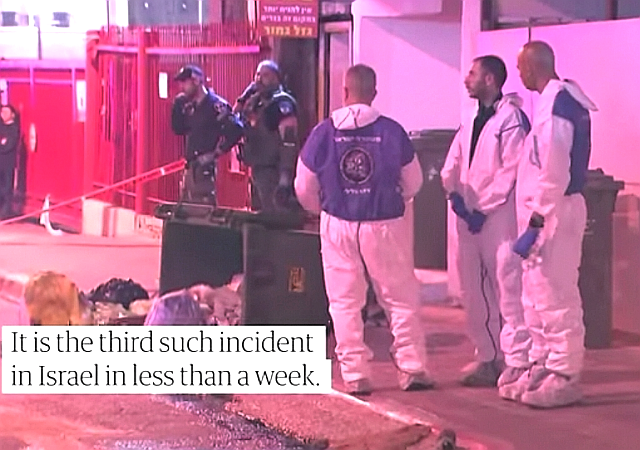 A Palestinian terrorist killed five people as he opened fire on passersby in the city of Bnei Brak, home to a large Jewish Orthodox community east of Tel Aviv. Tuesday night’s massacre makes it the third terror attack and the second mass shooting to hit Israel in eight days.

Two of the victims, aged 23 and 32, were Ukrainian nationals shot dead outside a grocery store. The two other victims, identified as Israeli citizens aged 30 and 36, also died at the scene.

The fifth fatality, a 32-year-old Christian Arab policeman, died later of his injuries in the hospital.

Israeli news reports said that the attacker was identified as a 27-year-old illegal Palestinian immigrant who had previously served a 6-month sentence for a terrorism-related offense.

Last Tuesday, a convicted ISIS terrorist killed four Israelis, including women and the elderly, and injured several others in a car-ramming and stabbing attack in the southern Israeli city of Beersheba. On Sunday, two ISIS-linked gunmen killed two Israeli border guards, both aged 19, in the northern Israeli city of Hadera.

The Palestinian terrorist went door to door in Bnei Brak, trying to find a family to murder.

He was eliminated before he could continue this campaign of mass murder. pic.twitter.com/06gfmtaJ89

At least five people were killed in a terror attack in the city of Bnei Brak, just east of Tel Aviv – the third in a week.

A Palestinian resident of the Jenin area in the northern West Bank, who was in Israel illegally, arrived in Bnei Brak on a motorcycle.

He was equipped with an M-16 automatic rifle and was shot and killed by a police officer, on the scene.

The attack took place soon after 8 pm when the streets were full with shoppers and pedestrians going about their business.

MDA medic Lipa Hirsch, who treated the wounded, said he and his team arrived quickly on the scene. “We heard the shots from the MDA station and went immediately in the direction of the gunfire,” he said. “On Herzl Street we noticed a 30-year-old man lying unconscious. He was without a pulse with gunshot wounds. We performed a life saving procedure but we were forced to declare him dead,” he said.

“About 100 meters away, further down the street, we saw a 40-year-old man unconscious with gunshot wounds to his body. Another MDA team that arrived at the scene provided him with medical treatment and evacuated him to Beilinson Hospital in critical condition.”

From the scene of this evening’s terror attack in #BneiBrak, just outside Tel Aviv. Bnei Brak is a heavily Orthodox Jewish community.pic.twitter.com/65E262K0ac

The gunman was praised for his “heroic” act by the Gaza-based terrorist group Hamas. The Jerusalem Post reported:

Hamas praised the attack in a statement on its website. “Responding to the crimes and terrorism of the occupation is a legitimate right for all our people until the occupation is removed from our land,” it said.

The Islamic Resistance Movement (Hamas) blesses the heroic operation against the Zionist occupation soldiers in the so-called ‘Tel Aviv’ area, which led to the killing and wounding of a number of Zionist occupiers, and stresses that all the heroic operations carried out by our Palestinian people, in every inch of our occupied land, comes in the context of the natural and legitimate response to the terrorism of the occupation and its escalating crimes against our land, our people and our sanctities.”

You will have seen the faces of two victims of the terror attacking in Bnei Brak tonight. Three more victims will be named in the coming hours.

Meanwhile in Jenin these are the scenes of ‘celebration’ at their murders… pic.twitter.com/sWlOijCEGS

They attack just before Ramadan so when Israel responds they can say, “Israel attacked us during our holy day.”

Just attack back – harder. Forget appeasing anyone, especially leftist LBTQRSOULNLYWEJGLS+DISNEY freaks all gung-ho to go to war with Russia (as long as someone else does the dying).

Since the innocent deceased were not known to the heathen murderer, make it a new policy to pick ten random families and destroy their homes, for EACH victim.

When is the time to fight back?

I hope these cells get crushed and the people cheering get AIDS from humping their camels.

This is what happens when terrorism is appeased

EVERY Israeli should be armed, 24/7, from the day their hands are large enough to hold a firearm.

Btw: this is coming to America. Of those millions of mystery immigrants Biden’s puppeteers have let into the country, there are thousands of these crazies – that Supremely Dumb Justic Brown-Jackass will change laws to protect.

They murder innocents and pass out candy to celebrate.