The Israel Defense Forces responds to the terror wave with Operation “Wave Breaker.” 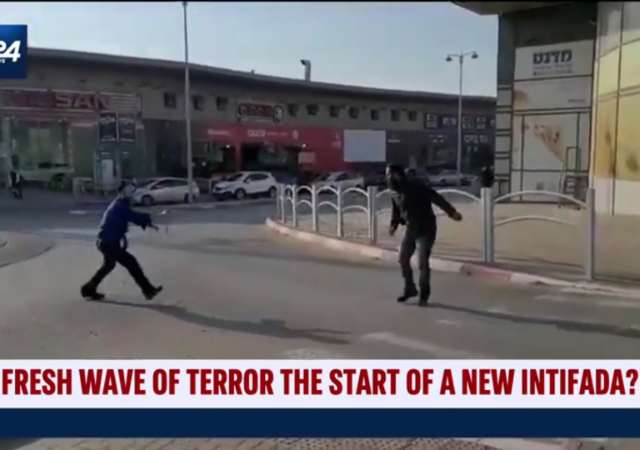 Israel is in the grip of a terror wave as the country witnessed four attacks within a week, killing 11 people. The latest attack took place on Thursday when a Palestinian terrorist on a bus stabbed an Israeli several times before an armed passenger took him down, the Israeli media reported.

The week-long wave of Palestinian terror attacks comes ahead of the Muslim fasting month of Ramadan, which begins next weekend. As Ramadan approaches, the Israeli military warned of more terrorist attacks aimed at Israelis civilians and Jews across the world.

“There is a fear that the imitation effect will lead to attempts to harm Israeli and Jewish targets around the world,” Israel Defense Forces chief Aviv Kohavi told the country’s TV network Channel 13 on Thursday.

The terrorist – a 30-year-old Palestinian from the West Bank city of Bethlehem – was neutralized shortly after the attack (…).

According to Magen David Adom [Israel’s equivalent of the Red Cross], the attack occurred around 09:10 am at the settlement cluster of Gush Etzion. Paramedics who arrived at the scene treated the wounded man, 28, on the spot before evacuating him to Shaare Zedek Medical Center in Jerusalem for further treatment, while fully conscious. (…)

The Shaare Zedek Medical Center, said: “A wounded man from the stabbing attack in Gush Etzion was taken to the trauma unit in a serious condition. “The 30-year-old man suffered stab wounds to his upper body and underwent initial evaluation and stabilization in the trauma unit before being transferred to the operating room.”

Prime Minister Naftali Bennett urged Israelis civilians, especially those in possession of arms, to protect their communities and the country. “Keep an eye open. Whoever has a gun license, it’s time to carry the gun,” Prime Minister Naftali Bennett said on Wednesday. “We are also currently evaluating a larger framework to involve civilian volunteers who want to help and be of assistance,” he added.

🚨 Yet another terrorist attack in #israel:
A Palestinian terrorist stabbed an Israeli civilian with a screwdriver on a bus in Gush Etzion area.
The injured civilian was evacuated to a hospital for medical attention. pic.twitter.com/p9aUvAX42f

The Israeli military responded to the resurging terror wave with a counter-terrorism campaign dubbed Operation “Wave Breaker.” Israel beefed up the police presence in Jerusalem while security forces combed Palestinian cities, rounding up suspected terrorists affiliated to the Islamic State and other terrorist groups.

“Forces from the IDF, Shin Bet and Israel Police conducted a widespread arrest campaign throughout the West Bank in the Balata refugee camp in Nablus, Bethlehem, Kedumim, Ramallah, Marda, Yabad and villages south of Bethlehem,” The Jerusalem Post reported Thursday.

The Israeli TV channel i24News reported the ramping up of security in wake of Ramadan celebrations:

Security has increased in Israeli cities and in the West Bank with Defense Minister Benny Gantz ordering the deployment of 1,000 troops to reinforce police.

A total of 3,000 police will be stationed at flash points in Jerusalem for the start of the Muslim holiday of Ramadan when hundreds of thousands of worshippers are expected to ascend to the Al Aqsa Mosque compound on the Temple Mount for prayers.

“Israel has arrested 43 suspects with alleged links to the Islamic State terrorist group in the wake of two deadly attacks in Be’er Sheva and Hadera by men affiliated with ISIS, according to Hebrew-language media reports,” the i24News noted in a separate reported.

IDF announces operation "Breakwater" aimed at curbing the string of terror attacks in Israel and the West Bank. Overnight, 31 suspects were arrested, the military says. pic.twitter.com/3tSgNbQGuC

With Blood On Israel’s Streets, Pro-Palestinian Groups in NY Call For 3rd Intifada

As Israel suffered the highest weekly death toll since the terror campaign of the Second Intifada 16 year ago, Palestinian groups gathered in New York calling for a new Intifada. Hundred of pro-Palestinian activists gathered outside Grand Central Station chanting ‘Intifada until victory’ and destruction of Israel ‘From the river to the sea.’

The demonstrators gathered outside Grand Central Station in Manhattan, while a small group of pro-Israel counter-protesters assembled across the street, bearing Israeli flags and signs with the images of the 11 Israelis killed in terror attacks in the past week.

The pro-Palestinian group then marched through midtown Manhattan, stopping at the offices of Israel-linked groups including Friends of the IDF, the Central Fund of Israel and Ateret Cohanim.

They bore signs that read “Intifada until victory,” “We will free Palestine within our lifetime” and “Resistance until return.”

The protesters chanted, “From the river to the sea, Palestine will be free,” “Resistance is justified when people are colonized,” “New York to Gaza, globalize the intifada” and “There is only one solution — intifada revolution.”

A thousand Israelis were killed and several thousands maimed in Palestinian terrorist attacks and suicide bombings during the Second Intifada which took place between 2000 and 2005. Hundreds of Israelis died in the First Intifada terror wave (1987 and 1991).

Gee.
This is the same thing they told teachers when terrorists started hitting classrooms.
What did we tell teachers? “Hide under desks. Cower in place.”
Whose advice worked?

Over and over, groups of innocent victims were killed in terrorist machine-gun attacks. Police were rarely in the right place to stop them. Then Israel found a way to make such shootings extremely rare: permit law-abiding citizens to carry handguns.

…when three terrorists in Jerusalem tried to machine-gun a crowd in 1984, they managed to kill only one victim before being shot down by handgun-wielding citizens around them.

Israeli criminologist Abraham Tennenbaum reports that when the surviving terrorist was interviewed by the press, he “complained that his group had not realized that Israeli citizens were armed,” and so the group’s plan to “machine-gun a succession of crowd spots… before the police or army could arrive” failed.

Israel’s constitution protects no “Second Amendment” right.
Ours does. Theoretically.
What’s wrong with this picture?

Not just theoretically. Israel has strict gun control, and recognizes no right to be armed. Gun licenses are strictly at the government’s discretion. In the “territories” that means the Defense Minister.

This is the first time I can recall a PM saying something like this. It’s a great improvement on what came before, but Israel needs a bill of rights that recognizes and enforces the freedom of expression and the RKBA.

The Ukraine and now Israel have just proven the founders wisdom of the Second Amendment for America.
The great importance of the natural Right to Keep and Bear Arms can not be ignored by civil disarmament proponents, all thought they will still try to attain their Marxist utopia.

I had an interesting conversation with an Israeli years ago. He asked why Americans feel the need to own guns. I explained for self defense, home defense, etc. He responded, “Yes, but why do you need to own them?” I gathered that in certain situations such as in the disputed territories the people who are permitted to carry weapons don’t own them. They’re issued them by the government.

They’re army weapons. Which means the army can take them back whenever the Defense Minister feels like it, regardless of the danger the holder is in. And Israel has a long history of defense ministers who are actively hostile to the Jewish residents of the “territories” and would like nothing better than to see them live in fear.

I hear Israels walls are crap, cars can drive through.
They need BiBi back

Bennett is doing no worse a job than Netanyahu did, or would be doing now. Netanyahu is now blaming the presence of Ra’am in the government, but he offered to include Ra’am in his government too.

Should we forget how much worst it was two decades ago? Israel appears to have reduced what had been a war level of successful terror attacks down to a number of terror attacks that could easily be interchangeable with a European country.

I also have not seen Israel’s ambassador to the UK summoned to give an explanation, or threats from the French Foreign Ministry, or boycott calls from Ireland and Biden has not reacted by demanding 1967 lines.

I’m not saying all is well I just think we should remember exactly how successful Israel has been in improving its position.

If only the Palestinian leadership wanted to do the same and negotiate in good faith but till then we should admire what Israel has done for itself.

Hebrews all over the world need to start packing.

And go where? Most of the USA is still a safer place than Israel, and has stronger civil liberties and a more honest judiciary.

Yeah, I misunderstood him, too.

I didn’t. Shouldn’t all Americans understand that when they’re told, “It’s time to start packing” it means to walk heavy. I take issue with the American urban dictionary.

“walk heavy
slang To act, behave, or carry oneself in a deliberate, self-important, or self-assured manner. Most common in African-American communities.
He thinks he can walk heavy around here now that he’s gotten that fancy job of his.
You gotta walk heavy if you want to make a name for yourself around here.”

This whitewash A) ties the term walking heavy to the “African American “community? and B) walking AS IF you are carrying the artillery to back up your words. But you don’t, according to this whitewashed definition. But still, AS If!

As if. See how long you last if you aren’t actually.

When you tell a Jew to start packing, it means it’s time to move out of here.

I was going to say packing iron, but not only did you beat me to it, but you also included polymer, titanium and aluminum.

And the bloodthirsty savages are heard from – again.
.