CNN: Biden’s Approval Is Lower Than Trump’s At This Point In His Presidency

CNN: Biden’s Approval Is Lower Than Trump’s At This Point In His Presidency 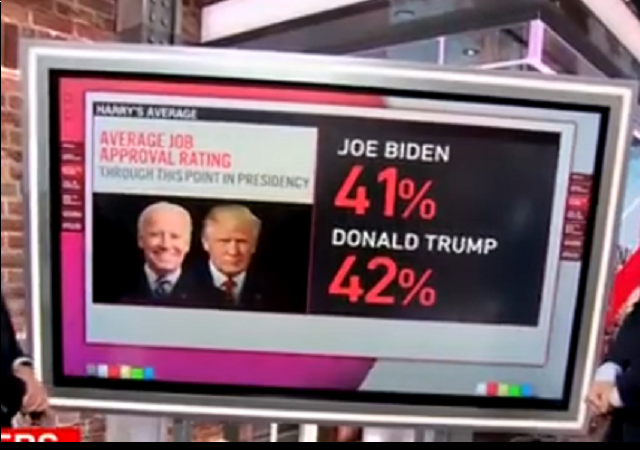 Joe “I am the Democratic Party” Biden’s numbers are cratering, and he’s dragging down his entire party.  It’s so bad that even CNN, usually Democrat cheerleaders and fanbois, are taking note.

Even with multiple trillion dollar industries shilling, spinning and lying for him, at this point in his presidency Joe Biden has the lowest approval rating of any president in recorded history. pic.twitter.com/pqrepvFkUI

CNN’s Harry Enten outlines new polls from Quinnipiac and NBC showing that Joe Biden has a lower approval rating than Donald Trump did at this point in his presidency, breaking Trump’s record for lowest ever recorded.

“Joe Biden at this point, minus 23 points. That is the worst on record since they started asking about economic job approval ratings back in 1978 with Jimmy Carter,” Enten said.

Given the media cover the Biden administration has received, particularly with regard to the Hunter Biden scandals that implicate “the big guy” and with inflation first “transitory” and now “Putin’s,” it’s quite astounding that Biden’s numbers are so abysmal.

It’s also worth noting that the comparison between President Trump’s approval and the Biden numbers is an unfair one given the horrific treatment of President Trump by the Democrat propagandists in the media (not the least of which was the Russia, Russia, Russia lunacy that ended up being completely false . . . and they all knew it all along).

Not only did the media and Democrats hammer Trump with false accusations and partisan witch hunt impeachment proceedings (twice), but they failed to report on his many outstanding successes and accomplishments. The media malpractice during Trump’s first term was jaw-dropping, and it’s quite stunning that, with all Trump had working against him, his numbers didn’t dip lower.

While Trump was buoyed even through the most outrageous attacks by the solid support of a huge base who did not believe the lies being told about him by Democrats, the media, or the deeply-embedded Executive branch/civil service “resistance,” Biden has no base that will keep his numbers from hitting rock bottom.

Have Democrats noticed the difference between the way Trump was battered and unfairly assailed with lie after lie and how Biden is given pass after pass for his incompetence, fecklessness, and inability to do his job. Do they understand that Biden has not relentlessly been called a liar, a puppet of foreign governments, an authoritarian, or a racist (though, arguably, he’s all those things), and he has not been impeached (twice), yet his numbers are this low? He doesn’t need 24/7 the “walls are closing” breathless “reporting” from the CIA and FBI via their slack-jawed media lackeys. Biden has earned his historically low approval ratings with his astoundingly bad policy, policies that undermine America and Americans at every possible turn.

There is no indication at all that Biden is going to move to the center or consider America first rather than dead last. Because of this stubborn refusal to accept the profound rejection of his policy and outcomes and to switch gears, Biden’s numbers may well hit the 20s or even the teens. That number would reflect the tiny segment of the population he is attempting to please by infuriating, embarrassing daily, and causing great economic pain and hardship to the rest of us.

Supply is the bane of any attempt at a command economy. No executive decree can make more fuel, or any other commodity, magically appear.

Which tends to be rather problematic when said executive basically orders people to lose money on supplying said commodity.

Most votes ever in history.
Yeah….

What a complete crock.

Trump is probably twice as popular as Biden was at this point in his presidency.

It’s dishonest to compare these two statistics. Trump was doing a great job while being subjected to non-stop hoaxes and lies from both parties and the polling was biased. Biden couldn’t be doing a better job destroying every aspect of America while being supported non-stop by the media, Hollywood and with little if no real resistance by the Republicans.

At this point in his term, almost all Republicans in congress were believing the Russia hoax and figured he’d be removed or forced to resign

Which was all part of Hillary and Obamas plan

And McConnell’s. And much of the Republican party’s. Hillary and Obama couldn’t have done it without them.

I don’t think it is reasonable to characterize any of the endless crap Dems have pulled as a hoax. Thyre are a cancer on society, putrid.

Yeah and that’s after CNN added 20 points to it. Biden’s actual rating is lower than whale shit.

Just remember that this is with the media actively working to undermine Trump during his presidency and supporting Biden during his. Imagine what the respective numbers would look like with an actually neutral press.

If even CNN is noticing how unpopular BrandonCorp is, he must be in yuuuuuge trouble.

Revealing themselves to be what they are has helped destroy them. Donald Trump was the catalyst.

Leftist cancel culture is being driven by the emotionally deranged agenda of teenage girls:
https://amgreatness.com/2022/04/15/the-pathological-nature-of-wokeness/

Any other candidate in 2016 and the Clintons would have gotten back in the White House. The slow boil of leftilibtard sabotage would have continued unabated. Instead, the leftilibtards now feel forced to hurry up with their agenda, and when you hurry, you make mistakes.

I keep thinking of that get-together where Biden is aimlessly milling around the room alone while Chad Obama is dampening the panties of all the Democrat groupies.
And I reflect that, in reality, this is a giant of a man who is so damn popular that more US citizens chose to vote for him to be their president than any other man in US history, including Chad Obama.
Consistency is the key to a persuasive worldview.
Whadda you lookin’ at, mook?

But Biden wasn’t elected to the presidency. Is this the lowest ever for someone who was shoehorned into a job he was unprepared for (and never could be prepared for) by massive amounts of censorship, lies and vote fraud?

Of course it is

Thirty percent of this country could probably not name the president, let alone the vice president or the secretary of state.

Talk about your massive snow job. Except for Lefty ideologues – about 15% of the moron part of our population – Biden has done absolutely nothing to warrant approval on anything. What exactly did pollsters ask people in order to inflated the number…”Do you like ice cream like [Creepy Uncle] Joe?

We spend our summer months traveling the US in our Motorcoach. During 2020 we hit 18 states from the east coast, Midwest and out through the Rockies. I can tell you with clarity that the only place that had more Biden signs that Trump signs was downtown Denver. Everywhere else it was 100 or more to 1. So there’s that. Let’s face it, the media is dishonest. They are propagandists for a point of view that is out of step with the world view of the majority of people. They cheer on liberal ideologies relentlessly. The chattering class see themselves in everyone they interact with. Why? Because they don’t want to be sullied or challenged when meeting or talking with someone whom might have a different viewpoint. Outside of the bubble they cannot receive affirmation of their very being. So they avoid it at all costs.

Polls told us that President Hillary was a shoo-in to defeat Trump right up to election day. Vegas had her favored 95-1. Why are we even talking about polls anymore?

Because like an abusive relationship people just can’t stop themselves.

If we play this right, Trump and DeSantis will thrash the Uniparty going into 2024 and we can avoid a divisive GOP primary. It is critical that DeSantis ignore the siren’s call to run against Trump. The NeverTrumpers are already playing that game and so far, DeSantis is not biting.

With DeSantis behind him, Trump cannot lose in 2024. With DeSantis and Trump working together this year and into 2024, the Uniparty may very well be history by 2024. Then it is up to Trump to decide if he really wants to run at his age. He would have already accomplished the most amazing feat in US history and set up a young replacement who cannot lose in 2024 with Trump’s endorsement.

If the next two years are not enough to demolish the Uniparty, it may be necessary for Trump to run with DeSantis’ support. Then DeSantis’ would be unbeatable in 2028. There is no one else on the radar screen! Focus on what needs to be done, let Trump decide and we can’t lose!

So how does the Stupid Party once again shoot themselves in the foot? Guess! The limp-wristed “Yeah but…..” crowd once again saps all the energy and focus out of a winning effort. Let’s not do that again! The stars and planets are all aligned for us to rout the Uniparty very soon! Let it happen!

It’s probably going to take a lot more than 16 hears to fix everything Democrats have worked so hard to destroy BUT it would be an amazing start.

The damage that Soros/Obama/Pelosi/Schumer/GOPe has done is generational. A generation is 25 years – and that’s if the damage does not leak into another generation (of course it will).

We’re looking at 30 to 40 years – MINIMUM – to ever get America to where it once was. And that’s assuming the population of America has the IQ it once did. It does not:

There once was a collective American genius: that is, the people as a whole (educated or not) had a moral center (Judeo-Christian) and at least a cursory understanding of citizenship, the Constitution and the Bill of Rights. That’s gone. Add to that the unvetting army of illegal aliens the left is bringing across the border and seeding into American cities.

A good start would be dissolving the central bank (fed).

“It is critical that DeSantis ignore the siren’s call to run against Trump.”

DeSantis has made it clear he will not run against Trump.

CNN has been incapable of truth for at least 20 years.

It’s never been their job. Propaganda has.

Beware the fools gold of “presidential approval”. Obama was re-elected, we can’t win by “the other guy baaadddd” outside of midterms.

Man, did he fail: it was his election to win. All he had to do was not argue with Obama’s proxy (Candy Crowley) during a debate, and instead focus on dumb Barry.

Romney is a pussy against any bully. But he is a bully against people who might trust him.

Since both polls lean left you know the gap is much wider.

At this point in his term, almost all Republicans in congress were believing the Russia hoax and figured he’d be removed or forced to resign

Which was all part of Hillary and Obamas plan

SCARY, is the fact that this is the best CNN can sugarcoat it. Just imagine where Joe’s real true numbers would be if the whole Fake News media & leftwing establishment hated & treated Grandpa Joe like he was a Trump… Wow! And Trump still beats him?

Since the dishonest media couldn’t crap on Trump hard enough, nor can they fellate Pedo Joe hard enough. I’m going to have to take Pedo Joe’s score down ten points and add those to Trump’s. That should more honestly reflect reality,