Jackson stressed viewpoint diversity and mutual respect, saying “it’s important for GDS and for schools today, to try to encourage students to get back to that,” but the school has failed to do so during her tenure.

Prestigious Georgetown Day School (GDS) was in the spotlight last week, as Senators Ted Cruz (R-Tex) and Marsha Blackburn (R-Tenn) questioned Judge Ketanji Brown’s Jackson’s views on CRT-based instruction at the school. Jackson has been a trustee since 2019 at GDS, where tuition is $40,000 a year or higher. The school is a longstanding member of the National Association of Independent Schools (NAIS).

Yet comments she made at a GDS virtual panel in 2020 suggest she was aware of divisiveness, fragility, and a lack of viewpoint diversity at the school.

On that panel, she claimed that “in a diverse community like GDS, striving for diversity means diversity of perspectives as well. I mean, people are not clones of one another,” she continued, “and so we’ve got to figure out how to take into account other perspectives, and not feel so challenged by them, that we’re not able to continue to have civil discourse.”

At a 2020 panel, Ketanji Brown Jackson says schools should seek: diverse perspectives, disagreeing without being disagreeable, & understanding that reasonable minds can differ. One can laugh at her punting on what a woman is, but these are all good things. https://t.co/gBS1UgJ1MO pic.twitter.com/U0senYYx1r

Jackson’s comments were in response to the question, “What should we be teaching children about relationships with people with whom they have strong differences?”

The judge also advocated for the legal principle that “reasonable minds can differ,” for mutual respect for points of view, and that personal relationships not be marred by conflict in the realm of ideas. She stressed that “it’s important for GDS and for schools today, to try to encourage students to get back to that.”

However, based on information gleaned from evidence presented by Cruz, as well as an investigation into resources presented on GDS’ website, the school’s curriculum remains divisive, one-sided, and intolerant of divergent views. Jackson made her comments in November 2020, at the school’s Benjamin Cooper Memorial Lecture & 75th Anniversary Speaker Series, on the legacy of Justice Ruth Bader Ginsburg.

During his Senate hearing questioning, Cruz highlighted GDS’s Family and Educator Anti-Racist Resources which include “Critical Race Theory: An Introduction,” “The End of Policing,” and “Stamped: Racism, Antiracism, and You” by Ibram Kendi. Not only is Kendi’s “Antiracist Baby,” which tells children to “confess when being racist,” taught to Pre-K through second grade students (ages 4 to 7), but the resource page also links to “Characteristics of White Supremacy Culture” (debunked as pseudo-scholarship here and here) and “Race Cars: A Children’s Book about White Privilege“. 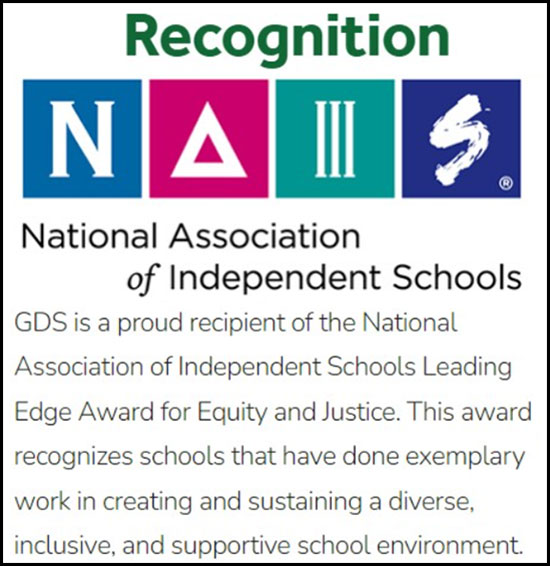 As part of the DEI office’s “Social Justice Teach-in” Days, avowed anti-capitalist and “abolitionist teacher” Dr. Bettina L. Love returned to Georgetown Day in February 2021 to give a virtual keynote after “an enthusiastic reponse” to her speech to GDS children in October 2020.

“BLM at School” was also an integral part of the school’s “Black Lives Matter Week of Action” curriculum this year for Pre-K to 4th grade students. GDS also sent six employees to NAIS’ 2019 People of Color Conference as part of its “Affinity Group Hosting Team,” and the school boasts a total of 27 unique affinity groups, including a “White Antiracism Group (WAG),” intended to be a “calling-in for white folks.” 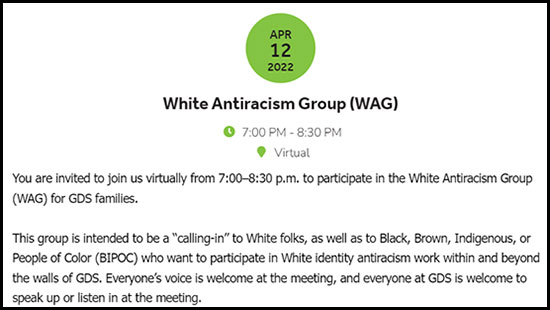 Watch a facilitator discuss how disagreements are handled in White Antiracism Groups.

This group is also listed in an enrollment contract clause mandatory for parents, that functions as an “antiracist pledge“.

Such readings, practices, and teaching materials are at odds with Jackson’s statements on the aforementioned panel, in that they frame disagreements about the nature and extent of racism in society not as “reasonable minds that differ” but in terms of motivated reasoning and hidden power dynamics.

When asked by Cruz if these applications of Critical Race Theory were present at GDS, Jackson admitted that “the board does not control the curriculum, the board does not focus on that, that’s not what we do as board members, so I’m actually not sure.” This is difficult to swallow, given her connections to the school.

According to the Washington Post, Ketanji Brown Jackson is expected to be confirmed early next month.

The Legal Insurrection Foundation’s CriticalRace.org continues to track the evolution of Critical Social Justice curriculum at Georgetown Day School as well as other prominent NAIS secondary schools in the D.C. area, such as Sidwell Friends and National Cathedral School. 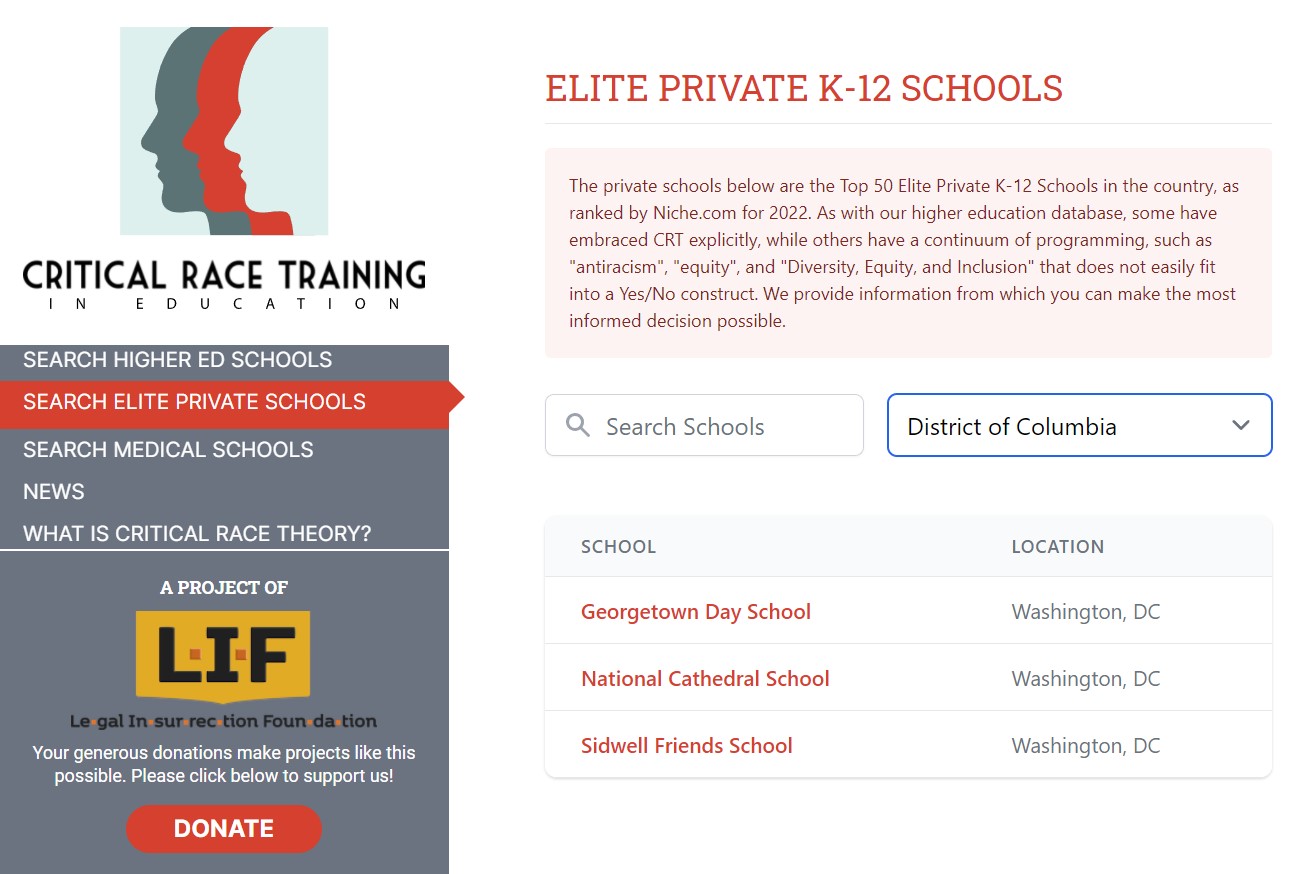 This is the seventh in a series of articles devoted to exposing the radical influence of the National Association of Independent Schools (NAIS) on the culture and curriculum at their 1,900 member schools, which include some of the most elite K-12 institutions in the country.

Paul Rossi is a high school mathematics teacher, tutor, and writer. In April 2021, he went public about the impact of Critical Race Theory and pedagogy on his students at Grace Church School, where he had taught since 2012. He is currently an advisor to the Educational Liberty Alliance and a co-founder of Chalkboard Heresy, a channel platforming dissidents in education. Please send tips and stories to [email protected] or DM on Twitter at @pauldrossi.

It’s interesting that this racial warrior should be on the board of a school that I’m price alone keeps out most of “those people”.

She’s a warrior and once she’s on the Supreme Court she’ll be on the warthpath. Whoop whoop whoop!

Asked what is her first priority, “My first priority is to scalp the constitution and use my tomahawk to shorten sentences of black criminals. I will laugh out loud at any appeals of white police officers. When I get time I plan to take a course in biology and study skin pigmentation.”

Middle class white families probably do not qualify for any aid.. so if a group was excluded that would be it.

These CRT cretins have set the tone of intolerance, there is no middle ground on this topic. They are wrong, totally wrong, and deserve to be treated as racists.

Boards of such schools set and approve of policies and curriculum.
Board members are not chosen because they are seen as prominent writers of unlimited amounts of money and have political influence and communal prestige

I recently heard of bunch of NRA directors attempting to make a substantively equivalent argument. It is not going well for them.