MESA has been captured by activists bent on the destruction of Israel by any means possible. 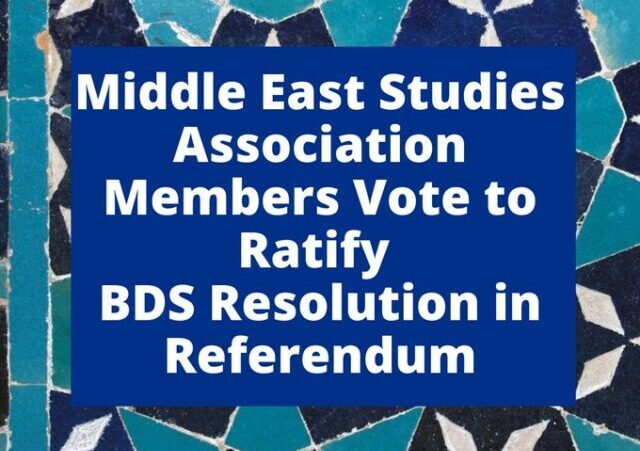 As we previously reported, at its annual business meeting last December, the Middle East Studies Association (MESA) passed a resolution at its business meeting endorsing the Boycott, Divestment and Sanctions (BDS) academic boycott of Israel. Per association rules, the resolution was then sent to its membership for ratification. Voting closed March 22, and MESA declared victory the next day:

In a 768-167 vote, members of the Middle East Studies Association have voted in favor of a resolution endorsing the Palestinian call for boycotts, divestment, and sanctions of Israel as a way to hold the government accountable for ongoing human rights violations. All full 2022 MESA members were asked to cast their votes electronically on the proposed resolution during a 50-day voting period that lasted from January 31 through March 22. Now that the resolution has been ratified, MESA’s Board of Directors will work in consultation with its Committee on Academic Freedom to enforce it in a manner consistent with MESA’s bylaws as well as relevant U.S. federal, state, and local laws.

“Our members have cast a clear vote to answer the call for solidarity from Palestinian scholars and students experiencing violations of their right to education and other human rights,” said MESA President Eve Troutt Powell. “MESA’s Board will work to honor the will of its members and ensure that the call for an academic boycott is upheld without undermining our commitment to the free exchange of ideas and scholarship.”

In the run-up to the vote, MESA ignored a member request to open an online forum where members could discuss the resolution’s pros and cons, as it has done on previous occasions.

Here are links to LIF’s prior coverage of MESA’s BDS vote. 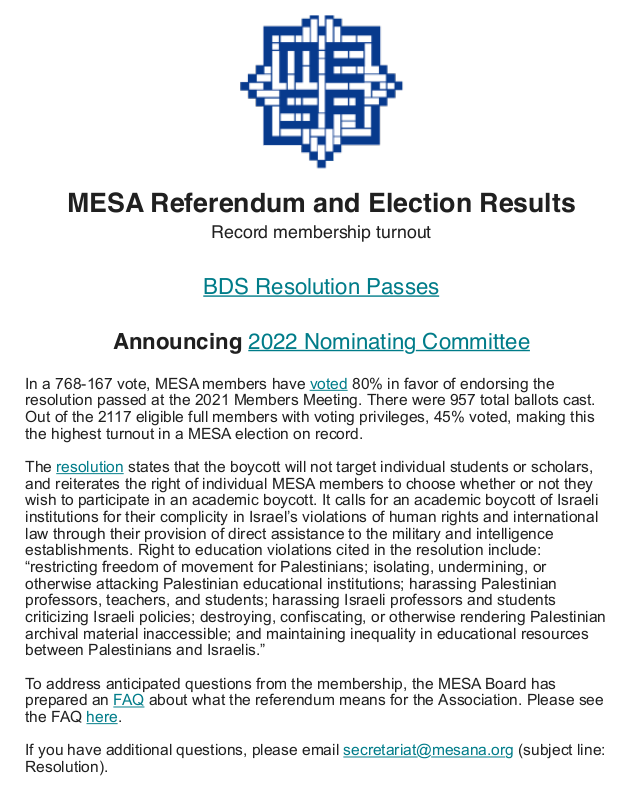 MESA’s membership seems to have fallen substantially since the association went fully anti-Israel. As of December 1, 2021, MESA claimed to have “nearly 2,700” individual members. Three and a half months later, it has only 2,117 members – a drop of 21.6%!

But MESA has chosen to present the vote as a victory, a triumph of democracy. 45% of eligible members voted! 80% of them supported the resolution!

Another way to present the situation would be, 583 members left MESA after this once-great scholars’ association showed its true colors as a far-left political advocacy group. That’s more than one in every five members! MESA has managed to double-decimate (quinquemate?) its own membership!

Naturally, that’s not what MESA said. But one might hope that more level heads within the organization are realizing that a formerly serious professional organization has committed professional suicide and is now just another activist assemblage.

Given the group’s previously stellar reputation, it may take a while for all the damage to be felt, but over time the work of its members will be viewed with more and more skepticism – and deservedly so – because MESA has shown that it is no longer an organization that prizes scholarly objectivity, that welcomes well-researched work and well-supported opinions based on it, but only opinions that match its pre-existing political prejudices. In the words of Professor Norman Stillman, Academic Council Chairman of the Association for the Study of the Middle East and Africa (ASMEA):

By passing this resolution to blacklist and boycott Israeli institutions of higher learning, the membership of MESA has abandoned any pretext of being an academic association in favor of an organization with a singular political cause: to delegitimize Israel. Their abandonment of the basic principles of academic integrity and freedom, namely the free expression of ideas, is deeply rooted in old biases and prejudice. 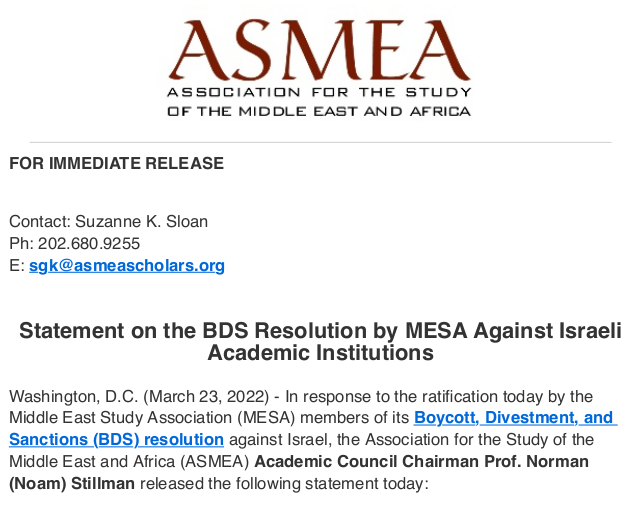 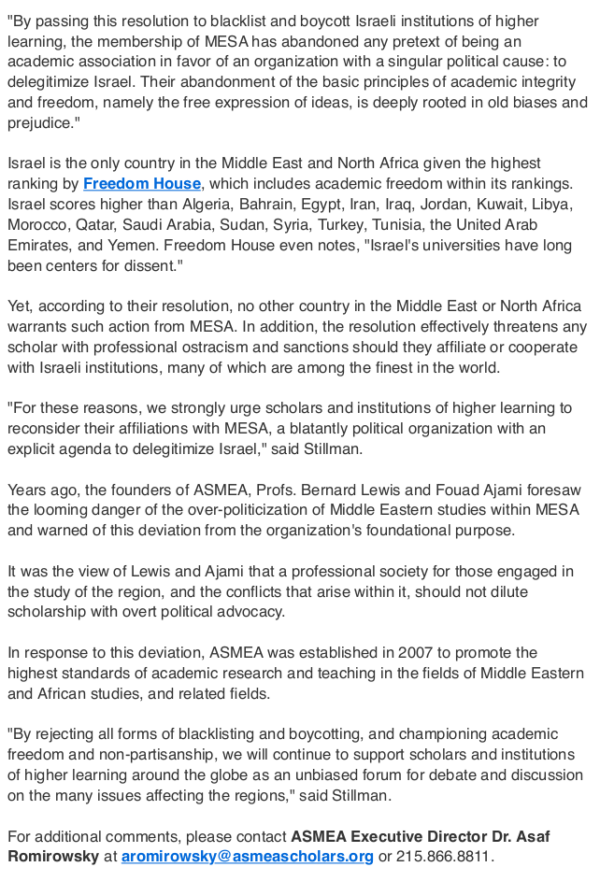 Furthermore, a study recently released by the AMCHA Initiative correlates the presence and actions of faculty who have endorsed BDS with surging campus anti-Semitism.

Certainly, some universities have already taken notice and decamped from MESA. Others will eventually follow.

Will George Washington University be one of them? The university claims to oppose boycott and divestment. According to GWU Executive Director of Media Relations and University Spokesperson Joshua Grossman, the university’s “policy on the BDS movement is very clear: GW does not support divestment or other actions called for by BDS.”

Nevertheless, GWU has housed MESA’s headquarters since about 2020. The university claims to see no conflict here, because, according to Grossman “MESA is an independent legal entity (501c3) located at the Elliott School of International Affairs building, and it is not a chartered GW organization. GW faculty affiliated with MESA may express their opinions on a variety of issues, and these opinions are protected by academic freedom.” 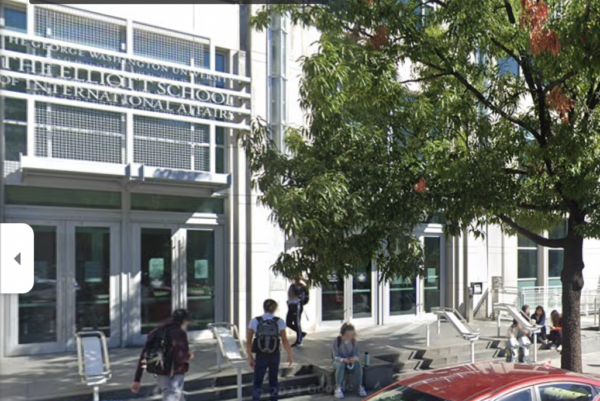 How far does that go? For instance, will GWU allow faculty members to refuse recommendation letters to students wishing to study in Israel? Will the university eventually conclude that being in bed with an active partisan obsessively pursuing a boycott of the Middle East’s only real democracy and the world’s only Jewish State, is not in line with its values?

After the vote, LIF reached out to all remaining American universities that still maintain membership in MESA. We asked whether and in what way they would carry out the boycott, divestment, and sanctions resolution; and whether they would continue to belong to MESA in light of the BDS resolution. As of the close of business on March 24, we haven’t heard back from any of them, except for GWU as reported above.

It is helpful when depraved minded, hateful villains, self identify and forgive us of any doubt about the content of their character.

I hope that governors Abbott, DeSantis, and any other Republican Governor who has joined them in dispensing with “MUH GOVERNMENT BAD!!!” in favor of actually governing is reading this article.

Just in case their offices read emails sent, and if you send them the story an intern will inform them “this number of people are concerned about this”.

Help people on our side with the ability to do something about this respond.

So boycotting Israel is good ?

Let;s hope some of the Christian and Jewish MESA members visit the Middle East. Preferably Afghanistan. There they can die by the sword!

The only possible Christians in that group are the ones who voted against it. But I wager that there are few Muslims in the group, which means if the vast majority of them who are not Muslim, if they went to a Muslim country, even non-Christians, would be subject to dying by the sword. But they are too brainwashed by Muslim propaganda and political correctness to know it.

Middle East Studies departments across the nation and MESA, in particular, have played a major role in the explosion of anti-Semitism on our college campuses, which has now metastasized into our society at large.

Middle East Studies is another name for Friends of Muslim Brotherhood.