LIF has now written to GWU three times asking whether MESA will be permitted to operate its planned discriminatory and anti-academic freedom boycott through GWU’s campus, which houses MESA’s HQ. To date, GWU has ignored our questions. 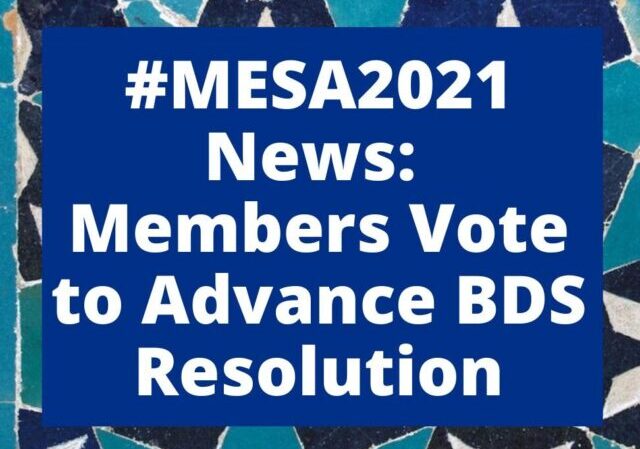 Does George Washington University support the Boycott, Divestment and Sanctions movement against Israel? It says it doesn’t, and talks the talk of supporting the free exchange of ideas and engagement, but is it walking the walk?

LIF has asked, but neither the president nor the media office responded about whether GWU intended to observe the Israel boycott resolution approved at the Middle East Studies Association’s December 2, 2021, business meeting.

On the surface, GWU has academic freedom guidelines committing it to “free inquiry, free expression, and the vigorous discussion and debate,” and cautioning faculty and others not to silence others’ views.

After the American Studies Association voted in 2013 to support an academic boycott of Israel, GWU issued a statement [update 3-24-2022 – statement removed from GWU website, archive is here] saying, “We continue to believe that academic exchanges and conversations lead to better understanding between nations and people of differing views.” GWU also stated it planned to continue its multiple relationships with Israeli institutions as well as to explore new ones.

In 2018, after the university’s student association passed a divestment resolution, GWU’s former President, Thomas J. LeBlanc, was quick to issue a statement asserting that “this does not represent the university’s views, and the university will not implement such a proposal.” He also “encourage[d] the GW community to foster an inclusive environment and to continue to engage in open, respectful dialogue.”

Yet, in May 2020, GWU appointed BDS advocate Ilana Feldman as Interim Dean of its Elliott School of International Affairs. Feldman, an anthropology professor at GWU, had a long history of leadership on BDS. Among other things, she co-sponsored a BDS resolution submitted to the American Anthropological Association in 2015, and was one of a handful of members managing the effort to secure its passage.

Earlier, in 2019, the university reached an agreement to bring MESA from Arizona to a new headquarters at GWU. MESA, which at least in the past was the premier academic association for Middle East Studies, has been involved in a long game of anti-Israel, pro-BDS advocacy. MESA has many international institutional and individual members.

In 2015 MESA approved a resolution promoting BDS advocacy and condemning opposition to BDS as a violation of academic freedom. In 2017, MESA amended its bylaws to remove the word “non-political” from its nature and objectives, thereby paving the way for more explicit anti-Israel advocacy.

Predictably, MESA has now passed a resolution endorsing BDS. It was passed December 2 during MESA’s annual meeting (and during the Jewish celebration of Hanukkah), and was circulated to MESA’s full membership on January 20. Voting will open January 31 and close March 22.

On December 2, 2021, MESA members attending the Annual Meeting voted to advance a BDS resolution to a full-membership vote in early 2022. For more details: https://t.co/P2VkQbxgGV pic.twitter.com/vbqSpLfCAp

The resolution’s prefatory language is typical of the fact-free demonization of Israel now common in far-leftist and Islamist academia. Although the resolution coyly fails to offer specifics – instead leaving details to its board of directors and misnamed Committee on Academic ‘Freedom’ – implementing it will at a minimum push MESA members to carry out the boycott on U.S. college campuses. 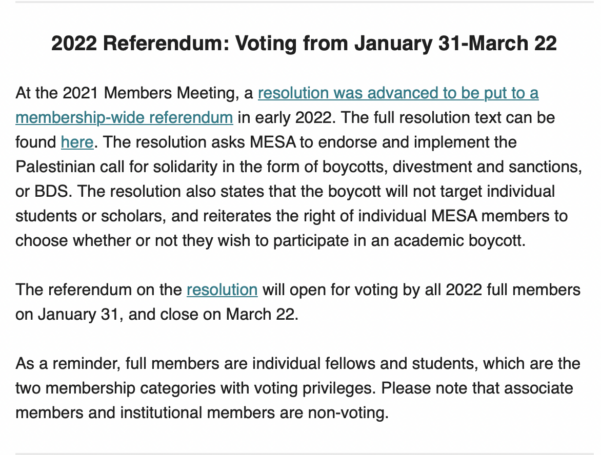 Excerpt from 1/20/22 MESA email to membership, captioned “Thank you for continuing your MESA Membership in 2022!”

The summary sent to membership asserts, “The resolution also states that the boycott will not target individual students or scholars…” Precisely how it will avoid doing so is unexplained, as targeting individual students or scholars is a typical way an academic boycott manifests itself. As a group of professors wrote in a response objecting to New York University Review of Law & Social Change’s statement in support of BDS:

The BDS/PACBI boycott of Israeli academic institutions is therefore more aptly described as a blacklist which punishes and discriminates against individual academics on the basis of their nationality, political views, and the policies and actions of their employers and their government. Furthermore, unless the RLSC is also committed to extending its boycott to Arab faculty of Israeli universities, the Statement should be seen as calling for discrimination on a religious basis as well, since only Jewish-Israeli academics will be ensnared by it.

As for targeting students, in 2018, two teachers at the University of Michigan – Associate Professor John Cheney-Lippold and graduate student-teaching instructor Lucy Peterson – refused to write reference letters for students because they wished to study in Israel. Both Cheney Lippold and Peterson explicitly cited their support of BDS as the reason for their refusals.

As anti-Israel activists took over MESA, many moderate and/or pro-Israel members decamped. By MESA’s own admission, between 2017 and 2021, its membership fell from nearly 3,000 to nearly 2,700. Several former-MESA members joined an alternative organization founded by the late Bernard Lewis and Fouad Ajami, the Association for the Study of the Middle East and Africa, leading one to wonder for how long the openly political MESA will remain a leading professional organization.

Conceivably, the university did not realize it was taking a snake into its bed when it agreed to house MESA. GWU may have been swayed by MESA’s prior reputation, and missed its past pro-BDS resolution and adoption of explicitly political advocacy. But it can’t claim ignorance anymore.

LIF has now written to GWU three times asking how it would respond should MESA’s membership ratify the BDS resolution against Israel. In particular, we have asked whether MESA will be permitted to maintain its GWU office space if MESA ratifies BDS. Interim President Mark S. Wrighton, who took the helm from retiring President LeBlanc on January 1, 2022, has the chance to place his mark on the university quickly, for good or ill. To date, GWU has ignored our questions.

Does GWU still oppose boycotting Israel? Does it still “believe that academic exchanges and conversations lead to better understanding between nations and people of differing views”? Will it enforce its academic freedom guidelines? Does it still support “free inquiry, free expression, and the vigorous discussion and debate”? Given Title VI’s prohibitions on discrimination, can the university maintain its eligibility to receive federal funding if it continues to house MESA?

You either meant what you said or you lied. Liar in one thing. liar in all things.

It isn’t so much about Israel anymore.