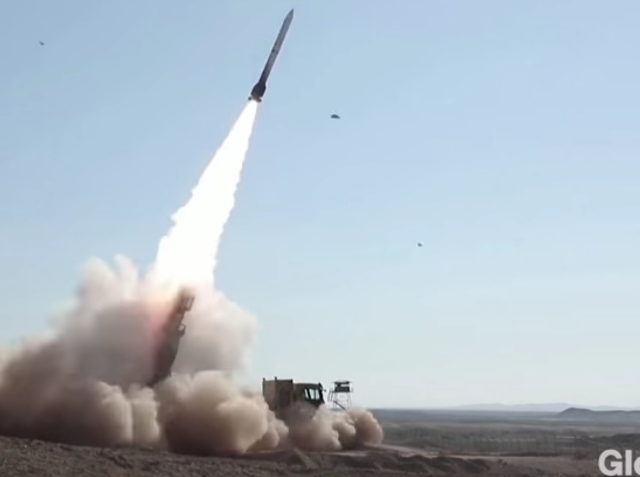 While President Joe Biden’s administration holds high-level talks with Iran to restore the flawed 2015 nuclear deal, the Mullah regime has carried out a mock strike aimed at an Israeli nuclear reactor.

The threat was not limited to the Israeli nuclear reactor. “The IRGC threatened to attack … Jerusalem, Tel Aviv and Haifa” as part of the drill, the Jerusalem Post noted.

This just days prior to the next round of nuclear talks.pic.twitter.com/Uv3fXlNndx

The report said the Guard fired 16 missiles during an ongoing major military exercise across the country’s south. It said the name of missiles were Emad, Ghadr, Sejjil, Zalzal, Dezful and Zolfaghar and that their range is from 350 to 2000 kilometers (220 to 1250 miles). The short-range and medium-range missiles, Iran has said, can reach U.S. bases in the region as well as archenemy Israel.

It said the missiles successfully hit one target at the same time as 10 drones simultaneously hit their targets. State TV showed missiles launching in the desert. Iran had displayed and test fired the missiles in the past. (…)

[Chief of staff of Iran’s Armed Forces, Major General Hossein] Bagheri said, “This was a tiny part of hundreds of missiles that can hit any hostile target simultaneously.” (…)

During the second day of the drill on Tuesday, Iran launched cruise missiles, too. (Emphasis mine)

The IRGC drill is the latest in the series of threats made by Tehran. Earlier this month, Iranian regime-affiliated newspaper, the Tehran Times, released a list of Israeli targets that Iran intends to strike in case of a military conflict. The target-list followed a warning by a senior Iranian military spokesman to ‘annihilate’ Israel. “We will not back off from the annihilation of Israel, even one millimeter. We want to destroy Zionism in the world,” top Iranian military spokesman, Brig.-Gen. Abolfazl Shekarchi declared recently.

With Tehran demonstrating its will and ability to stage a nuclear attack on Israel, the most-trusted U.S. alley in the region, the Biden White House is gearing up for the next round of nuclear talks with Tehran. “Negotiators from Iran and five world powers that are trying to revive a tattered 2015 nuclear deal will resume talks in Vienna next week,” the ABC News reported citing European Union officials.

By distracting the Biden administration with talks, Iran is biding its time to acquire a nuclear arsenal. As Biden’s team negotiates with the Mullahs, they are increasing their uranium stockpile. The United Nations’ nuclear agency, IAEA, estimates that the Iranian are “a short, technical step from weapons-grade levels of 90%.”

The next announcement you will hear from Iranian bullhorns will be:
“Incoming. This is not a drill.”

Please end this foolishness once and for all by making Iran a sea of glass.

Then use Iran for nuclear waste.

Giving Israel a free look.
No downside here for them.

Stephen Miller: “I believe Joe Biden is controlled by his staff and his aides. And not just senior staff. Mid-level aides in the White House. You know a recent incident that people made a great deal of fun about, as well as they should have, is that Joe Biden said, “Let’s go Brandon!” during Christmas. To me reveals something much more insidious which is he doesn’t know about the ‘Let’s go Brandon’ meme because he doesn’t consume any of his own information. He is completely sheltered and controlled.”

The Iranian leadership seems bound and determined to get their country radioactive.

It might be better to return Iran to Mohamed’s level of civilization. Looking at their mindset, they would be happy with that.

Not much of a leap…

Iran to Mohamed’s level of civilization?

Actually, that would be a great leap forward!

Israel should give the Iranians a critique of their drill by showing them how it’s done on Iran’s real reactor.