Ebrahim “The Butcher” Raisi sent some 5000 Iranian dissidents to their deaths in the late 1980s. 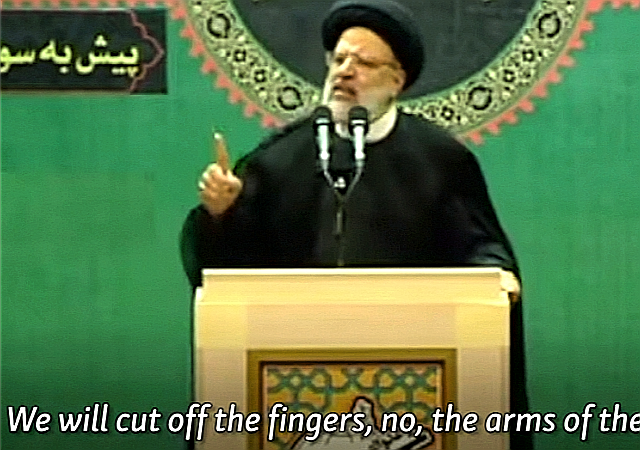 Iran has declared the regime-favored candidate, Ebrahim Raisi, as the winner of the Friday’s presidential election. Raisi, also known as the “Butcher” for ordering mass executions of Iranian dissidents, reportedly won 62 percent of the vote in the sham election, the Iranian foreign ministry declared today.

Raisi organized the mass execution and torture of thousands of Iranian dissidents, including helpless women and children, reports say. He launched his political careers as a member of the four-men “Death Committee” which sent at least 5000 Iranians to their deaths in the late 1980s.

In 2019, Iran’s Supreme Leader Ayatollah Khamenei appointed Raisi as head of the country’s judiciary, making him the country’s all-powerful Sharia Law enforcer. Widely regarded as the protégé of the ruling Ayatollah, he was viewed as the candidate favored to win the stage-managed election.

The Prague-based Radio Free Europe detailed Raisi’s checkered past ahead of the presidential vote:

As deputy Tehran prosecutor, Raisi played a role in one of the darkest chapters of the Islamic republic: the 1988 mass execution of political prisoners following a fatwa by the founder of the republic, Ayatollah Ruhollah Khomeini.

Raisi was a member of the so-called “death committee,” which interrogated prisoners about their religious beliefs and political affiliations and sent thousands of Iranians to their deaths, often after trials lasting a few minutes.

“Khomeini issued two fatwas for the creation of the committees, and clearly he wanted the executions, so he appointed hard-liners. He must have thought Raisi was a good person for that,” historian Ervand Abrahamian, who wrote extensively about the killings, said in a 2017 interview with the Center for Human Rights in Iran.

Many view Raisi as a dangerous figure who could help consolidate the power of hard-liners and the country’s feared security apparatus, including the intelligence branch of the IRGC, which has been behind the arrests of scores of activists, ecologists, and dual nationals.

The election was just another maneuver by the Shia-Islamic regime to assert its political legitimacy as it negotiates with President Joe Biden’s administration to restore the Obama-era nuclear deal.

With the real Iranian opposition either murdered by henchmen like Raisi or forced to live in exile abroad, the voters had to choose between a handful of regime-approved candidates.

The voter turnout was at a record low as a majority of Iranians stayed away from the rigged poll. “Official figures showed voter turnout was the lowest ever for a presidential election, at 48.8%, compared to more than 70% for the previous vote in 2017,” the BBC reported. Considering the Iranian regime’s efforts to hide the widespread public disaffection, the actual voter participation could be much lower.

“We ask God [Allah] to grant him success,” spokesman for Gaza-based Islamic terrorist group Hamas said. “Once again the people of Iran have reiterated their commitment to the path of revolution and its regime,” Palestinian Islamic Jihad declared.

Both terrorist groups receive financial and military support from the Iranian regime.

The New York Times was equally thrilled at the outcome. “Iranian Hard-liner May Be Best Path to Restoring Nuclear Deal,” the newspaper cheered as Tehran declared Raisi the winner. The Washington Post noted that “Raisi has expressed a willingness to revive the 2015 nuclear deal.” Many news outlets have indicated that the Biden White House wants the U.S. to reenter the nuclear deal before the new president takes office.

Well, If Joe Biden can do it here I don’t see why other countries can’t do it..

They wear turbans so Joe can’t sniff their hair.

Those turbans are perfect for machine vision targeting.

They would have to very brave Sir Robin to take off their turbans around Biden.

Sundowner call to congratulate Raisi on his historic win yet?

It was probably more honest of an election than was in America in 2020.

I trust this maniac as much as I trust Garland, Wray, that idiot Lloyd Austin and the other malignant loons who have had the monopoly of power in the federal government since 2008.

Word is out that D.B. Cooper is looking for -JBStonesFan.