As the purge accelerates, be sure to sign up for the LI newsletter and to join us on alternative social media sites. 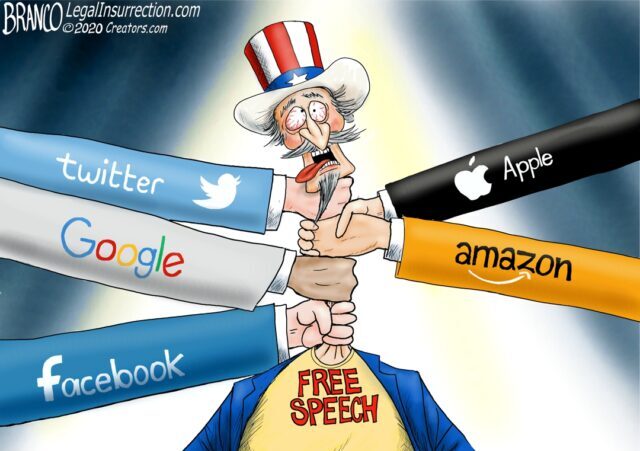 Big Tech is purging conservative and non-mainstream content and influencers at break-neck speed.

Oddly, they never seem to censor, delete, or suspend leftist purveyors of misinformation, the censorship shuttupery hammer comes down only on the right.

Also: not true. But, hey, think of those communication positives above.

Hyper-crazy triple maskers and vaxxers are “ashamed” of their COVID+ status, and are trying really hard to adjust to the reality that we have all known all along: tying an old bra to your face is stupid, viruses scoff at your social distancing, and shutting down the entire country was a yuge mistake. All the best lefties are saying this now, but try saying this as a rightie.

Having unelected tech oligarchs ban duly elected members of Congress – or even the sitting President – from using their massive platforms is dystopian. Remember how many world leaders warned that FB & Twitter's banning of Trump was a threat to democracy.https://t.co/zIT7l04hMW https://t.co/2BPFrgeZXv

Twitter is claiming “covid misinformation” as the reason, but that’s likely just the excuse.

Let me amend that, it’s clearly just the excuse.

And btw if we’re banning people for “misleading” info on COVID then the public health establishment freaks pushing masks in schools should go next pic.twitter.com/uqpSZr8BmB

Grabien was suspended from Twitter. . . for quoting a sitting Congressman.

Joe Rogan questions big tech for censoring “one of the most qualified people in the world to talk about vaccines”Dr. Robert Malone.

I watched the whole 3 hour Robert Malone interview on Joe Rogan last night. The "mass formation psychosis" stuff was barely even an aside. It was mostly science-based, rational questions about the vaccines. Every American should watch it.

The legacy media has intentionally ignored this story. 4 million people saw it anyway!

All credit to Joe Rogan and Dr. Robert Malone for sitting down to have this bold and very important discussion. https://t.co/XGMM9EuCcw

Meanwhile, Google is actively censoring the term “mass information psychosis” lest word get out that the American people are being played.

We are witnessing Google’s real-time censorship of the term “mass formation psychosis” as mentioned by @RWMaloneMD on @joerogan podcast. Don’t let them get away with it! Listen to the episode for yourself. pic.twitter.com/wvvmN6X3Uw

How is it that your top search result for Mass Formation Psychosis is a YouTuber with less than 9,000 subs who is calling for Spotify to ban the Rogan interview with Dr Malone? pic.twitter.com/yXFfyzA7ws

It seems that Rogan is fed up and has created an account at Gettr.

In fact, Legal Insurrection has also created a Gettr account in response to this crackdown on right thinking, opinions, and information. You can also find us on Parler and Telegram.

With midterms looming this year, we can expect an acceleration of Big Tech’s purge, so be sure to sign up for the newsletter of every site you read and enjoy, starting, of course, with LI.

The key is to establish and maintain our connections beyond Big Tech strongholds. Reach out to each other across conservative and right media and find ways to get and to stay connected. Do it now, while you still can.

We watched Fight Club the other night.. it had been a long time since I’d seen the movie. The final scene really sparked my imagination… I wonder what Tyler Durden would do about Big Tech.

Watched the Dr Malone interview yesterday, that people not even worthy to tie his shoes is making medical calls on his assessment of Covid is a disgrace.
As he said it’s a conjunction of politics and media to shut down anything other that the prescribed regimen of the CDC and establishment.

It was not too long ago that they started pushing their “speech is violence” whining and look where we are today. We did not take it seriously enough, so we did not push back hard enough.
Look where we are now.

It’s never too late to push back, but the more you wait the harder it gets. And we can not count on Republicans. They will not push back. They are part of the problem.

It is time to realize that Censorship Is Violence, real violence. So it is time to understand it, and to start pushing back in every way possible. We already lost so much.

Maybe it’s difficult to see it when you take so much for granted, but those of us who lived under totalitarianism can see it clearly. It is here already.

Remember, Censorship Is Violence, and they are doing it to YOU.

Oh, hey — I thought this article would be about today’s news that any text messages send over T-Mobile containing links to gatewaypundit.com are now arriving at the other end… with the link snipped out.

Similar claims were made a year ago about Verizon. Both of our phones are from them, so I tested it and found the claims to be incorrect. I am thus skeptical of this claim.

I tried it yesterday, and the gateway pundit link was deleted. When I sent the text message encrypted then it would go through. My son claims it is spam filter issues. I am waiting for a response from T-Mobile, but they seem to be silent. They stand to lose a lot of customers if they don’t get out ahead of this.

I sent a link to my wife, and it went through. Then again, we are on the same contract, so that may have something to do with it. Plus, I haven’t found that anyone has tried correlating the problem with iPhone vs Android or vice versa.

After they censor and purge everyone on the right they’ll start censoring and purging their own.

At the rate they’re going that should start happening by late spring.

Watching the leftist extremists start purging each other will be very entertaining.

Malone is a quack who frankly had nothing to do with the devlopment of mRNA technology. Don’t believe me? Search Pubmed.

Also, wait until Jack Prilosec (who isn;t very bright) finds out that Malone has no descernible qualifications that would allow him to speak to “mass psychosis” with any meaningful degree of professional credibility.

I didn’t say he did. That said, even those we consider quacks should be allowed to share their ideas, just as we should be able to share and debate them. Purging the internet to protect us from certain viewpoints is unacceptable, particularly given who is defining what is acceptable and why.

This is such a fantastically stupid, uniformed comment one struggles with where to start. I would recommend this article…

…from Nature. Even though it’s not very favorable to Malone because it was published after Malone had become persona non grata in the ‘accepted scientific circles’ it cedes that Malone – who has exhaustive medical research bona fides – was instrumental in the development of novel vaccine technology. Like many novel technologies in medicine, mRNA was a hugely collaborative and sometimes derivative process.

To suggest that Malone had ‘nothing to do with the development of the mRNA’ is just moronic.

The No Agenda Show talks frequently about the mass formation psychosis especially since they are going back and forth with Scott Adams on this. https://noagendaquery.com/?q=%22covid%22+AND+%22psychosis%22

IMO, the way forward to reach a critical mass of accounts and consequent reach of alternatives to the giants is for individual States to begin using the alternatives. First in parallel while simultaneously providing a target date for compliance with neutrality provisions for otherwise lawful content. Obviously FB or Twitter would not be required to adjust their policies but the State could certainly refuse to use their platforms in favor of alternative platforms if they decline.

The States have untapped leverage with the tech platforms which they have yet to use. Similarly they have begun to use their State Pension fund business as leverage with financial services that seek to ban or withhold services from lawful industries; firearms. A loose coalition of States working to prevent abuse of disfavored industries and opinions has the potential to be very influential.

The seem to be daring Congress to regulate them, and even with the progressives’ control of the Executive branch, they may still find themselves regulated like traditional media. They seem to know no bounds in their zeal to censor anyone who disagrees with The Narrative.

I have noticed an unusual number of liberal trolls on this particular article, and on another site that had an article about censorship. These are the sort of coincidences that I notice.

Unfortunately, I have to watch the progressive fascist news. I noticed that they and Dem politicians have been talking about dangerous speech and how it should be banned. This is a clear step toward tyranny.

Why are conservatives still on Twitter? I’ve never used it and don’t care about it….WALK AWAY!

You go where the people are, they don’t come to you. Silicon Valley Stalinists don’t mind conservative ghettos because they will never be seen by one persuadable voter.