San Francisco: Arrest Of Man Accused Of Stealing School Board Recall Petitions Highlights Need For Clarity On What Constitutes “An Attack On Democracy”

San Francisco: Arrest Of Man Accused Of Stealing School Board Recall Petitions Highlights Need For Clarity On What Constitutes “An Attack On Democracy”

The accused was first identified by social media sleuths. 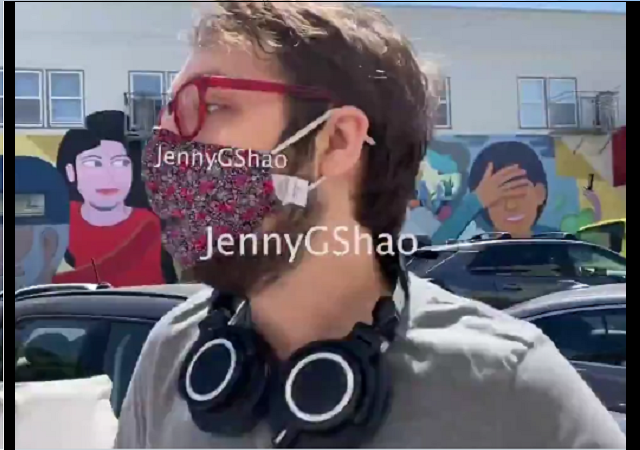 Citizens of San Francisco initiated the campaign to recall its school board because San Francisco Unified was too preoccupied with racial politics to bother to reopen schools: readers might remember that SFUSD attempted to rename its campuses under some overarching woke rationale.

They angered public school parents by ending merit admissions to the prestigious Lowell High. The move is widely seen as anti-Asian because Asian-American students are over represented in the preparatory academy, and because officials had made some racist statements.  Among the three Board members targeted by the recall is the barely verbal Gabriela Lopez, along with Alison Collins who once accused Asian Americans of using “white supremacist thinking to ‘get ahead,’”and their less distinguished comrade Faauuga Moliga.

And so, on May 30, 2021, an immigrant father Man Kit Lam was manning the recall table at Richmond District Farmer’s Market together with the local photojournalist Jenny G. Shao when a youngish-looking man with light brown hair wearing a floral mask, and nerd glasses in thick red frames walked up to the table, grabbed a clipboard with signed petitions, and ran. Lam gave him a chase as Shao filmed the incident.

Lam caught up with the offender, shouting “You took the petitions, I saw you!”. As he tossed the clipboard under a parked car, the perpetrator countered “I looked at it, I decided I didn’t want it anymore I don’t have your s****!” Lam insisted that some of the documents were missing from the clipboard, and eventually the Floral Mask got them out of his back pant pocket, proceeding to play victim: “If you are preventing me from leaving, I am gonna sue u so get the f**k out touching me or I’ll sue u for assault!”

At the end the suspect left, and the incident was referred to the San Francisco Police Department. Lam and Shao turned to social media for help in identifying the thief.

If San Francisco had a big Antifa presence, no doubt the Floral Mask would have been smarter about wearing a proper disguise. He’d have black jeans, and a black hoodie. Contact lenses in place of distinct eyewear. Instead, he peacocked his hipster doofus identity.

What gave him away were the red-framed glasses. Chinese American writer Jenny Chan looked through some Facebook pages, and found the match for the pair of spectacles. She zeroed in on a picture of a youngish white man with slightly more light brown hair, dressed in a floral button down shirt, holding a fuchsia-colored drink, and sporting a smug smile. He looked very similar to the Farmers Market ballot thief. And where was the photo taken but at the Richmond Democratic Club 2019 summer soirée attended by several local elected officials, including Alison Collins and  District Attorney Chesa Boudin, the latter is the son of four Weather Underground terrorists (two biological parents, and two adoptive) facing not one but two separate (just in case) recall campaigns.

Having identified the red glasses in the soirée picture, Chan located the alleged perpetrator’s Linkedin account, which for the first time put the name to the picture — Jason Kruta. Since then, Kruta removed the photograph and changed his handle to Jason K, but Chan has receipts.

The Twitter user who goes by @TackOfThe looked through the images saved on Kruta’s Facebook page. He compared the profile of the alleged thief captured by Shao to profile pictures posted by Kruta, finding an identical mole on the earlobe. That’s some pretty darn interesting amateur detective teamwork.

Kruta is a member of Democratic Socialists of America and the San Francisco League of Pissed of Voters — the usual melange of the Bay Area commie-ish political organizations. He comes across as a Democratic Party and Bernicrats gadfly, photographed multiple times with their prominent local members. Last summer, he was interviewed about why it’s safe to attend a Black Lives Matter protest in a mask for an issue of GQ magazine.

Since the man was accused of meddling with the electoral process, he has been dismissed from his non-profit job. I strongly oppose this punishment. Kruta should keep his job, and his friends, and instead face the criminal penalties prescribed by law if found guilty. One of the purposes of criminal law is to provide transgressors with a way to pay their debt to society without being ostracized. In Kruta’s case, in particular, he appears to be unable to hold a job for longer than a year, and his friends won’t abandon him over a small transgression like voter suppression for the right cause.

Having said that, Kruta’s Democrat Party comrades need to distance themselves from alleged electoral fraud as soon as possible, and unequivocally condemn such behavior. This is not what’s happening, this is not what happened.  Curiously, while local politicos were all up in arms about “voter suppression” in Georgia, or demagogued about “restoring voting rights” to parolees, it’s all radio silence when it comes to the attempted destruction of ballots of the ordinary, law-abiding in San Franciscans.

If anything, the affair highlights the urgent need for an election integrity reform like Georgia’s. If someone is brazen enough to snatch election documents in a broad daylight, and in a crowded marketplace where it was virtually guaranteed that someone would pull out a camera and shoot, what is he capable of doing when no one is looking?

Socialists, especially those of communist variety, tend to believe that the ends justify the means. A little tampering with the democratic process is a small transgression compared to the murderous Red Terror that followed the Bolshevik Revolution in Russia. Nor do they believe that the American system of government is worth preserving. And if they see themselves above the rules to which we all adhere as citizens, why should they obey by them? While I can’t read his mind, Kruta is a member of multiple socialist organizations that do not feel themselves limited by morality codes.

Because politics attracts corrupt people, to doubt all political actors is a healthy strategy. The integrity of the electoral process is something to be be diligently guarded at all times. However, it’s especially foolish to trust people and organizations that announce that they consider their cause so righteous that they will use any means necessary to achieve it.

Jason Kruta was finally taken into custody on September 28, 2021, and is being charged with a misdemeanor. Of course, he is “presumed innocent.”

In the meantime, the woke San Francisco socialists apparently received the message that election interference is an acceptable form of political action.

In August, a crazed woman with scissors removed a Recall Chesa Boudin banner belonging to a campaign to recall the current San Francisco District Attorney, and a son of convicted boomer domestic terrorists. The woman, a Boudin donor who teaches woke values to low income youth at a non-profit, has been identified by Jenny Chan. Although her identity is an open secret in the Bay Area, we can not reveal it at this time.

Over the last weekend, a volunteer collecting signatures to recall Boudin was harassed by a group of District Attorney’s supporters. While he was on the phone reporting the offense to police, Boudin’s supporters stole some of the signature pages. The incident was not recorded on video, but the narrative circulated on social media.

Will we see justice served? In a city in the grasp of anarchy where the rich and politically-connected like Collins, Lopez, and Boudin get their way, their foot soldiers are allowed to run amok. Voting is easy around here, and tampering with an election is not a crime if it’s done to favor the left. San Francisco (and California) might be too far gone to be saved, but it is an example to others.

But concerned parents who speak out at local school board meetings will be investigated by the FBI as extremists and domestic terrorists.

Talk about someone deserving a million punches in the face.

Violence is the only language they speak, and this Rosetta Stone should teach us how to deal with the cretins of society.

Still, B-slapping this paragon of Marxist masculinity would require a lot of time and energy.

Surely there are better ways to let him know you love him, and still make it to work on time… 🙂

At which point things like this will no longer happen – not because the petition snatcher will be set upon, but because the citizenry will forego the entire recall process and drag the school board from their offices and tar and feather them in the streets.

I hear what you are saying, and I most certainly agree with your last paragraph.

This being a legal beagle site though, and there are many legal beagles here who I am sure can say this in a better way than I will or they will disagree harshly, but the police exist to protect the system and maintain order. They don’t have any duty to individuals.

I am not a lawyer and I didn’t stay at the Holiday Inn Express last night.

Since the man was accused of meddling with the electoral process, he has been dismissed from his non-profit job. I strongly oppose this punishment. Kruta should keep his job, and his friends, and instead face the criminal penalties prescribed by law if found guilty. One of the purposes of criminal law is to provide transgressors with a way to pay their debt to society without being ostracized

Would you have continued to employ him?

In any case, he wasn’t fired for his crime; he was fired for getting caught, and thus embarrassing the employer.

While I agree he was fired for, as his employer sees it, bringing discredit upon his employer, would we even know his employer if he hadn’t been fired? This is the Streisand Effect in operation.

What do you expect when we’re told to “move on” from 2020 and are disparaged for pointing out that the Presidential Election was NOT the “most secure” in history?

You get more rigging: rigged gubernatorial recalls, election tampering, real voter suppression with vote-flipping machines, dilution of honest votes with thousands of fake votes at vacant addresses….need I go on?

Well, if it was okay for the NBPP to stand outside and threaten voters in Philly we should be able to do the same, but covertly.
Catch my drift?

Poster child for the obnoxious, vindictive, privileged, lawless, entitled, narcissistic and totalitarian brats that the institutions of Higher Indoctrination (so-called “higher learning”) are churning out by the millions; in this case, Columbia University.

This is a big nothing compared to the way they stole the 2020 presidential election.

Meh. This sort of thing is pretty commonplace; removing campaign signs. Snatching a clipboard seems an unwelcome escalation. At a minimum the d/progressive should be hounded until they they either renounce or endorse these tactics. Once they sign off on this escalation and anything short of denunciation is, IMO, an endorsement then turnabout is fine.

“…then turnabout is fine.”

Another registered member of the Pansy Party.

Jobs are expendable in Biden land. He’ll probably get paid more to tweet from home with these ridiculous policies.